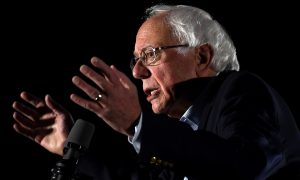 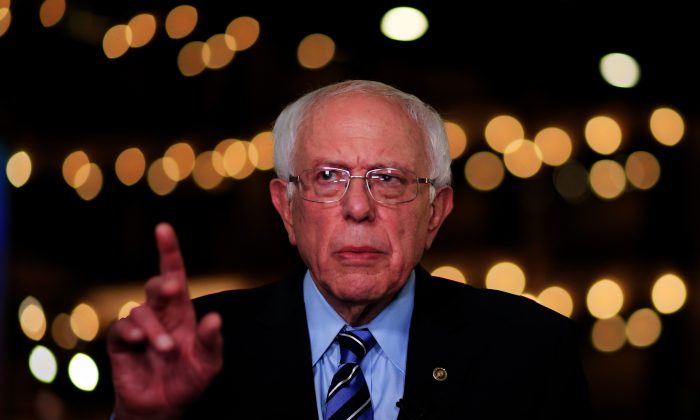 In previous articles, I have pointed out some of the verbal hijinks involved in devious, chameleon-like use of the words “democratic socialism” as well as Sanders’ own tendency to peddle slippery snake oil. Here he outdoes himself. President Donald Trump’s policies are by no means purely free-market policies, but what makes him “the worst kind of socialist” to Sanders is the simple, obvious fact that Trump isn’t a socialist.

In this essay, however, Sanders redefines “socialism” once again. (Indeed, for Democrats now the definition of “socialism” will remain fluid and ever-evolving—trying to make it difficult for Republicans to score a direct hit on a moving target.) Here, “socialism” has the benign but misleading meaning of “government help.” The problem, according to Sanders, is that Trump and conservatives bestow financial assistance upon corporations instead of the “little guy.” What rings hollow about his scolding of Trump for practicing “corporate socialism” is that he conveniently ignores Democratic involvement in such schemes (e.g., President Barack Obama with his lavish subsidies to green boondoggles).

What Sanders calls “corporate socialism” is variously known as “cronyism,” “favoritism,” “corporate welfare,” “rent-seeking behavior,” and “special-interest politics” with the rich and powerful often being the favored special interests. He apparently doesn’t realize it, but in the broadest sense, in denouncing the government bestowal of privileges, Sanders is, in effect, denouncing the government redistribution of wealth.

I am all in favor of ending legislated privileges (the word “privilege” comes from two Latin words meaning “private laws”—i.e., laws that benefit some which inevitably come at the expense of others). The government bestowal of privileges is the antithesis of the American ideal of the rule of law.

In denouncing this entrenched practice, I find myself cheering Sanders. However, I disagree with his proposed remedy. Instead of abolishing or curtailing privileges, he wants to expand the practice, prioritizing government aid for the average (or poor) citizen instead of large corporations. While using government to assist the poor and weak is less offensive to our common sense of justice than favoring the rich and powerful, it remains morally objectionable, economically unaffordable, and politically problematical.

Sanders’ socialism exalts privilege above the rule of law, practices discrimination (only against different groups of Americans), and tramples individual liberty by giving government the power to decide how citizens’ wealth is to be spent.

Indeed, once you accept your basic principle of government—that government’s legitimate function is to redistribute wealth—it’s literally impossible for that government to serve all the people impartially and justly.

The only kind of government that comes close to the rule of law—i.e., benefiting all the people instead of privileged groups—is a strictly limited government such as our Founding Fathers tried to devise. That government was designed to help everyone by keeping everyone free (sadly, only everyone who was white) and leaving all citizens free to figure out how to use their freedom to survive and, hopefully, thrive economically. Alas, the temptation to use government to enrich oneself beyond what one can earn by creating value for others in free markets has proven irresistible. Indeed, Sanders himself would never have become a millionaire had he not taken the political shortcut to wealth.

Sanders decries the injustice of the federal government bailing out Wall Street while people on Main Street suffered during the last decade’s Great Recession. He’s right, of course, that those policies weren’t fair. But he leaves out the crucial context: Wall Street and Uncle Sam are joined at the hip.

If Sanders wants to be completely honest about the privileged treatment that Wall Street received, he needs to acknowledge federal culpability. After all, what has caused the federal government’s colossal indebtedness and borrowing has been the exorbitant deficit spending voted for by, among others, Sanders himself.

Following are a few brief comments about factually challenged assertions in Sanders’s essay:

“Carbon emissions are destroying the planet.” No, carbon dioxide emissions are greening the planet. Yes, utility bills are higher in many places, but that’s not due to the free market, as Sanders alleges, but the product of a government-distorted market. Citizens have had to pay for more expensive sources of energy (e.g., wind and solar) that are major recipients of “corporate socialism/welfare,” while Obama throttled cheap coal with hyper-regulation. (Note: There is no need for politicians to sabotage coal; market forces, such as increasing the supply of natural gas through fracking, will do that anyway.)

No, Amazon is not a “monopoly.” They are the latest in the long line of corporate behemoths that dominate over several decades, only to eventually succumb to market forces and shrink or disappear. I do share Sanders’ disgust with the tax breaks that municipalities use to lure giant corporations to their communities (such political interference smacks more of socialism than free markets), but under real socialism, all new large-scale enterprises operate wherever the government tells them they have to operate.

Does Sanders want to help “public schools” or public school pupils? How about getting on board with school choice, Bernie? Ah, but socialists believe in total state control over education, which means children must go to the school to which government assigns them.

Sanders invokes FDR’s Bill of Economic Rights. “Economic rights” is one of the greatest misnomers anywhere. FDR listed worthy aspirations. We should aim for a society wealthy enough for all to afford health care and housing, have rewarding job opportunities, and achieve a financially secure retirement, but these can never be “rights.” Why not? Because if someone has a “right” to a certain benefit, someone else must be legally obligated to provide it.

Sanders cites the mildly interesting but essentially irrelevant factoid that “The wealthiest three families now own more wealth than the bottom half of the country.” But confiscating all their wealth (a sum in the general vicinity of $300 billion) not only would not fund the expanded Medicare and Social Security that Sanders wants (not to mention the astronomically expensive Green New Deal), but also it’s not even enough money to balance the budget in the current year. Indeed, all the wealth of the top 1 percent would soon be dissipated in the socialist paradise that Sanders wants.

Apart from the specific errors liberally sprinkled throughout Sanders’s essay, the overarching error is an obtuse ideological refusal to perceive and acknowledge the fundamental realities of socialism and free markets. After mutilating the definition of socialism in his title by calling Trump a socialist, Sanders’s subtitle states, “His policies coddle fellow oligarchs while leaving ordinary people at the mercy of the free market.”

Sanders clearly despises the villain called “monopoly,” which he regards as one of the evils of free markets. But if monopolies are bad, then he should reject socialism, which is an entire system of monopolies. Under socialism, government is the monopoly owner/operator of all major industries. It’s socialism that is merciless, not free markets. Under socialism, workers must work where the state wants them to work. In a free market, there is mercy for the worker in the sense that employees are free to quit a job with an obnoxious boss or unsatisfactory working conditions and go to work for someone else.

A consumer in a free market mercifully has choices: Businesses must cater to consumers’ tastes or lose revenue to competitors who better serve those desires. Under socialism, the quality of goods and services tends to stagnate or deteriorate for the simple reason that the monopolist provider (the state) has no competition to worry about. Thus, the state arranges production in whatever way it wants, having no mercy for consumers, but essentially telling them, ”Take it or leave it.”

Sanders weirdly attributes every economic setback or challenge to the deficiencies of heartless free markets, while characterizing a socialistic government as a reliable, compassionate endless cornucopia of economic benefits. That is historical blindness on a breathtaking scale. Free markets have produced unprecedented prosperity for human beings. Socialism—real socialism that claims to champion the interests of “the little guy”—has impoverished and crushed the hopes and lives of hundreds of millions of people.

Sanders isn’t pushing run-of-the-mill snake oil here. He is propagating an error that would damage the lives of hundreds of millions of people. Let the voter beware.