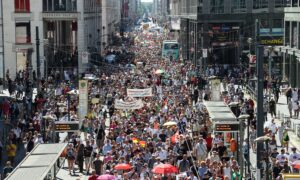 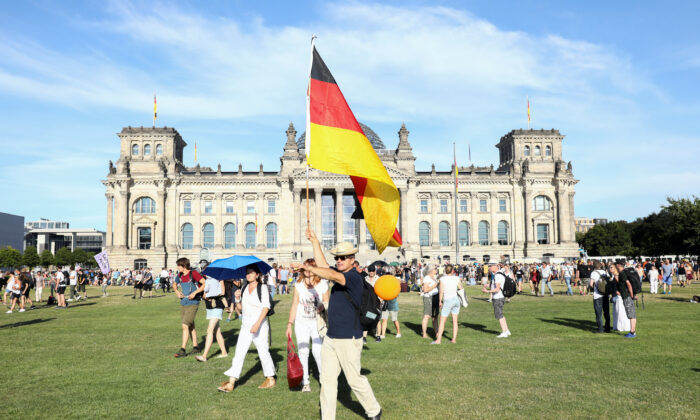 A demonstrator holds a German flag near the Reichstag during a protest against the government's restrictions imposed over the coronavirus outbreak, in Berlin, on Aug. 1, 2020. (Christian Mang/Reuters)
Europe

BERLIN—The city of Berlin will put thousands of police on the streets at the weekend to enforce a ban on demonstrations opposing measures imposed to stem the coronavirus pandemic after marchers at a recent rally failed to wear masks or keep their distance.

Andreas Geisel, the Berlin interior senator, said the authorities had decided to ban the protest after weighing up the importance of the right to freedom of assembly with the need to protect people against infection.

“We are still in the middle of a pandemic with rising infection figures,” he said.

Germany has managed to keep the number of COVID-19 cases and deaths relatively low compared with some other large European countries, but the number of new daily cases has been rising steadily since early July and has accelerated in recent weeks.

Geisel said the organizers of that protest had deliberately broken rules they had previously agreed with police, including wearing masks and maintaining social distancing.

“Such behavior is not acceptable. The state cannot be given the runaround,” he said, adding he did not want Berlin to be a stage for conspiracy theorists and right-wing extremists.

The highly conservative Alternative for Germany (AfD) party said it would call for a rally at the Brandenburg Gate against the ban.

“The Senate is trampling on fundamental rights,” the Berlin wing of the party said in a statement.

Geisel said several thousand police would patrol the German capital at the weekend and warned of the potential for violence, saying that he and the police had received threats.

Early in the pandemic, Berlin police detained more than 100 people at an unauthorized demonstration against the lockdown. In June, police in the Netherlands detained some 400 people at a protest against social distancing measures.