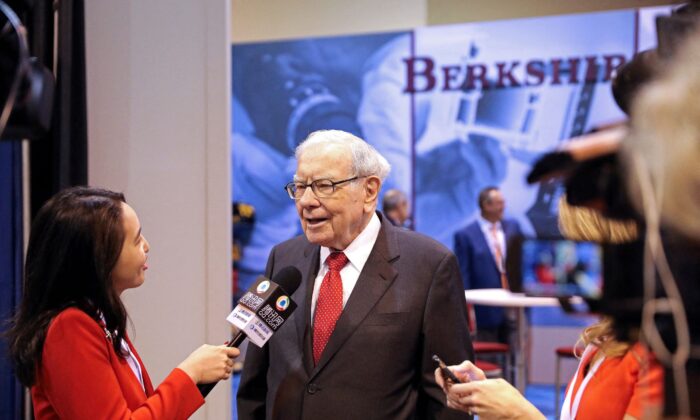 Warren Buffett’s Berkshire Hathaway Inc. on Saturday said fourth-quarter profit swelled, boosted by gains in many of its businesses and common stock investments such as Apple Inc., and said annual earnings reached a record high.

Berkshire also signaled renewed confidence in its own stock, repurchasing $6.9 billion in the quarter, and boosting total buybacks in 2021 to a record $27 billion. Buffett said Berkshire has repurchased another $1.2 billion of stock in 2022.

He also expressed confidence in Berkshire’s dozens of operating businesses such as the BNSF railroad and Geico auto insurer, after having gone six years since a major acquisition and letting Berkshire’s cash stake swell to $146.7 billion.

Results benefited from insurance underwriting gains, higher profit from BNSF, and currency fluctuations, among other factors.

Net income rose 11 percent to $39.65 billion from $35.84 billion, with both totals reflecting large gains from stocks such as Apple Inc. Apple alone represents 46 percent of the $350.7 billion of stocks that Berkshire owns.

Analysts on average expected operating profit of $4,251 per Class A share, according to Refinitiv I/B/E/S.

Buffett considers net income a misleading performance measure because it includes gains and losses from stock holdings, regardless of what Berkshire buys or sells.

Berkshire’s share price rose 30 percent in 2021, topping the 29 percent gain in the Standard & Poor’s 500 including dividends, and ending two years of significant underperformance relative to that index. They are also outperforming in 2022.