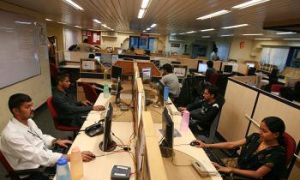 Boom and Bust: The Impact Outsourcing in Hi-Tech
0 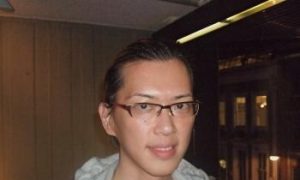 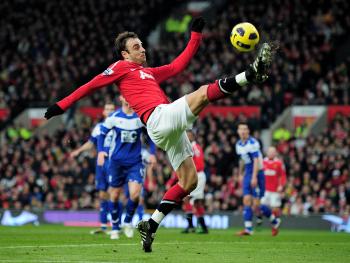 By Denis Charlton
Print
Manchester United striker Dimitar Berbatov registered his third hat-trick of the season as the Premier League leaders clinically brushed aside the challenge of Birmingham City 5–0 at Old Trafford on Saturday.

When the two teams met back in December, Lee Bowyer spoiled Sir Alex Ferguson’s Christmas with a last gasp equalizer for Birmingham in a hard fought 1–1 draw.

Saturday’s encounter proved to be a very different affair with United setting the agenda in only the second minute of the game. Ryan Giggs chipped a corner to the near post where John O’Shea, making his first start since November, stooped to flick the ball on with a clever back header that found Berbatov unmarked in front of goal.

Wayne Rooney made the second for his strike partner and the Bulgarian slotted the ball home with aplomb.

Giggs is playing like a man 10 years younger right now and on the stroke of halftime he finished well for United’s third after an impressive build-up involving Berbatov, who somehow managed to rob Alexander Hleb of the ball while lying flat on the ground, and Wayne Rooney.

With United three goals to the good at the break it already looked like game over but they were by no means finished. The second half was only seven minutes old when Giggs, Rooney, and Berbatov combined yet again to set up the latter for his hat-trick.

Nani completed the formalities on 75 minutes with a trademark cut inside and left-footed shot from 20 yards that was too good for hapless ex-United keeper Ben Foster.

Sir Alex Ferguson was understandably delighted with his team, saying on the Premier League website that, "It was a marvelous performance from Dimitar. He could have scored more. We were a bit wasteful with our finishing at times but you can't complain at the performance. We hope the goals are going to come for Wayne [Rooney]. He is working his socks off."

Dutch international Robin Van Persie scored all three goals for Arsenal in a routine 3–0 demolition of Wigan Athletic, and would have had a fourth had he not skied a 69th minute penalty kick over the bar.

The pick of the goals was the second, which came after 58 minutes. Cesc Fabregas floated a sublime 30-yard pass over the Wigan defense which van Persie managed to get on the end of . He expertly volleyed the ball home with his left foot.


Manchester City were in second place before the day’s fixtures kicked off, but have now been overtaken by Arsenal after going down 1–0 away to Aston Villa.

Making his debut for Villa, Darren Bent netted the very first chance that came his way when Joe Hart could only parry a shot from Ashley Young.

Only 18 minutes had gone when the goal was scored and there should have been plenty of time for City to come back. They certainly dominated for long periods and had several chances, but the closest they came was when Edin Dzeko hit the frame of the goal.

It was a stalwart performance from the Villa defense in which centre backs Richard Dunne and James Collins were outstanding.

It finished 1–1 at St. James Park as Aaron Lennon grabbed an injury time equalizer for Tottenham, canceling out Fabricio Coloccini's 59th-minute goal for Newcastle. The single point means that Spurs remain fifth in the table.

Everton and West Ham drew 2–2 at Goodison Park. The Hammers twice led; firstly through American Jonathan Spector before Diniyar Bilyaletdinov pulled the home team level and again thanks to a well-taken header from Frederic Piquionne in the 84th minute.

But Everton refused to give in and tied it up a second time courtesy of a Marouane Fellaini strike after the 90 minutes were up.

Sunderland showed there is certainly life after Darren Bent with a 2–1 win away at Blackpool A pair of first half goals from Kieran Richardson, his first of the season, proved enough to secure the points.

Charlie Adam scored a penalty for the home side five minutes from time but it was too little too late. The Black Cats remain sixth in the table just one point behind Spurs though having played a game more.

Fulham completed a league double over Stoke city with a 2–0 victory at Craven Cottage. American Clint Dempsey put the hosts ahead on 33 minutes and then converted a 55th minute penalty which he had earned himself when upended by Stoke skipper Ryan Shawcross. Shawcross received a red card for his trouble.

Fulham manager Mark Hughes was full of praise for his top scorer, “It was a great finish [by Dempsey] for the first, and a great touch to create the penalty by himself. He always has a positive impact.”