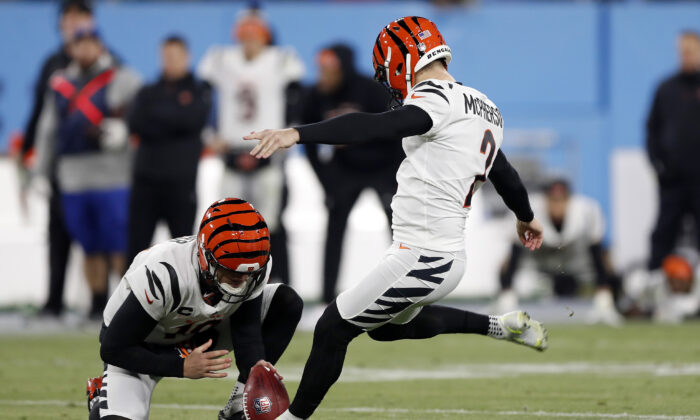 The #4 seeded Cincinnati Bengals (10–7, regular season) persevered nine sacks by the #1 seeded Tennessee Titans (12–5), to kick a 52-yard walk-off winning field goal, 19–16, by Evan McPherson Saturday night in Nashville. For the first time since 1988, the Bengals won their first road playoff game to advance to the AFC Championship.

McPherson is perfect kicking 15 field goals in away games this season, and was successful on four for four attempts on the day.

“Ice in his veins. Rookie kicker. Unbelievable,” said Cincinnati QB Joe Burrow. “He came in, and we knew exactly what we had in camp. You can tell how a kicker is when he walks in the building; how he walks, how he talks to people. That guy is unbelievable.”

Burrow threw for 348 yards on 28 of 37 attempts, with no touchdowns and one interception.

Burrow was sacked five times in the first half, which is third most in for the season. He was sacked nine times total for the game, tying the most in playoffs history, along with losing 68 yards in the process.

Yet the Bengals overcame this because their defense forced Titans quarterback Ryan Tannehill into three interceptions.

Tannehill threw for 220 yards on 15 of 24 completions and one touchdown. He was sacked once for a loss of seven yards.

“Well, I don’t think Ryan or myself, or anybody, did enough to win the game,” said Titans coach Mike Vrabel. “It’s never going to be about one person. Not as long as I’m the head coach.”

There was a foreshadowing on the first play of the opening drive, as Tannehill attempted a deep pass to the right intended for Julio Jones, but was intercepted by Jessie Bates III at the Titans’ 42 yard-line. The Bengals would convert with a 38-yard field goal after gaining 22 yards on six plays.

McPherson kicked another field goal of 45 yards, at the end of the following drive, after the Bengals marched for 61 yards on six plays.

The Titans scored their first touchdown on their fifth drive after going 84 yards on nine plays, culminating in a Derrick Henry three-yard run. Team leading rusher Henry returned in his first game after missing more than half of the season from injury.

The Titans were enticed into attempting a two-point conversion after the Bengals were penalized on the extra point formation with too many men on the field. The conversion failed and the score was tied at six apiece.

Cincinnati answered with another scoring drive of 39 yards, leading to McPherson’s third field goal of 54 yards, for a halftime score of 9–6. The drive ended with a 12-yard loss when Burrow was sacked for the fifth time.

The Bengals scored their sole touchdown on the opening drive of the second half, going 65-yards on nine plays, and ending with a Joe Mixon 16-yard run, to extend the lead 16–6.

Following a second Tannehill interception to Bengals Mike Hilton, the Titans would add a Randy Bullock field goal with 1:36 remaining in the third quarter at the end of a 56-yard drive to get within seven points, 16–9.

The Titans would tie the game following an interception by Amani Hooker off of a deflected Burrow pass.

Tannehill then threw a perfect 33-yard over the shoulder pass to A. J. Brown on the right edge of the end zone. As Brown turned back to the ball, he found the ball placed in the left arm “bread-basket” for a one-handed TD catch, with 0:15 remaining in the third quarter, 16–16.

The fourth quarter continued to be a defensive battle, as Tannehill threw his third interception to Logan Wilson at the Bengals’ 47-yard line.

The Bengals only needed 19 yards on four plays to set up the final play of the heroic 52-yard fourth field goal by rookie kicker McPherson to win the game 19–16.

The Titans had an excellent season, even though they used 91 players, most in the NFL, due to injuries and health protocols.

Tannehill and Bengals head coach, Zach Taylor, are close and have much respect for one another, from Tannehill’s four years at Texas AM, and his stint with the Miami Dolphins.

Another connection between the teams is Titans kicker Randy Bullock, who played for five years with Bengals.

The success of the young Bengals team this season was propelled from being disciplined, as they were the second least penalized team, behind Green Bay, in the league.

“We’re excited. We’re gonna take tonight to celebrate,” said Burrow. “And then we’ll be watching that [AFC] game tomorrow to see who we’re going to play. It’s going to be fun.”

The Bengals face the winner of Sunday’s game between Buffalo and Kansas City, for a chance to contend for the Super Bowl.