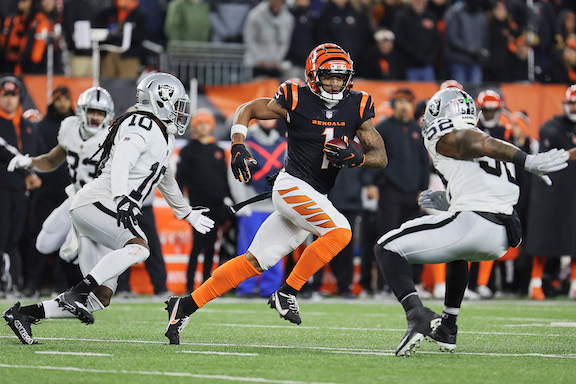 Wide receiver Ja'Marr Chase #1 of the Cincinnati Bengals runs with the ball against the Las Vegas Raiders during the second half of the AFC Wild Card playoff game at Paul Brown Stadium, in Cincinnati, on Jan. 15, 2022. (Andy Lyons/Getty Images)
NFL

Bengals Finally Win a Playoff Game, Hold Off the Raiders 26–19

The Cincinnati Bengals won their first playoff game in 31 years, defeating the Las Vegas Raiders 26–19 on Saturday to a sold-out 66,277 elated fans that cheered loudly in frigid Ohio temperatures at Paul Brown Stadium. The Bengals had not had a playoff win since 1991.

“Happy for the city,” said Bengals young coach Zac Taylor. “I think the city can finally exhale. “They get to enjoy the ride here because we’re not done yet.”

The young Bengals were led by quarterback Joe Burrow, throwing to five different receivers for two first-half touchdowns, on 24 of 34 attempts.

“It’s a great win for us, for the city and the organization, but, you know, we expected this. So, it’s not gonna be a big celebration like it was when we won the division,” Burrow said. “We took care of business, now it’s on to the next round.”

Nine completions went to receiver Ja’Marr Chase, who caught for 116 yards. Chase now holds the record for the most receiving yards, including the playoffs, by a rookie in NFL history.

“It’s a great feeling right now, said Chase. “We needed it for the organization, it’s good to get the job done. “We’re not done though. That was the main thing we talked about [in the locker room immediately after the game], about not being done.”

The Bengals scored on their first four drives; beginning with a 10-play 75-yard drive on their opening possession to counter the Raiders field goal 7–3; the touchdown came from Burrow’s seven-yard pass to C. J. Uzomah. Uzomah would celebrate with the “Icky Shuffle” in the end-zone, replicating the dance made famous by Bengals’ Icky Woods during their last post-season success 31 years ago.

Cincinnati went on to score two field goals by Evan McPherson, and a touchdown from a 10-yard pass to Tyler Boyd, to take a 20–6 lead. The Raiders immediately responded with a 80-yard drive for a touchdown, capped off by a Derek Carr 14-yard completion to Zay Jones, for a Bengals 20–13 advantage at halftime.

Carlson’s 28-yard field goal with 3:37 left got the Raiders within a touchdown 19–26. The scoring drive was successful from converting a 4th and 5 on their 44-yard line, with Carr’s 26-yard completion to Desean Jackson.

The Raiders defense forced the Bengals to a three-and-out, giving the offense a potential tying drive beginning on their 35 yard-line with 1:51 remaining.

The Raiders marched to the Cincinnati 9-yard line with a first and goal, but were unsuccessful in scoring the needed touchdown—the fourth down play ended with an interception by the Bengals’ Germaine Pratt with 12 seconds to play.

In the loss, Carr completed a whopping 29 for 54 passes for 310 yards and a touchdown, to seven different receivers. Josh Jacobs rushed for 83 yards on 13 carries.

The Raiders made their first playoff appearance since 2016, but have not had a postseason victory since the 2002 season.

“The Bengals beat us today; we came up short today,” Carr said. “Honestly, I’m just trying to hold back emotion because I didn’t plan on that happening. You know, I didn’t expect it to have to go that way. I just felt so confident in the game plan. So, it’s just hard right now. But looking at the season, you definitely have some pieces there. It’ll be interesting to see what happens.”

There were no dances after the victory.

“It felt good,” a relaxed Burrow said after the game. “We could have played better on offense in the second half. So that was disappointing, but thought we played really well in the first half, and made plays when we needed to. The defense stepped up in the fourth quarter. So it’s exciting, and we’re on to the next one.”