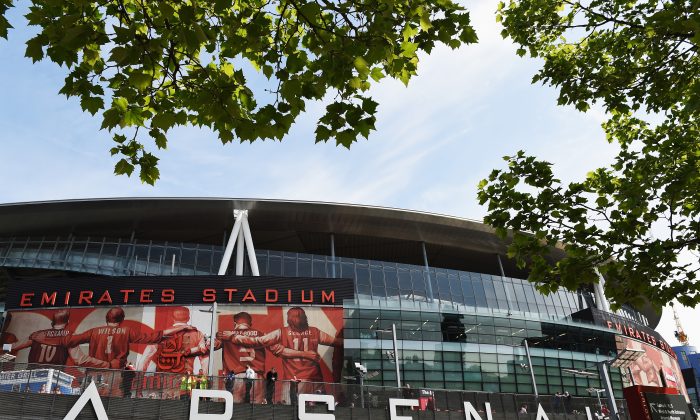 General view outside the ground before the Barclays Premier League match between Arsenal and West Bromwich Albion at the Emirates Stadium on May 4, 2014 in London, England. (Photo by Shaun Botterill/Getty Images)
Soccer

Benfica and Valencia are set to face off in a 2014 Emirates Cup match on Sunday, August 3.

The game will be broadcast on Benfica TV 1 in Portugal, as well as GOL T in Spain.

The Emirates Cup is a pre-season friendly competition.

It has always been hosted by Arsenal F.C. at the Emirates Stadium in Holloway, London.

The two-day competition, which is named after Emirates, Arsenal’s main sponsor, was first held in 2007.

For the 2014 edition, Arsenal, Benfica, Valencia, and Monaco are the teams participating.

Arsenal won the inaugural competition with a win against Inter Milan. Paris Saint-Germain and Valencia joined Arsenal and Inter as the first clubs to participate in this competition.

The winners of the Emirates Cup is decided by a point system. Each team will play two matches, and three points will be awarded per win, one point for a draw, and zero points for a lost.

From the 2009 edition on, shots on target was used as a tiebreaker if teams were level on points, goal difference, and goals scored after all the games have been played.