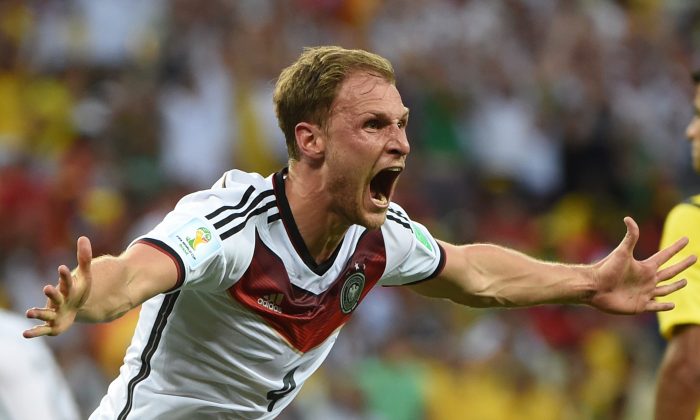 Benedikt Howedes is ready to face Lionel Messi in the World Cup 2014 final.

Although the 26-year-old Schalke defender plays at center back for his club, Germany coach Joachim Loew has been utilizing Howedes as a left back for the entire World Cup.

Howedes being played out of position, and Germany’s left back woes, have been hot topics of discussion by commentators and analyst in the World Cup.

Even Howedes’ former manager, Felix Magath, has predicted that Germany’s “weak point… remains Benedikt Howedes as a wing-back,” according to Sky Sports.

Howedes is, however, aware of his limitations, and is not paying much attention to them.

“I am no Roberto Carlos, who was fantastic at putting in free-kicks and crosses, so I know I am not like him,” said Howedes.

“But there is only one more match where I need to be good, critics and former coaches can judge me to be the ‘weak link,’ but that leaves me cold.

Howedes’s only concerned with Loew’s instructions.

“I just worry about what the national coach thinks and the feedback he gives me, anything else I just shrug off,” Howedes added.

“I just listened to Low’s opinion, it took me a while to come back to elite football after injury last season, I just tried to offer as much as I could at the camps.

“But the fact that I have played the full 90 minutes of all the World Cup matches is fantastic.

“I can barely grasp it myself, but what is important now is to take the last step and crown our performances by winning the title.”

Howedes is also not too concerned about Argentina ace forward Lionel Messi.

“Messi is one of the best players in the world, but just as I said before the Portugal game when we faced Ronaldo, we have to defend as a team,” he said.

“We have to stifle his opportunities to score goal and create dangerous situations.

“Many people are giving us slaps on the back and we love the compliments, but we can’t make the mistake that it’s already over, far off it.

“People are saying in Germany that the title is almost in our pocket, but the Argentinians will fight to take the title home.

“We’ll have to do all we can to make sure that doesn’t happen.

Howedes concluded, “We also know the time is ripe now, if we don’t (win it), the semi-final victory will just be consigned to the archives of history.”