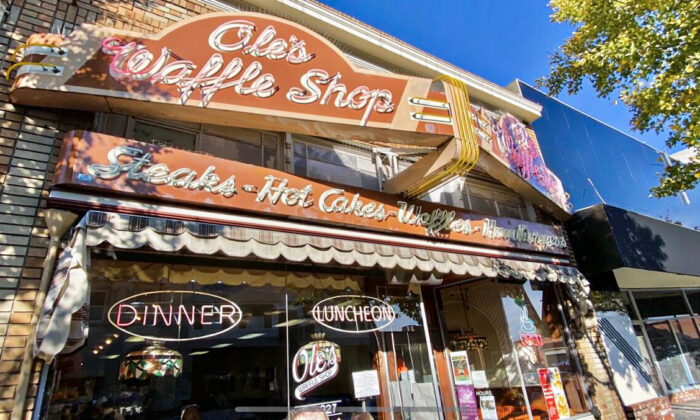 ALAMEDA, Calif.—After four decades of serving customers at Ole’s Waffle Shop in Alameda, longtime waitress Dolores Jeanpierre retired on Dec. 14. Her regular customers stopped by the shop on her last day to express their gratitude.

In an interview with NTD Television, Jeanpierre, her co-workers, and customers of the restaurant shared their fond memories from years gone by.

She was hired in 1978 and worked at Ole’s for 42 years. She shared that the restaurant, her co-workers, and the customers mean everything to her.

“Ole’s means to me … it’s in my heart. It’s like family. It’s a personal meaning for me. It’s not just a restaurant job or a coffee shop. It’s a deep feeling for me. It’s very deep. I love everything about it,” Jeanpierre said.

She said throughout the years, it was the kindness of her co-workers and appreciation from her customers that kept her coming back to the restaurant.

“Well, 28 years coming out of Fremont … I’d get up at 3 in the morning, and I leave Fremont at 3:30, get here at 4 o’clock, open the doors at 5:30 for the customers,” Jeanpierre said. “Just the appreciation they showed back to me kept me going, and that’s why I didn’t want to leave.”

She said the most important advice she can give to people, no matter their occupation, is to be kind.

“It’s to treat people very nice and very kind. Treat them the way you want to be treated, no matter who they are,” Jeanpierre said. “We had a lot of Raiders customers … a lot of the Oakland A’s, you have the Warriors, but everybody is equal.”

The store owners and staff say that they will miss Jeanpierre and that she’ll always be part of the family.

“She’ll always be a part of this business. She will never go away. We’ve got sketches of her, drawings of her, paintings of her, as we do all of our employees,” Ken Monize, co-owner of Ole’s Waffle Shop with his wife Vickie, said. “We can put any painting of a bird or whatever up on the wall, but we choose to put our employees on the walls because those are the people that make this business work. It’s not me, it’s not my wife. It’s the staff. It’s the community. It’s the customers.”

Longtime customers visited the restaurant to give her gifts and flowers, sign her retirement journal, and say their farewells.

“We’re going to miss her a lot,” customer Steven Rundle said. “She’s very friendly, making sure my coffee cup was always full and always came and talked, took the time to stop and talk and see how everybody was doing.”

Rundle said he has known Jeanpierre for many years and attended football games with her.

Keith Garrard, another customer and longtime friend, said Jeanpierre always remembered people by name and made everyone feel welcome in the restaurant. He described the first time she greeted him by name. He said he had only been in Ole’s once and he returned more than a month later.

He said Jeanpierre would chat with customers and continue chatting with them as she waited at other tables. Eventually, others would join the conversation until the restaurant was filled with joyful discussion. Garrard fondly calls it the “Ole’s ambiance.”

Jeanpierre has made 42 years of wonderful memories with her customers and co-workers at Ole’s Waffle Shop. She said it is time to relax and take it easy. But she’ll still be around to catch up with the friends she has made over the years.