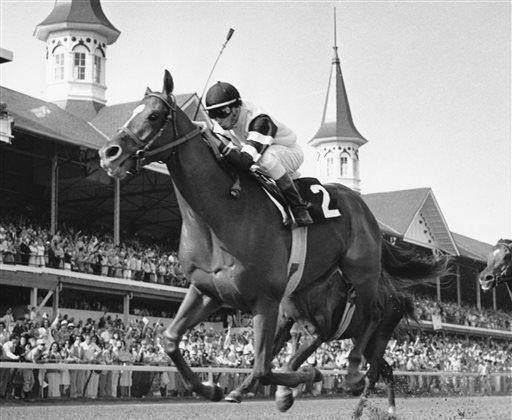 In this May 6, 1978 file photo, Affirmed, with jockey Steve Cauthen up, crosses the finish line to win the 104th running of the Kentucky Derby in Louisville, Ky. (AP Photo/File)
Sports

NEW YORK (AP) — Eleven 3-year-olds have won the Triple Crown (Kentucky Derby, Preakness andBelmont Stakes). Twenty have failed by losing in the Belmont. How they raced in the Belmont.

1978 — Affirmed duels with archrival Alydar for about the final five-eighths of a mile and beats him by a head. The other three starters finish far back.

1977 — Seattle Slew has no problems disposing of seven rivals, leading all the way and winning by 4 lengths.

1973 — In probably the greatest performance ever by a racehorse, Secretariat wins by from 31 to 45¼ lengths over four rivals in 2:24, which still stands as a world record for 1½ miles on dirt.

1948 — Citation leads seven rivals every step of the way and wins by 8 lengths.

1946 — Third with about an eighth-mile remaining, Assault charges to victory by 3 lengths in a seven-horse field.

1943 — Count Fleet gets no competition from two rivals and wins by 25 lengths.

1941 — Whirlaway opens a 7-length lead at midpoint, then finishes in hand for a 2½ length win in a four-horse field.

1937 — War Admiral takes lead shortly after start and holds it for a 3-length win in seven-horse field.

1935 — Shuffled back at the start, Omaha overtakes Firethorn in the stretch and wins by 1½ lengths in a field of four.

1930 — Gallant Fox leads almost all the way and wins by 3 lengths in a four-horse field.

2014 — California Chrome, was fourth with five furlongs to go, ranged up and was set down coming five wide into the stretch, but failed to pick up the pace to finish in a dead-heat for fourth with Wicked Strong.

2008 — Big Brown finishes last to Da’ Tara, the longest shot on the board. Big Brown is rank at the start and fails to respond when Kent Desormeaux asks him to run in the last turn. At that point, Desormeaux eases him up.

2004 — Smarty Jones extends his lead approaching the quarter pole and maintains a clear lead inside the furlong marker. Fights gamely into deep stretch then yields grudgingly while weakening in the late stages to finish second, a length behind Birdstone.

2003 — Funny Cide leads to the far turn, relinquishes the lead to Empire Maker at the three-sixteenths pole, battles along the inside to the top of the stretch then weakens finishing third, five lengths back.

2002 — War Emblem stumbles badly out of the gate then bumps Magic Weisner at start in an 11-horse field. Is rank for three-quarters of a mile and takes brief lead nearing the half-mile pole. Remains a factor to the turn and gives way finishing eighth, 19½ lengths back.

1999 — Charismatic takes the lead briefly at the turn but Lemon Drop Kid and Vision and Verse fly by him on the outside and he finishes third 1½ lengths back.

1998 — Four lengths ahead with an eighth-mile remaining, Real Quiet gets nipped by a nose at the wire by Victory Gallop in a nine-horse field.

1997 — Silver Charm fails to hold off Touch Gold in the final eighth-mile and finishes second three-quarters of a length back, in a seven-horse field.

1989 — Sunday Silence can’t match Easy Goer in final quarter of a mile and finishes second, eight lengths back in a 10-horse field.

1981 — Pleasant Colony, never better than third, finishes a little more than 1½ lengths behind Summing, with Highland Blade second in an 11-horse field.

1979 — The 1-5 favorite, Spectacular Bid leads with a quarter-mile left, but weakens to finish third in an eight-horse field, 3¼ lengths behind Coastal and another head behind Golden Act.

1969 — Majestic Prince closes to second in a six-horse field with an eighth-mile remaining, but he can’t catch Arts And Letters and is beaten by 5¼ lengths.

1964 — Northern Dancer is second in a nine-horse field with an eighth-mile remaining, but he finishes third 6 lengths behind Quadrangle and 4 lengths behind Roman Brother.

1961 — Carry Back never gets into contention and finishes seventh in a nine-horse field, 13¾ lengths behind winner Sherluck.

1958 — Tim Tam is unable to cut in Cavan’s lead and finishes second by 6 lengths in an eight-horse field.

1944 — Pensive leads with a quarter-mile remaining, but he loses by a half-length to Bounding Home in a seven-horse field.