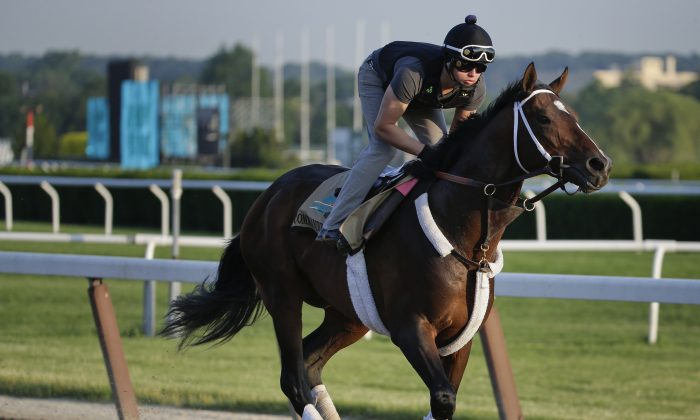 Commanding Curve takes a lap with exercise rider Emerson Chavez up during a workout at Belmont Park Tuesday, June 3, 2014, in Elmont, N.Y. Commanding Curve will be one of several challengers looking to spoil California Chrome's bid at a Triple Crown when they race in the 146th running of the Belmont Stakes on Saturday. (AP Photo/Julie Jacobson)
Sports

The 2014 Belmont Stakes, where fans and others will see whether California Chrome can snag the Triple Crown, is set for June 7.

The post time for the main race has finally been pinpointed at 6:52 p.m. EDT.

The post position draw will take place on Wednesday at 11 a.m.

NBC Sports Network will begin coverage of the races at Belmont Park at 2:30 p.m. on Saturday, through 4:30 p.m.

At that point, NBC will start coverage of the main event.

At 7 p.m., post-race coverage will shift back to NBC Sports Network.

Live streaming for the entire thing will be available via NBC Sports Extra.

Have a look at the updated odds and entries below, via the official website and Bovada.

AURORA, Colo.—A message to horse lovers and dreamers out there: This will not happen to you.

For all the buzz California Chrome’s feel-good run at the Triple Crown is generating for horse racing, his too-good-to-be-true story has virtually no chance of repeating itself, according to the numbers.

The horse that will line up at the Belmont Stakes on Saturday is the product of an unspectacular mare and an equally unheralded stallion, bred in a state not known for producing winners and owned by a couple of racing outsiders who were labeled “dumb asses” for even pondering such a thing.

Byron Rogers, whose business is scientifically analyzing genetic makeup of racehorses, puts the odds at 50,000-to-1 against a horse with the strength and the stamina of a California Chrome ever showing up again among the 21,000 or so thoroughbred foals born each year. It’s the sort of horse that shows up maybe once every three years, but even then doesn’t always find his way into the spotlight because success requires a magic mix of the right owner, trainer and opportunity.

California Chrome was born at well-respected Harris Farms in Coalinga, California, and trained by longtime horseman Art Sherman, the 77-year-old who returned to the big-time nearly six decades after going to the Kentucky Derby as an exercise rider for Swaps, who won the 1955 Derby.

Kentucky Derby and Preakness winner California Chrome jogs around the track with exercise rider Willie Delgado up at Belmont Park, Monday, June 2, 2014, in Elmont, N.Y. California Chrome will attempt to become the first Triple Crown winner since Affirmed in 1978 when he races in the 146th running of the Belmont Stakes on Saturday. (AP Photo/Julie Jacobson)

Assistant trainer Alan Sherman holds Triple Crown hopeful California Chrome as he is bathed after a workout, Monday, June 2, 2014, in Elmont, N.Y. California Chrome will attempt to become the first Triple Crown winner since Affirmed in 1978 when he races in the 146th running of the Belmont Stakes on Saturday. (AP Photo/Julie Jacobson)

“This horse had everything go his way,” Rogers said. “He had just about perfect genetics. Art Sherman is a very good trainer. Harris Farms is a good farm. You couldn’t predict any of this at the start with this horse.”

In fact, Rogers says, if California Chrome’s parents were paired again, odds are only about one out of 10 their offspring would make it to a stakes race.

It’s a reality that horsemen on the lower end of the sport, which is where California Chrome’s owners once lived, are in touch with every day. Most aren’t in it to reach the big time, only to break even with their expenses.

“It’s all about luck and timing,” says Shannon Rushton, executive director of the Colorado horse racing association, speaking recently at Arapahoe Park outside of Denver, where the Kentucky Derby is a distant dream for almost every man and horse. “Every year, you kind of hope that, at some point and time, you might be the one to lead a horse into the paddock on Breeder’s Cup day or Kentucky Derby day.”

The odds, even when the bloodlines are much more refined than California Chrome’s, are very much against it.

Rogers says between only about 3.5 percent of thoroughbreds born each year are good enough to run in a stakes race. Only 20 can make it to the starting line at the Kentucky Derby. And yet, those odds have actually improved over the last decade, since the economic turndown also brought a slowdown in breeding. In 2005, the registered foal crop in the United States totaled more than 35,000. Last year, it was estimated at 21,275, continuing a steady decline that began in 2006.

Still, when owners Steve Coburn and Perry Martin decided to buy an undistinguished filly, Love the Chase, for $8,000 a few years ago and breed her to an equally ordinary stallion named Lucky Pulpit, they knew they were buying into a fairy tale, the likes of which almost never end like this.

“There’s always the dream. I think dreams are great,” said Scott Powell, who owns and trains horses at Arapahoe Park. “But you have to deal with reality, too. It’s not Kentucky Derby or bust.”

While horsemen like Powell appreciate what California Chrome could do for their sport, they recognize the one-in-a-million nature of the whole thing.

“The goal is that they make money to maintain themselves,” said Gilberto Dorantes, running his 3-year-old horse at Arapahoe Park on Memorial Day for the first time after growing up listening to his grandfather’s stories about being a horseman in Mexico. “That’s the goal. To enjoy the horses and have them do what they were bred for. That’s the best thing I can do for those horses.”

Dorantes spent around $500 on Dobes Bee — a far cry from the millions a select handful of very rich owners spend as they look from stable to stable, often turning to science, to find their magic horse.

Rogers said his business of merging data and genetics has burgeoned over the past few years, as big-money investors uncover as much information as possible in the quest to find the right horse to take big.

He doesn’t expect thousands of copycat attempts in the next year, though Ian Tapp, a longtime horseman who keeps tabs on the breeding market, says California Chrome’s success could produce an uptick in breeders in the colt’s home state, much the way the success of Pennsylvania-bred Smarty Jones 10 years ago fueled the horse business in his home state.

“It gives some people at the bottom end of the commercial market some hope that there is an ability for them to have a good racehorse,” Rogers said. “It tells them it doesn’t have to go to (trainer) Todd Pletcher and be raised in Kentucky and have all these other things that trend in favor of other horses.”

Rogers estimates about 40 percent of a thoroughbred’s potential can be predicted by genetics. After that, it’s up environment and then a roll of the dice.

“I know people who are obsessed with (winning the Kentucky Derby),” Powell said. “What a miserable life if that’s all your goal is — to live to try to obtain something that is really not attainable for the average person. They better be doing it for other reasons or it will eat their lunch.”