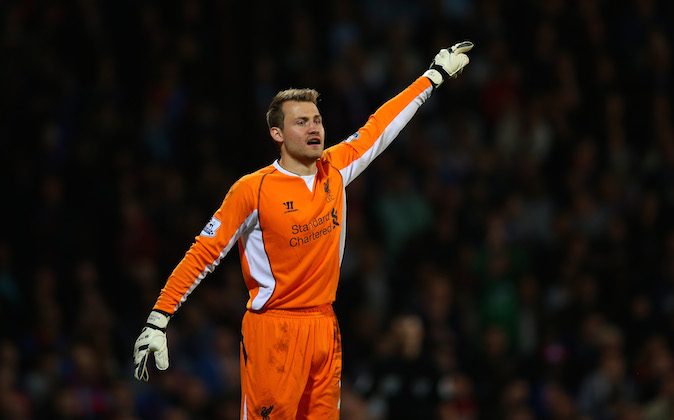 Simon Mignolet of Liverpool directs his defence during the Barclays Premier League match between Crystal Palace and Liverpool at Selhurst Park on May 5, 2014 in London, England. (Photo by Clive Rose/Getty Images)
Soccer

The Belgium vs Luxembourg soccer international friendly match is set for Monday, May 26.

The game will be broadcast on Canvas and Club RTL in Belgium.

Live stream is available on Premier Sports (subscribers only) in the United Kingdom.

According to an AP report, Belgium’s backup goalie Simon Mignolet has a right-leg injury and will miss Monday’s friendly against Luxembourg.

The Liverpool goalie limped off the pitch on Saturday’s training session. The 26-year-old keeper should be fit for the World Cup, though.

Since Belgium’s No. 1 goalie Thibaut Courtois of Atletico Madrid will only join the squad next week, Belgium coach has called up Anderlecht goalie Thomas Kaminski as a replacement.

Wilmots said in a statement that Mignolet “needs to rest four or five days.”

This friendly could also be the chance for Adnan Januzaj to prove his worth.

The 19-year-old attacking midfielder impressed for Manchester United this season, and Wilmots was convinced enough to pick him for Belgium.

While Belgium captain Vincent Kompany has welcomed Januzaj’s inclusion, winger Kevin Mirallas declared last month that the 19-year-old should not go to Brazil because he did not feature often enough for United in the second half of the English domestic season.

Belgium are set to play Algeria, South Korea and Russia in Group H at the World Cup in Brazil.