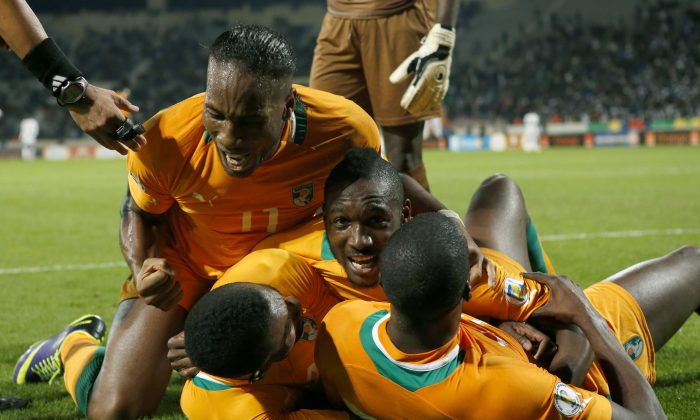 Ivory Coast's Didier Drogba, left, celebrates with his teammates after scoring a goal in a World Cup 2014 qualifying match between Ivory Coast and Senegal at Mohammed V stadium in Casablanca, Morocco, Saturday Nov. 16, 2013. Ivory Coast qualified for the World Cup tournament by beating Senegal 4-2 on aggregate in a playoff for next year's finals in Brazil after a 1-1 draw. (AP Photo/Abdeljalil Bounhar)
Soccer

The game will be played at Stade Roi Baudouin, or King Baudouin Stadium, in Brussels.

The game will be broadcast on Club RTL and Canvas in Belgium. A live stream isn’t listed for the Ivory Coast.

Belgium is currently ranked 11th in the FIFA international rankings while the Ivory Coast is ranked 23rd. Both teams made it into the 2014 World Cup, which begins in June.

Belgium is coming off two losses in friendly matches, vs Japan and Colombia.

The Ivory Coast is coming off a win and two draws in World Cup qualifying.

Neither team has played since November.

Belgium is slightly favored to win this match.