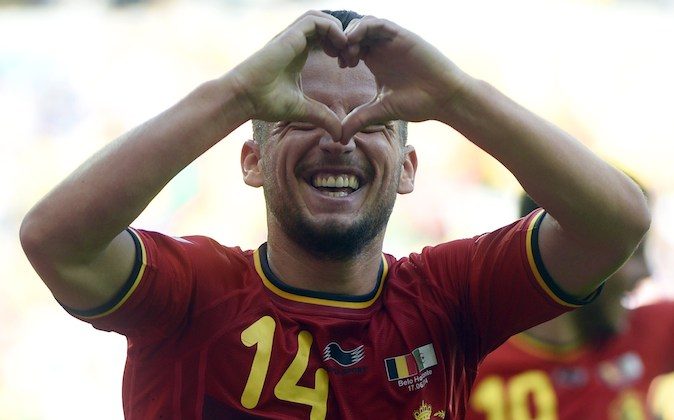 Belgium's forward Dries Mertens celebrates after scoring during a Group H football match between Belgium and Algeria at the Mineirao Stadium in Belo Horizonte during the 2014 FIFA World Cup on June 17, 2014. (MARTIN BUREAU/AFP/Getty Images)
Soccer

The Red Devils came from behind after trailing Algeria at half-time courtesy of Algeria attacking midfielder Sofiane Feghouli’s penalty conversion in the 25th minute.

Here are the highlights.

Check out his goal below.

He was assisted by Kevin De Bruyne from a cross.

The big central midfielder leap into the air and powered a header into the top right corner of the goal from the center of the box.

Algeria led the match 1-0 thanks to a Sofiane Feghouli goal.

Feghouli converted a penalty for Algeria following a Jan Vertonghen foul on him in the penalty box.

The Belgium defender got a yellow card for his “efforts.”

Check out a video of the incident below.