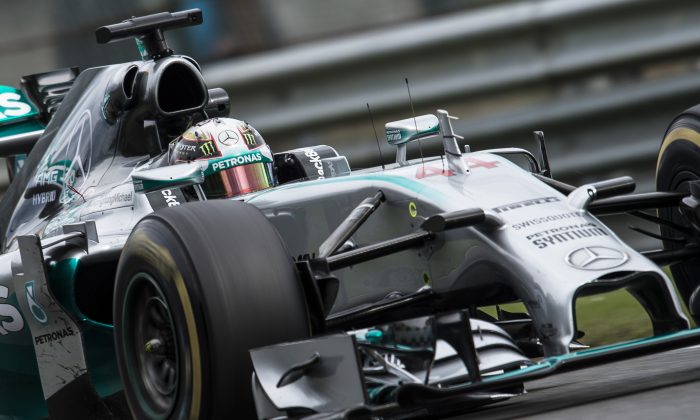 British Lewis Hamilton of Mercedes AMG Petronas F1 Team drives during the second practice session at the Spa-Francorchamps circuit in Spa on August 22, 2014 ahead of the Belgium Formula One Grand Prix. (NICOLAS LAMBERT/AFP/Getty Images)
Europe

The 2014 Belgian Grand Prix is set for Sunday, August 24, at Spa-Francorchamps circuit, near Spa, and the towns of Stavelot and Francorchamps.

It’s also being broadcast on BBC in Belgium, Sky Sport in New Zealand, and Fox Sports in Mexico, Central America, and South America.

It will also be shown on RTL or Sky Deutschland in Germany, RTL in Ireland, TSN in Canada, OTE TV in Greece, on M1 in Hungary, Sky F1 in Italy, MTV Max in Finland, Polsat Sport in Poland, SLO 2 in Slovenia, Sport1 in The Netherlands, Nova in the Czech Republic, TV3+ in Denmark, SportTV in Portugal, Abu Dhabi Sports 2 in the United Arab Emirates, and Star Sports 4 in India.

Live streaming is available on CNBC Live in the United States, BBC iPlayer in the United Kingdom, Tenplay.com in Australia, SKY in New Zealand, TELMEX in Mexico, Foxplay.com in Central and South America, Star Sports in India, Sporting Telenet in Belgium, and Nova in the Czech Republic, among other places.

See the current driver’s and constructor’s top ten placings below.

Check out an AP preview by the Associated Press here.

Hamilton Bids to Beat Rosberg to Pole in Spa

SPA, Belgium—Lewis Hamilton finished more than half a second faster than Nico Rosberg in the second practice session of the Belgian Grand Prix on Friday, boosting his hopes of stopping his Mercedes rival from clinching a fourth straight pole position.

There is a third and final practice on Saturday before qualifying begins in the afternoon, where Rosberg will look to secure a sixth pole from the past seven races.

“It looks like we have the quickest car again, but it’s a bit different here than at some other tracks,” Rosberg said. “It will be a long night analyzing everything that we learned today to really nail it tomorrow.”

The F1 championship resumed this weekend following a summer break, with Rosberg leading Hamilton — the 2008 champion — by only 11 points.

Although the Briton leads Rosberg 5-4 in race wins this season, he has retired from two races and has been hindered by technical problems during qualifying in the past four races. He has not started on the front row since qualifying in second place at the Canadian GP in early June, but he was .604 seconds quicker than Rosberg in the afternoon.

Two-time F1 champion Fernando Alonso was third quickest both times in his Ferrari.

The front row remains a long way off for Alonso, however, and even further away for four-time defending champion Sebastian Vettel, who did not take part in the second practice because of technical problems.

Conditions were cool and overcast for both runs, although the rain stayed away on the 7-kilometer (4.3-mile) Spa track nestled deep in the Ardennes forest. It is the longest on the calendar, as well as being one of the fastest and the most challenging because of its undulating nature and the unpredictable weather conditions.

“We need to work a bit on our speed down the straights,” said Rosberg, who was quickest ahead of Hamilton in the first practice. “The interesting challenge for this weekend is to find the right compromise between being quick over one lap and over a long distance in the race.”

Hamilton completed 26 laps in the afternoon and clocked a best lap of 1 minute, 49.189 seconds. Rosberg stayed out for two laps longer as they made the most of the dry weather.

“The forecast is wet for tomorrow, so it was important to maximize track time as this may be our last dry running before the race,” Hamilton said. “We’ve seen rain so often here in the past and that can really mix things up, particularly when it’s wet in places and dry in others.”

Vettel’s power unit failure was due to an electrical problem in the morning, when he finished nearly two seconds behind Rosberg in 11th.

It has been a miserable season so far for the German driver, with only two podium finishes and no pole positions. He has retired from three races and is down in sixth place overall. Quite a contrast to last year, when his victory in Spa was the first of nine straight wins.

But this campaign has seen him lag behind teammate Daniel Ricciardo, who has won two races since switching from Toro Rosso in the offseason and is third in the standings — although he trails Hamilton by 60 points.

The red flag came up twice in the afternoon session as Venezuelan driver Pastor Maldonado lost control of his Lotus and Mexican driver Esteban Gutierrez stalled his Sauber.

Maldonado crashed hard into the barriers and was taken to the medical center for a checkup, but only as a precautionary measure, his team said.