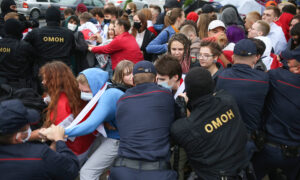 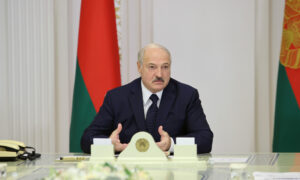 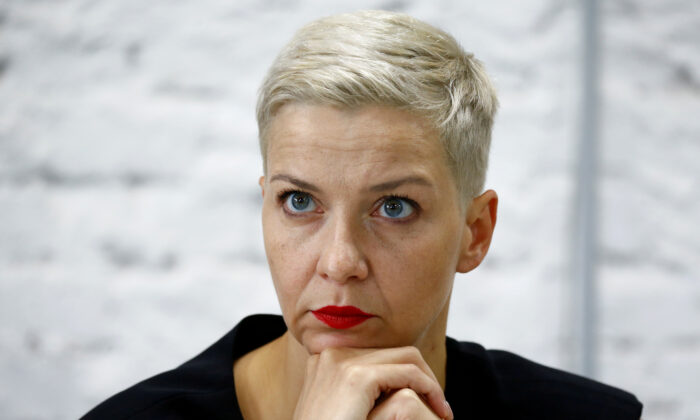 Politician and representative of the Coordination Council for members of the Belarusian opposition Maria Kolesnikova attends a news conference in Minsk on Aug. 24, 2020. (Vasily Fedosenko / Reuters)
Europe

Belarusian Protest Leader Detained After Failed Attempt to Expel Her

KYIV—Prominent opposition leader Maria Kolesnikova was detained by Belarusian authorities on Tuesday, a border official said, after thwarting what a Ukrainian government minister described as an attempt to expel her from Belarus.

The Interfax Ukraine news agency said the activist had deliberately ripped up her passport so that Ukrainian border officials would not be able to let her through.

Deputy Ukrainian Interior Minister Anton Gerashchenko said on Facebook that Kolesnikova, who had been missing for the past 24 hours, had successfully prevented “a forcible expulsion from her native country”.

The fate of Kolesnikova, a key figure in weeks of mass protests over the disputed re-election of Belarusian President Alexander Lukashenko, had been a mystery since supporters said she was snatched in the street by masked men in the capital Minsk on Monday.

“Maria Kolesnikova was not able to be deported from Belarus as this brave woman took steps to prevent herself from being moved across the border. She remained on the territory of the republic of Belarus. Alexander Lukashenko is personally responsible for her life and health,” Gerashchenko said.

Kolesnikova’s whereabouts were unclear. Two other opposition figures who had gone missing around the same time as her, Anton Rodnenkov and Ivan Kravtsov, did however enter Ukraine in the early hours of Tuesday morning, the Ukrainian border service said.

“Kolesnikova has now been detained, I can’t say concretely where she is, but she has been detained,” Anton Bychkovsky, a representative of the Belarusian border service, told Reuters by phone.

“She was detained in connection with the circumstances under which they (the group) left the territory of Belarus,” he said.

With the detention of Kolesnikova and the arrest or flight of other opposition figures, Lukashenko has attempted to cripple the leadership of the protest movement, yet it shows no sign of abating after four weeks of mass demonstrations and strikes.

Sviatlana Tsikhanouskaya, who stood against him in an Aug. 9 presidential election that the opposition says was rigged, said on Tuesday that he was heading an “illegitimate regime”.

“Lukashenko does not have any legitimacy as the president of our country. He does not represent Belarus anymore,” she told a Council of Europe committee from her headquarters in Vilnius, Lithuania, where she fled after the election.

Lukashenko, facing the biggest challenge to his 26-year-old rule, retains the backing of Russian President Vladimir Putin, who has said he will send Russian police to back him if needed.

Lukashenko denies vote-rigging and has accused foreign powers of trying to topple him in a revolution. He has responded with a crackdown which some of those detained say includes torture and beatings.

Diplomats told Reuters on Monday that the European Union is preparing a package of sanctions against 31 Belarusian officials over the election and the subsequent violence.

Kolesnikova, a member of the opposition coordination council, was the last of three female politicians left in Belarus who joined forces before the election to challenge Lukashenko.

In an interview with Reuters last month, she called on the West not to recognize him as president and said his rule was crumbling.