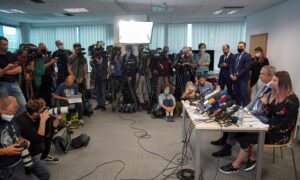 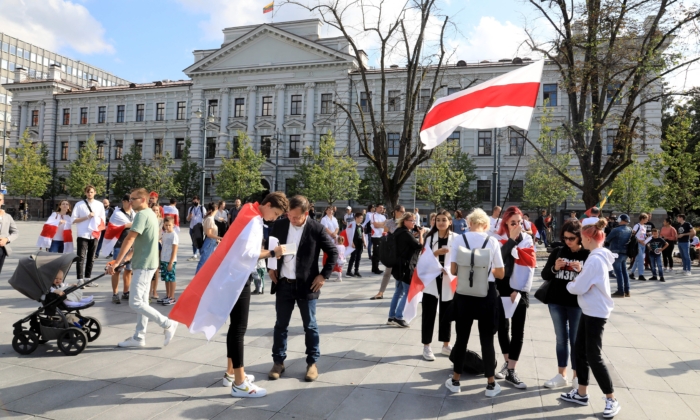 Demonstrators wear Belarusian flags during a rally called "We won't forget, We won't forgive!" in front of the Museum of Occupations and Freedom Fights in Vilnius, Lithuania, on Aug. 9, 2021, one year after a disputed election and protests that erupted thereafter in Belarus.(PETRAS MALUKAS/AFP via Getty Images)
World

Belarus Retaliates Against US Sanctions

The authoritarian regime in Belarus retaliated against U.S. sanctions on Aug. 11 by withdrawing its approval for the appointment of the U.S. ambassador to Belarus and telling Washington to reduce its embassy staff.

The administration of President Joe Biden imposed new sanctions on Belarus on Aug. 9, the one-year anniversary of widespread protests in response to an election the opposition said was rigged. President Alexander Lukashenko ruthlessly squashed the protests with mass arrests and beatings by police.

The U.S. sanctions have targeted 44 people and entities, including the nation’s giant potash producer, the National Olympic Committee, and 15 private companies tied to top regime figures.

“These steps are a further consequence to the Belarusian authorities’ continued flagrant disregard for human rights and Belarus’s failure to comply with its obligations under international human rights law,” Secretary of State Antony Blinken said in an Aug. 9 statement.

The spokesman for the Belarus Foreign Ministry called the U.S. sanctions “blatant and openly hostile” and said that the appointment of Julie Fisher as the U.S. ambassador to Belarus was rescinded.

The spokesman, Analoty Glaz, said the United States is to cut the staff at the U.S. Embassy in Minsk to five diplomats by Sept. 1.

“In view of Washington’s actions to halt cooperation in all spheres and strangle our country economically, we see no reason in the presence of a significant number of diplomats at the U.S. diplomatic mission,” Glaz said in a statement.

While Belarus agreed to Fisher’s appointment in December 2020 as the first U.S. ambassador to Belarus since 2008, the country never issued her an entry visa. Fisher has remained in neighboring Lithuania, where she maintains contacts with Sviatlana Tsikhanouskaya, the main opposition challenger in the Aug. 9, 2020, election, who was forced to leave Belarus under pressure from authorities.

“The United States government, Ambassador Fisher, personnel at our embassy in Minsk will continue to support the democratic aspirations of the people of Belarus,” Price said.

“U.S. diplomats will continue to engage with Belarusians, including leaders of the pro-democracy movement, media professionals, students, and other elements of civil society wherever they are.”