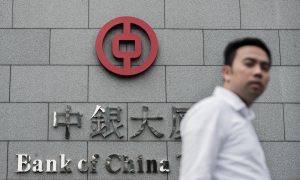 While We Focus on the AIIB, China Is Increasing Its Power in the Western Financial System
0
Share Now
TelegramFacebookTweetEmailTellMeWeReddit
Copy Link 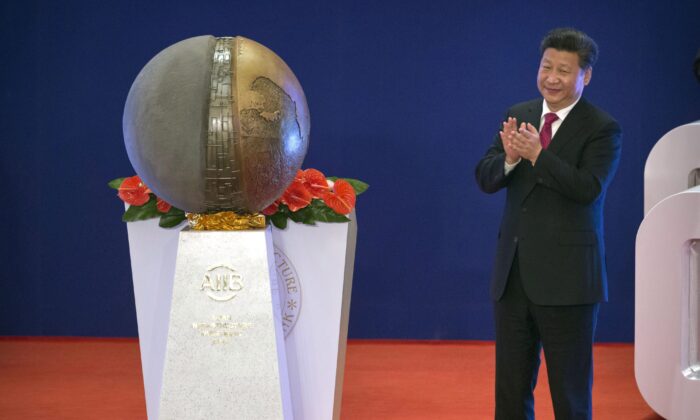 Chinese leader Xi Jinping applauds after unveiling a sculpture during the opening ceremony of the AIIB in Beijing on Jan. 16, 2016. (Mark Schiefelbein/Pool/AP Photo)
Thinking About China

On May 28, in a speech delivered at Joint Base Langley-Eustis in Hampton, Virginia, President Joe Biden made startling remarks that the United States is “in a battle between democracies and autocracies,” and that Xi Jinping “firmly believes that China, before the year ’30, ’35, is going to own America.” Some may think Biden is scaremongering, but the fact is that since Xi proposed to build “a community of shared future,” the Chinese Communist Party (CCP) has been blowing the trumpet for world domination. However, in order to dominate the world, the CCP must first bring down the United States, and in order to do so, it must first shake the international status of the U.S. dollar in the global settlement system. It was for this purpose that the Asian Infrastructure Investment Bank (AIIB) was established.

When the AIIB first started its operation in 2016, the CCP claimed that it was a regional investment bank to promote the interconnection and economic integration of the Asian countries, with a focus on financing infrastructure projects in the region—including loans, equity investments, and guarantees—to boost investment in various sectors such as transportation, energy, telecommunications, agriculture, and urban development.

But in reality, the AIIB has been reaching out to countries across the globe since its creation. According to regime-controlled Chinese information portal Baidu, as of July 2020, the bank had already enticed 103 countries into its member states, spanning five continents. Apparently, the prefix “Asian,” that appears in the bank’s name, or its once self-claimed Asian focus is just a facade to hide the CCP’s global intentions.

The CCP has the following hidden plans for the establishment of the AIIB:

First, the CCP will use the AIIB to issue the Asia Currency Unit (ACU) globally, thereby replacing the U.S. dollar in the international settlement.

On Oct. 29, 2014, the state-run media China Daily published an article entitled “AIIB to Be a ‘Powerful Tool’ to Challenge Hegemony of US Dollar.” It stated: “Although Japan, Korea, Indonesia, and Australia have refused to support the AIIB due to pressure from the Obama administration, the support of most Asian countries reflects that the White House’s efforts to weaken regional integration are extremely limited in the face of the Chinese yuan diplomacy. In short, the introduction of a new mechanism will openly challenge the pillars of the Bretton Woods system and drive the transition to a new governance model centered on financial regionalization. Perhaps at some point, the American era will collapse in the face of the dawn of an Asia centered on the rise of Beijing’s multipolarity.”

On Dec. 16, 2019, the ACU was officially launched in Hong Kong, and expected to become one of the world’s leading applications with the most credibility, influence, and audience in the world, according to Yahoo.

Second, the CCP promotes the globalization of the Chinese yuan through the AIIB.

On Feb. 13, 2017, Sheng Songcheng, director of the Department of Investigation and Statistics of the People’s Bank of China, told the CCP media People’s Daily that with the further facilitation of trade and investment in countries along the Belt & Road Initiative (BRI), the economic and financial cooperation between China and the countries along the route will become closer. The establishment of the AIIB and Silk Road Fund will promote the opening of China’s capital account and the process of internationalizing the Chinese yuan.

Third, the CCP is using the AIIB’s equity and debt rights to tie up member countries in order to isolate the United States internationally.

On March 30, 2015, the International Business Times published an article entitled “AIIB’s ‘Circle of Friends’ Expands to 42, US Increasingly Isolated.” The article stated, “The U.S. is becoming increasingly isolated as more and more U.S. allies apply to join the China-led AIIB.”

According to a report by Yahoo, the CCP uses the BRI to provide strategic loans to small and vulnerable countries, and pursues “debt diplomacy” in 16 countries, including Pakistan and Sri Lanka, in order to obtain strategic resources and expand its political influence in the Asia-Pacific region. Indian scholar Qirani said that Beijing’s BRI and the AIIB are in fact “credit imperialism,” using cheap loans to threaten and tie up partner countries and deprive them of natural assets, stated the report.

For example, in 2017, saddled by its overwhelming loan debt to Beijing, Sri Lanka had to sign a 99-year lease for the use of its Hambantota Port. The agreement has given the CCP an important strategic foothold along commercial and military shipping lanes and has raised alarm in other countries participating in the BRI projects.

Fourth, the AIIB is used to promote the export of China’s excess production capacity.

According to the Yahoo report, through AIIB’s China Import and Export Bank and China Development Bank, the CCP promotes BRI infrastructure projects by rejecting competitive bidding and handing lucrative contracts directly to Chinese state-owned enterprises, which have little incentive to take into account the concerns of local people. A study by the Center for Strategic and International Studies, a Washington think tank, shows that 89 percent of all Beijing-funded infrastructure projects are undertaken by Chinese companies.

As reported by Apple Daily on Feb. 18, 2021, the Finance Committee of the House of Commons of Canada released a report recommending that Canada withdraw from investing in the CCP-led AIIB. Wayne Easter, the committee chairman and a senior member of the ruling Liberal Party, said that the Canadian government needs to recognize the serious threat that the CCP poses to Western democracies, as well as its growing influence in Canada, which is actively penetrating all walks of life in Canada.

In 2017, the Trudeau government contributed $995 million to join the AIIB, a move that the Conservative Party has always opposed. In addition, Global Affairs Canada has warned that Beijing’s motive for establishing the bank is to use its economic clout to export its authoritarian governance model around the world, according to the report.

Gu Feng
Follow
Gu Feng is a former media veteran from mainland China who spent many years reporting on the country’s political, economic, and social issues. He is now living in the United States.
TOP NEWS