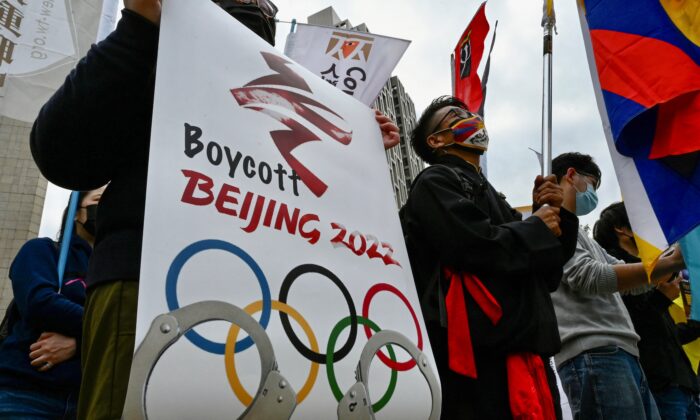 Beijing’s Choreography of the Winter Olympics Might Not Work

China has been carefully planning the XXIV Olympic Winter Games to showcase Chinese leadership on the world scene. Has the Chinese Communist Party (CCP) accounted for everything?

CCP leader Xi Jinping and his underlings have invested a great deal of personal and national prestige in preparing what they hope will be a carefully choreographed Olympic Games on their home turf next month. Outwardly, it might appear that all systems are “go” for the Chinese communists (Chicoms) in their efforts to propagandize China’s ascendancy to world leadership, with the games being a perfect showcase for Xi and the CCP. After all, Beijing will become the first city in the world to have hosted both a Summer and Winter Olympics.

It might seem the stars are aligning “with Chinese characteristics,” in terms of minimizing embarrassment and propagandizing about China’s readiness to serve as a good host during the games. On New Year’s Eve, Xi declared that China was “ready to present a great Beijing Winter Olympic and Paralympic Games to the world.”

He could confidently make that statement due to agitprop successes in recent months, as seen in the following examples:

• State-run Chinese media conveyed the support of the International Olympic Committee and various national Olympic committees for the China-hosted games.
• Siddhartha Chatterjee, the resident coordinator of the United Nations in China, chimed in with his gushing support, “[T]he UN family in China fully supports and will play its part in ensuring the success of the Beijing Winter Olympics and Paralympics,” China Daily reported. The United Nations is on board (as if there was ever any doubt)!
• San Francisco native Eileen Gu is a major contender in three Olympic freestyle skiing events: halfpipe, slopestyle, and big air. She switched her national affiliation and will compete for China in the Winter Games. A major propaganda victory for the CCP!
• After a few weeks of sensational news, the CCP was able to squelch public discussion of Chinese tennis star Peng Shuai’s claims of sexual harassment against former Vice Premier Zhang Gaoli. Embarrassing scandal nipped in the bud (by a little behind-the-scenes pressure, no doubt)!
• A blitz of state-run Chinese media agitprop touting the oxymoron that China’s “whole-process people’s democracy” obfuscated its absence at the U.S.-led Summit for Democracy in early December.
• International calls for an Olympic boycott in response to the CCP’s ongoing Uyghur genocide were thwarted by Chinese pressure, with a handful of meaningless diplomatic boycotts being the end result. A major worry and embarrassment avoided!
• According to China Daily, massive medical support preparations are in place: “Li Ang, deputy director and spokesman of the Beijing Municipal Health Commission, said at a news conference in Beijing that the city … ha[s] set up 88 medical stations for on-site medical treatment and triage of the sick and injured and have 1,140 medical staff members assigned from 17 designated hospitals and two emergency agencies.”
• And lastly, the Chicoms have convinced many foreigners that their policy of “zero COVID on a societal level” has actually been working. Whatever does that phrase mean? It means that the world must believe the COVID-19 statistics provided by the CCP, regardless of the complete illogic of the numbers. For example, Worldometers continues to report that there have been no COVID-related deaths in China since the 4,636 that were reported as of May 2020. Absurd! Moreover, many governments have adopted Chinese measures of mandatory masks, forced vaccinations, vaccine passports, and social distancing without success.

However, the propaganda stars’ alignment “with Chinese characteristics” may be obfuscating some real problems for Xi and his Olympic planners. Could the rising number of Omicron infections in China signal major difficulties for the CCP in the run-up to the Olympics?

In keeping with the CCP’s “zero-COVID” plan, China Daily crowed last month that “over 1.2 billion [have been] fully vaccinated against COVID-19” on the mainland.

Just how effective are those SinoPharm and SinoVac vaccines? Apparently not so much against the Omicron variant.

But that may not be the worst virus threat that the 3,000 Olympic athletes might face during the games. Dr. Robert Malone, who developed mRNA technology, has warned “about an ‘Ebola-like hemorrhagic fever’ super virus coming out of Communist China that he believes could be caused by mutations arising from mass vaccination,” National File reported on Jan. 10. Such an outbreak would shut down the Winter Games in short order.

Besides the virus threats, there are other recent cracks in the “happy panda face” façade that has been erected by the CCP. The following are a few examples:

• The obscure Global Imams Council banned Muslims from attending the Games.
• Zumretay Arkin from the World Uyghur Congress, Tibetan-Canadian activist Chemi Lhamo, and Frances Hui from We The Hongkongers have called on athletes not to support the Beijing Winter Olympics, which they described as “The Genocide Games.”
• U.S. pairs figure skater Timothy LeDuc publicly called out CCP repression of Uyghurs and described it as “the largest number of people held in internment and labor camps since World War II,” according to a report by USA Today.
• On Jan. 9, U.S. snowboarding Olympian Shaun White posed with the Tibetan flag with activists from Students for a Free Tibet.

Are Xi and his cronies getting a little nervous? Would they bully their way through with the Olympics even in the middle of a significant virus outbreak? What might other Olympic athletes do in the way of protesting CCP treatment of Uyghurs, Tibetans, Falun Gong, and other minority groups? How would the CCP handle a massive protest by Olympic athletes being broadcast in real-time around the world? How would they respond to a flurry of Free Tibet and/or Free East Turkestan flags during the opening ceremonies?

Much of the recent international awareness and pushback against Chinese belligerence, aggression, persecution, and genocide can be attributed to Donald Trump’s “America First” policy in which he became the first U.S. president to reverse the nearly five-decade-long “Kissinger Kowtow” policy of China engagement.

The “Kissinger Kowtow” policy directly resulted in the modernization of China, facilitated by the implementation of “free trade” and the offshoring of U.S. manufacturing facilities to mainland China. One end result was the creation of the “Rust Belt” in the Upper Midwest of the United States.

To the chagrin of the CCP, Trump also reinvigorated U.S. relationships with countries along China’s periphery that had been under pressure from Beijing, with several breaking new ground in cooperative agreements amongst themselves.

In addition to the implementation of tariffs against various categories of Chinese goods and the negotiation of binding trade deals aimed at curtailing Chinese mercantilist practices, Trump’s labeling of SARS-CoV-2 as the “China virus” served as a lightning rod to focus international attention on Beijing’s blame-shifting and unwillingness to provide medical data about the virus and its origins.

While the CCP virus may have been a catalyst that was capitalized on by the Democrat Party to defeat Trump during the presidential election, there is no question that Xi and his underlings are delighted that Joe Biden is presently in the Oval Office instead of Trump.

But is there a boomerang effect about to descend on Beijing that will thoroughly disrupt the CCP’s plans for the Winter Olympics? Could the Olympics be shaping up as another surprising Trumpenfreude event?

Schadenfreude is defined as “pleasure derived by someone from another person’s misfortune.” Trumpenfreude is a derivative and relates to people who insult or start feuds with Trump but end up worse for the ordeal. Retired journalist and blogger Don Surber has been collecting instances of Trumpenfreude since early 2017. Surber has identified 118 discrete Trumpenfreude events plus dozens of updates, as listed here.

Xi Jinping has declared that China is ready for the Olympics. The state-run media have been propagandizing about the ongoing preparations for months, including telegraphing lockdowns of Chinese cities aimed at containing Omicron. Olympic athletes are well aware of the Uyghur and Tibetan genocides, and some have public protested. Will a major virus outbreak in Beijing derail the Olympics? There is a distinct possibility of a giant Trumpenfreude in the context of the Winter Olympic Games being visited on Xi and the CCP in just a few weeks’ time.