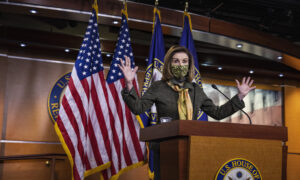 Pelosi: Speaking Up for Human Rights in China Is About 'Honoring Our Values'
0
Share Now
TelegramFacebookTweetEmailTellMeWeReddit
Copy Link 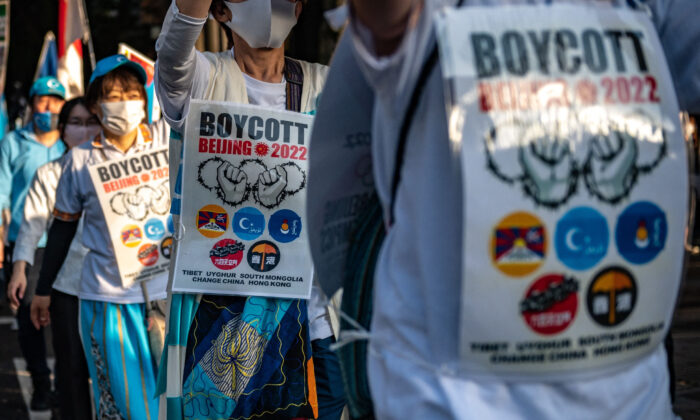 Activists take part in a protest calling for a boycott of the Beijing 2022 Olympic Games over China's human rights record, in Tokyo on Oct. 2, 2021. (Philip Fong/AFP via Getty Images)
China Human Rights

Beijing Winter Olympics are set to start in four months, yet both the Chinese regime and the International Olympic Committee (IOC) remain silent on accusations of human rights violations in the host nation.

Unlike the 2008 Olympics—when China was allowed to host the event under vague promises of improving its human rights record—there have been no human rights conversations nor pledges of betterment by the Chinese communist regime. Some argued, back over a decade ago, that granting Beijing the 2008 Olympics would have helped press the regime to improve upon its rights record.

But the IOC decided to let Beijing host the Winter Olympics, that open on Feb. 4, undeterred by opposition from rights advocates.

Thomas Bach, IOC president, has continuously evaded questions regarding the morality of holding the Olympics in China, given ongoing reports of the Chinese Communist Party’s (CCP) systematic human rights violations. He also declined to address or condemn the treatment of Uyghurs and other minorities in China.

“The big difference between the two Beijing Games is that in 2008 Beijing tried to please the world,” said Xu Guoqi, a historian at the University of Hong Kong, in an email to The Associated Press. “In 2022, it does not really care about what the rest of the world thinks about it.”

When China landed the Olympics in 2008—after it had been denied the opportunity in 2000, partly due to its rights abuse record—some IOC members opposed it on the basis that it would give tacit approval to the regime’s conduct.

But according to Uyghur activist Zumretay Arkin, nowadays the IOC “couldn’t care less” and appears “unmoved” when faced with abhorrent testimonies from Uyghur survivors that escaped Chinese re-education camps, according to an April 8 blog post. Arkin claims the IOC “insists the Olympics are a ‘force for good’ and that sport can be separated from politics, even when the host government is charged with genocide.”

Many rights experts and advocates have also said that the human rights situation deteriorated in China after 2008, questioning why the 2022 Winter Olympics should be different.

HRW said that, since 2008, it “documented the government’s crackdown on peaceful activists, lawyers, and human rights defenders, mass arbitrary detention of one million Turkic Muslims” in Xinjiang, “the deployment of Orwellian surveillance technology with a view towards engineering a dissent-free society,” as well as the “drastic” curtailment of civil liberties in Hong Kong.

As further stated by a coalition of 200 rights advocates, the Chinese regime “repeatedly backtracked on the human rights pledges it made to secure the right to host the [2008] Games and there was no accountability by the IOC and the international community. Instead, China was given a free pass to wantonly violate human rights and fundamental freedoms.”

This came in the form of an open letter addressed to TV broadcasters, pleading with them to cancel their coverage of the 2022 Winter Olympics.

Reggie Littlejohn, the founder of Women’s Rights Without Frontiers and part of the Genocide Games coalition, said in an interview with EpochTV’s “American Thought Leaders” that the CCP broke all promises it made in 2008.

“If they committed genocide or are continuing to commit genocide against the Uyghurs after the 2008 Olympics, what are they going to do after 2022? Are they going to invade Taiwan?” Littlejohn said.