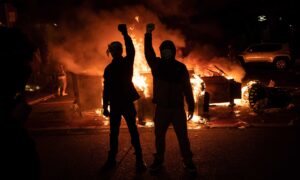 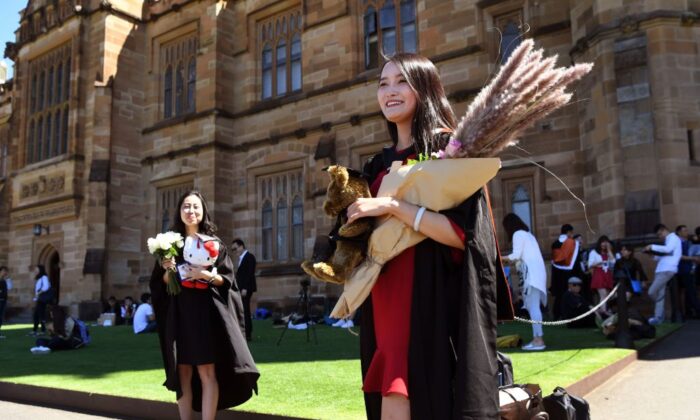 Student from China poses for graduation photos at Sydney University in Australia, on Oct. 12, 2017. (William West/AFP via Getty Images)
Australia

Just hours after attending a rally in support of Hong Kong’s freedoms, a student from mainland China studying in Australia received a message from a mainland classmate at 2 a.m. saying: “I’m watching you.”

Zhang Xiuyang, a pseudonym used for safety, said she had known the classmate for a long time, was aware of their differing opinions, and had previously told him she did not want to discuss Hong Kong with him.

In their latest report, ‘They Don’t Understand the Fear We Have,’ Human Rights Watch (HRW) revealed the failure of Australian universities to protect the academic freedom of students and academics who criticise the Chinese Communist Party (CCP).

“Personally, I felt really scared. I went to go see the uni [university] psychologist because I was so stressed. I blocked him [the classmate] on Facebook. I was in a course with 98 percent Mainland Chinese students. Students were bad-mouthing me. That I was not loyal to the country,” Zhang said.

Zhang said she would self-censor herself on Australian campuses whenever Chinese students were in the class due to fears of being reported.

“I want to be in a class with no other Chinese students so I can say what I think,” she said. “If you are sitting with local students, people are open to sharing their ideas. It’s easy to learn.”

Zhang is among the 24 pro-democracy students from mainland China and Hong Kong, and 22 academics–who either come from China or specialise in China studies—who shared their experiences pertaining to Beijing’s overseas surveillance operations in Australia with Human Rights Watch.

Sophie McNeill, an Australian researcher at HRW and author of the report, said university administrators were failing in their duty of care to protect the rights of Chinese students.

“Australian universities rely on the fees international students bring while turning a blind eye to concerns about harassment and surveillance by the Chinese government and its proxies,” McNeill said.

Every pro-democracy student interviewed expressed fears that their actions in Australia could result in the CCP punishing their families at home.

“This is the reality, I come to Australia, and still I’m not free,” said another mainland student, Lei Chen, also a pseudonym.

Nearly all the academics interviewed said the ways to discuss China had become a significant issue in their careers, with over half admitting to frequent self-censorship because they felt their university did not “have their back.”

The academics also reported that they had fears about Chinese students recording and reporting on them, fears for the safety of Chinese colleagues, and for those with family back in China.

An academic, dubbed “S,” said she noticed that students had become more nationalistic and reluctant to write anything even slightly critical of China since Chinese leader Xi Jinping came to power.

“I just find that students were very reluctant to write essays that are critical about China, even just slightly critical,” this academic said. “And it’s very interesting that before 2010 they were much more open.”

Another academic called “D,” who previously spent many years in China said they needed to learn to accept that one price for speaking freely meant losing entry to China.

“I censor less now than I did before. And that is because I’ve given up on having access to China, and if you make your peace with that, you’re in a position to speak out. I feel much freer in speaking,” “D” said.

The report notes that by 2017, international students accounted for around 28 percent of the student body in Australian universities. In 2019, universities collected more than $17 billion (US$12.8 billion) in fees from these students.

Around 40 percent of all onshore international students are from China. This means approximately 1 in 10 of all students attending Australian universities in 2018 came from China.

Associate Professor at the University of Sydney Salvatore Babones found in his research that the substantial number of Chinese students was unique to Australia.

This increasing over-reliance on the overseas student market became particularly obvious when Australian international borders closed in March 2020, due to the CCP virus. Universities Australia (UA), the peak body for the sector, said the industry would lose an estimated $16 billion in revenue.

UA said they condemned all forms of coercion on campus. However, it was not a problem that universities could address alone.

“Every university leader will read this report with concern,” UA CEO Catriona Jackson said. “The University Foreign Interference Taskforce (UFIT) is actively working on measures designed to counter interference in the university sector.”

The Group of Eight (Go8), which represents Australia’s leading research-intensive universities, said the issues raised by the HRW report were concerning.

“However, it must be noted that this is not characteristic of the typical student experience at Australian universities,” Go8 Deputy CEO Matthew Brown said. “Nor is it solely the responsibility of universities to address these issues—it is a national concern.”

“In this context, the primary responsibility for monitoring the actions of foreign governments on Australian soil lies with the Australian Government and its agencies, not universities.”

Tudge has pushed Australian universities to adopt the French Model Code to help protect academic freedoms on campuses. He threatened the use of legislation if universities did not adopt the code by the end of the year.