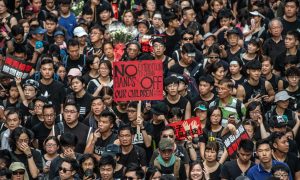 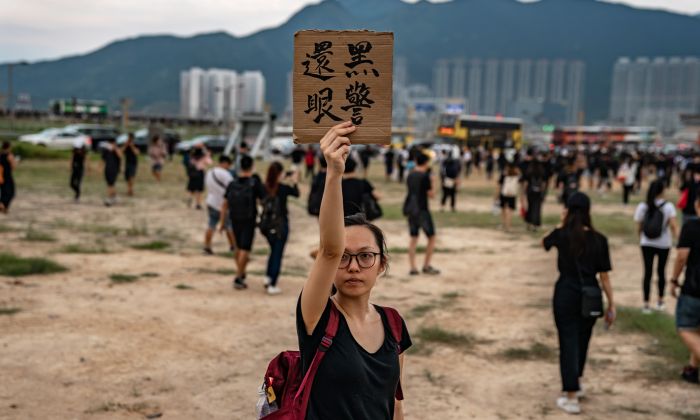 A protester holds up a placard which translates as 'policeman pay the eye back' outside the Hong Kong International Airport as protesters retreat during a demonstration in Hong Kong on Aug. 12, 2019. (Anthony Kwan/Getty Images)
HK Current Affairs

A female medic was shot in the eye with a pellet round during a standoff between Hong Kong demonstrators and police on Aug. 11.

Soon after, Chinese state media began spreading false information about the incident to stoke mainland Chinese citizens’ antagonism toward the protesters. Meanwhile, Hong Kong police tacitly confirmed that they had impersonated demonstrators in order to blend in and make sudden arrests.

China’s state-run broadcaster CCTV posted on its official account on Weibo, a Twitter-like social media platform, that a female protester was injured by a fellow demonstrator. Eyewitnesses and Hong Kong media have said that the police shot the medic.

In an Aug. 12 post, CCTV called the supposed “fellow protester” a “pig,” along with a photo showing five Hongkongers dressed in black standing together counting wads of cash, and another photo showing two men practicing to shoot a steel-ball gun. Most protesters in Hong Kong who have been opposing a controversial extradition bill wear black clothing.

The social media post insinuated that protesters were being paid to demonstrate, and that the female medic was injured by a protester’s steel-ball gun.

Kwong Chun-yu, a Hong Kong lawmaker, posted on Facebook that the female protester was severely injured on the evening of Aug. 11 and had emergency surgery.

The Facebook page of the University of Hong Kong’s student union posted a photo that was taken at the scene, explaining that a young protester was detained by police on Aug. 11. While his hands were tied by police, another police officer opened the protester’s backpack, and placed a bamboo stick inside. Similar footage has also been circulating on the Hong Kong internet.

The city’s police have also apparently dressed up as protesters.

On the evening of Aug. 11, local media captured scenes of black-clad men assisting police in detaining protesters who gathered at Causeway Bay. When reporters at the scene asked who they were, they answered: “The public relations branch of the police department will answer you.”

At a press conference on Aug. 12, Tang Ping-keung, deputy director of Hong Kong police, said: “Police officers have pretended to be different types of people [during the protests].”

When pressed by journalists whether officers had impersonated protesters, Tang answered: “You should know one thing: it’s not easy to detain the core extremist, violent protesters,” implying that police had done so in order to arrest violent demonstrators.

Chinese state-controlled media escalated their rhetoric on Aug. 12, defending the actions of police over the weekend and vilifying the protesters.

State-run media Xinhua, in a commentary, labeled the protesters as “rioters” and implored locals to stand against them.

“The rioters once again surrounded the police station,” the article read. “All those who have genuine love for Hong Kong should not continue to endure this in silence, but should stand up to stop the spread of this malignant tumor.”

The article made no reference to police actions on the night of Aug. 11, including firing tear gas inside a subway station and shooting rubber bullets and pepper pellets at protesters at close range.

A commentary by the Chinese Communist Party’s mouthpiece The People’s Daily encouraged Hongkongers to focus on developing the economy.

The piece called protesters “radical” and “violent,” and accused them of sabotaging what Hong Kong has accomplished over many generations. It likewise omitted any reference to police actions in dispersing the protesters.

Amnesty International–Hong Kong on Aug. 12 warned that the “heavy-handed policing approach will only increase tension and provoke hostility, leading to the overall escalation of the situation.”

“Hong Kong police have once again used tear gas and rubber bullets in a way that has fallen short of international standards. Firing at retreating protesters in confined areas, where they had little time to leave, goes against the purported objective of dispersing a crowd,” an Amnesty official said in a statement.

Tang Jingyuan, a U.S.-based China commentator, told The Epoch Times on Aug. 12 that Xinhua’s hawkish commentary was an attempt to warn Hongkongers that the Chinese regime isn’t afraid to deploy forces to put an end to the civil unrest.