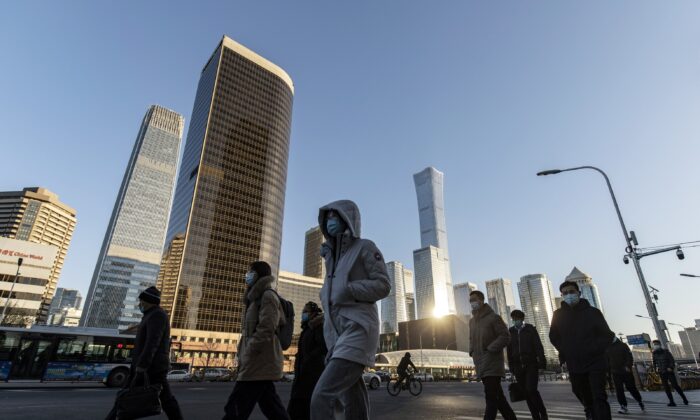 Pedestrians cross a road in front of buildings in the central business district in Beijing, China, on Nov. 23, 2021. China's marked economic slowdown in the year's second half is testing the central bank's policy mettle and dividing economists over whether more aggressive action is needed to avoid a deeper downturn. (Qilai Shen/Bloomberg via Getty Images)
China Business & Economy

Beijing Shows a Hint of Desperation

Milton Ezrati
Milton Ezrati is a contributing editor at The National Interest, an affiliate of the Center for the Study of Human Capital at the University at Buffalo (SUNY), and chief economist for Vested, a New York-based communications firm. Before joining Vested, he served as chief market strategist and economist for Lord, Abbett & Co. He also writes frequently for City Journal and blogs regularly for Forbes. His latest book is "Thirty Tomorrows: The Next Three Decades of Globalization, Demographics, and How We Will Live."
View profile
Follow
biggersmaller
Print

Beijing is beginning to look desperate. Months ago, it reduced its real growth target of 2022 to only 5.5 percent. Severe restrictions to deal with COVID-19 make even that reduced number look unattainable.

Beijing also needs to overcome the natural tendency for any economy to see slower growth as it achieves higher levels of development. China’s leadership understandably worries over the growth in unemployment, to over 6 percent of the workforce recently and almost 20 percent of the youth population. Now policymakers seem to have pulled out just about all the stops to get things going, and it is not apparent that will be enough.

Premier Li Keqiang recently laid out the stimulus measures favored by China’s cabinet, called the State Council. Titled “Policy Measures Package to Stabilize the Economy,” the plan is massive, totaling some 800 billion yuan ($120 billion) and consisting of 33 separate initiatives, though exactly how many depends on how one counts.

The program has too many bits to itemize all here. A summary should be sufficient.

Some 14 of the measures aim to offset the ill effects of the anti-COVID lockdowns and quarantines. In these, Beijing has concentrated on what it refers to as micro-, small-, and medium-sized businesses (MSMEs).

Policy aid includes relief on taxes and fees, measures to defer social security premiums and payments to the housing provident fund, and some principal and interest payments on liabilities owed to state-run banks. This part of the program extends this relief to some larger businesses in select areas, including manufacturing, technology services, energy, transportation, and ecological protection. The State Council has also offered MSMEs some preferences on government contracting and loan support, especially in transportation, catering, accommodation, and tourism.

The rest of the program, the bulk of it, aims at infrastructure, China’s longstanding go-to area when seeking economic growth. Here, the emphasis is on water conservancy, flood control, and refurbishing urban pipelines. The State Council also emphasizes energy. This part of the plan includes wind, solar, and hydroelectric, but it also looks to increase coal production.

The State Council goes out of its way to acknowledge the long-term environmental concerns of coal. Still, it emphasizes an immediate need to provide energy, understandable after the devastating effect of 2021’s electricity shortfalls.

Logistics—transportation, warehousing, and urban hubs—also receive emphasis, as do auto and aviation production, largely by lifting local and national regulations that might interfere with sales.

Though, in many respects, this latest stimulus effort looks very much like past such efforts, the emphasis on MSMEs is novel. Past such efforts have largely ignored smaller businesses, concentrating almost exclusively on grand projects—roads, bridges, ports, rail links, and the like—that naturally drew the government support to larger firms, especially state-owned firms.

The seeming lack of concern for so-called MSMEs in the past had less to do with government hostility than that smaller firms have little presence in the areas of government interest. Their inclusion this time has less to do with a change in Beijing’s economic emphasis than with a pressing need to offer relief from the ravages of anti-COVID strictures. Even with Beijing’s acknowledgment of this need, little else in the State Council’s program speaks to any fundamental shift in economic priorities.

One seemingly small aspect of the package is particularly telling. The State Council designates foreign investment as critical to China’s growth.

Beijing’s latest plan makes clear that the government prefers such investment monies to flow to less developed areas of the country, such as the central, western, and northeastern provinces. It also looks for foreign investment in advanced manufacturing, robots, technological innovation, and tech research and development.

Just about every country in the world makes invitations for foreign investment to its underdeveloped regions, usually to relieve poverty and unemployment. But China’s emphasis on technological transfers from abroad announces, albeit obliquely, that despite strides in homegrown tech, China still needs help from the developed world—or at least Beijing seems to think it does.

The State Council’s “Policy Measures Package to Stabilize the Economy” clearly says two things. First, Beijing is now desperate to achieve even its reduced 5.5 percent real growth target for 2022. Second, China’s leadership plans to achieve that growth using largely the same policies it has relied on in the past—infrastructure projects and reliance on foreign technology transfers.

Many thoughtful observers believe that even with this package, China will fail to make its target. The International Monetary Fund looks for 2022 real growth to come in at only 4.5 percent. Economists at Japan’s huge broker-dealer, Nomura, are even more pessimistic. They look for real growth of only 3.9 percent.

Chances are that however reality comes out, Beijing will announce success, even if it requires some legerdemain with the statistics.