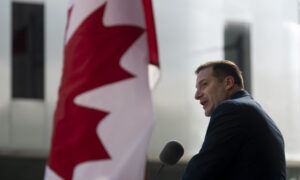 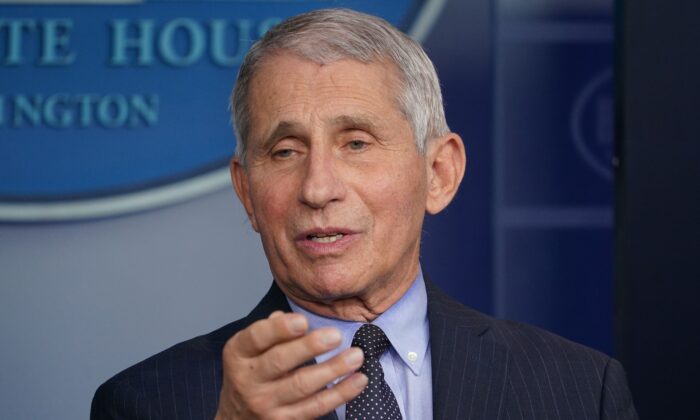 Director of the National Institute of Allergy and Infectious Diseases Anthony Fauci speaks during the daily briefing in the Brady Briefing Room of the White House on Jan. 21, 2021. (Mandel Ngan/AFP via Getty Images)
Chinese Regime

As a top U.S. infectious disease expert and chief medical adviser to President Joe Biden, Fauci appeared with Chinese epidemiologist Zhong Nanshan in early March during an online forum hosted by the University of Edinburgh—their first public event together over the issue.

In a nearly hour-long video panel discussion themed around “the future of health,” the two repeatedly highlighted the need for collaboration, a message that Chinese authorities have frequently adopted to fend off criticism of its initial coverup of the outbreak.

Zhong, whom one Chinese official has described as “China’s Fauci,” earned international prominence for helping the regime manage the SARS outbreak that originated from the country in late 2002. Zhong has championed state narratives about its handling of the COVID-19 pandemic, including by stating that the regime was “completely transparent” compared to SARS, and lending credibility to Beijing’s claims that the virus could be spread via imported foods—a theory dismissed by Western scientists.

Zhong, during the event, credited the regime’s heavy-handed lockdown policies for China having “the least” number of COVID-19 infections and deaths compared to most other countries. Critics and leaked internal documents, however, have disputed the regime’s official COVID-19 figures as being vast undercounts of the real number. Snap lockdowns across the country, meanwhile, have led to complaints of starvation and harsh treatment at quarantine centers.

The virus, Zhong said, is “a common enemy of the human being.”

Zhong praised Biden for rejoining the World Health Organization. The Trump administration withdrew from the body last year over its role in enabling Beijing’s coverup of the outbreak by repeating its talking points downplaying the severity of the virus in the early stages. Zhong added that the “politicization” of public health measures was his “greatest fear.”

Meanwhile, Fauci described vaccines from China as “highly efficacious,” and cast “solidarity and cooperation” as a “moral obligation” to bring the virus under control.

Later in the event, Fauci said, “I would underscore everything that Professor Zhong said.”

“We are all in it together, every single country,” Fauci said during the conversation. “To emphasize something that both of us said, If we do not completely suppress this, we will continue to be challenged by variants, which have a way of coming back to bite us.”

At no time during the panel discussion did the two mention the Chinese regime’s efforts to cover up the outbreak and its ongoing efforts to deflect blame and fend off genuine independent investigations into the virus origins.

“Dr. Fauci is bought and paid for by the Chinese Communist Party,” Peter Navarro, former director of the National Trade Council under the Trump administration, told The Epoch Times in an email.

Chinese officials and state media quickly seized upon Fauci’s remarks as an endorsement of Beijing’s narratives.

Chinese headlines stressing cooperation also proliferated on the internet and were reposted on a number of government sites, including the Chinese embassy in Spain.

State-controlled media Xinhua carried a commentary on March 4 touting what it saw as “an encouraging sign for bilateral cooperation.”

“Scientists and medical workers of the two countries have been working together since the beginning of the pandemic. However, their cooperation was disrupted by Washington’s politically-motivated acts,” the article stated.

“The good news is that the United States is now taking a more rational attitude and adopting more scientific measures, which are welcomed by the international community.”

The newspaper ran an article the next day saying that such calls have “struck a chord with international scholars.”

The Central Commission for Discipline Inspection, China’s top disciplinary body, took the opportunity to extol the Party for enforcing “most rigorous virus control procedures.” The exchange “demonstrated yet again China’s firm resolve to participate in the global pandemic fight” and its sense of responsibility, it said.