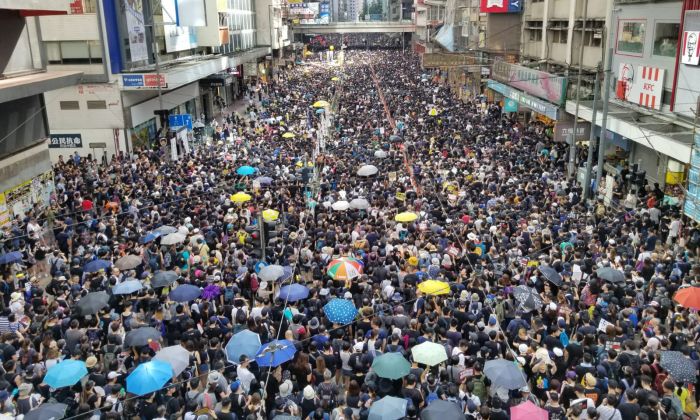 On July 21, 430,000 Hongkongers flooded the streets to call for an independent investigation into police use of force against protesters in recent demonstrations against a controversial extradition bill. China’s state-run media did not report on the Sunday march, but instead covered a pro-police rally in Hong Kong held on Saturday. Chinese state-run media also published statements and editorials strongly admonishing Hong Kong protesters.

This weekend, Hongkongers continued to show up in large numbers to protest a controversial extradition bill, which would allow any country, including mainland China, to seek extradition of criminal suspects from Hong Kong.

The now-suspended bill has drawn widespread opposition due to many citizens’ concerns that city authorities could be pressured to transfer individuals to face trial under China’s opaque legal system.

Beijing has prohibited Chinese media from reporting on the events in Hong Kong, while state media has spun in its own narrative in order to condemn the protests.

In the first act to directly rebuke Beijing’s rule, protesters defaced a crest of the Chinese Communist Party with black paint, while others threw eggs at the building’s entrance sign. Some spray-painted graffiti on the building walls.

March organizer Civil Human Rights Front (CHRF) had originally planned for the march to end at the Court of Final Appeal in the Central district. But police rejected the proposal, citing security concerns.

Thousands marched past the police-mandated endpoint anyway, resulting in brief standoffs with the police.

At around 7 p.m., protesters who continued marching westward arrived at the Hong Kong Liaison Office, which is Beijing’s representative office. There, they defaced the building.

Protesters also read aloud a “manifesto” in front of the liaison office, reiterating their demands, including a full withdrawal of the bill; all arrested protesters to be released without prosecution; and universal suffrage in electing the city’s officials.

Soon after, Chinese state-run media Xinhua published a statement from an official at the liaison office, who criticized the protesters for “seriously challenging the authority of the central government.” It further requested that the Hong Kong government and police “severely punish the illegal violence.”

The report did not mention the purpose of the march, nor the reason why protesters expressed their discontent with Beijing.

The statement said that the protesters were challenging the “one country, two systems” concept.

This was a policy the Chinese regime adopted for Hong Kong and Macau after both cities were returned to Chinese sovereignty after decades as European colonies. The Chinese regime had promised that the two regions would preserve their own system of government, economic and financial independence, legal system, and external trade relations. However, many in Hong Kong view the extradition bill as the latest indication of Beijing’s encroachment in local affairs.

People’s Daily, the Chinese Communist Party’s mouthpiece, did however report about a pro-police rally organized by pro-Beijing groups on July 20, which said more than 300,000 had attended.

The previous day, People’s Daily published an editorial in which it painted the Hong Kong protesters as extremists, noting that the protests have hurt Hong Kong’s economy.

Tang Jingyuan, a U.S.-based political commentator, told The Epoch Times that through the editorial, Beijing was seeking to incite divisions within Hong Kong society.

“Listing economic losses because of the protests, Beijing is encouraging Hongkongers to fight with the protesters. When two groups of Hongkongers fight with each other, the Chinese regime will have a good excuse to suppress the people and control Hong Kong tightly,” Tang said.

“By praising their performance, Beijing wants people to know that Lam can’t resign and that Hong Kong police can use more force in the future,” Tang said.