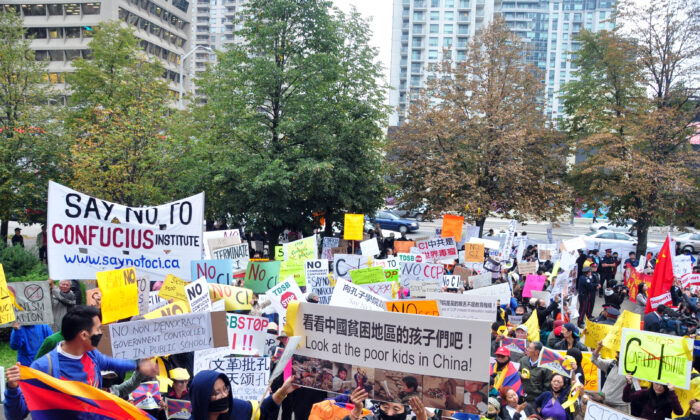 Opponents of the Confucius Institutes rally in front of the Toronto District School Board on Oct 1, 2014. (Zhou Xing/Epoch Times)
International Relations

Around the world, the Chinese regime has partnered with universities and academic institutions to install language centers known as Confucius Institutes (CIs). Drawing upon the name of China’s most famous philosopher, Beijing has promoted these centers as an educational gateway to the country’s language, culture, and history.

But these centers are not as benign as they sound, warns a recently released French military think tank report.

Rather, they serve as vehicles through which the Chinese Communist Party (CCP) can spread its propaganda and censorship to foreign students and institutions, it said, jeopardizing academic freedom and integrity.

The regime has offered universities generous financial packages in exchange for hosting CIs, a September report by the French Military School Strategic Research Institute said. But once they’re set up, the institutes foster self-censorship by host universities, while promoting CCP narratives to foreign students.

Amid rising criticism from Western officials, researchers, and the broader public, many universities around the world have closed their CIs in recent years.

But in response, the CCP has launched a rebranding campaign designed to obscure the institute’s connection to Beijing, the report said. In some instances, schools are adopting new Chinese learning programs run under a different name that uses the same textbooks, courses, staff, and even funding from Beijing.

The French military think tank said Beijing began its rebranding in July 2020. Previously, the regime coordinated and established CIs through an organization called Hanban, but this was renamed to the Center for Language Education and Cooperation (CLEC). Beijing also created a non-governmental organization called the “Chinese International Education Foundation” to control local CIs.

State-run media outlet Global Times said at the time that the move was to “disperse the Western misinterpretation that the organization served as China’s ideological marketing machine.” CLEC is a government agency under the Chinese Ministry of Education, which is overseen by the Central Propaganda Department of the CCP.

Rachelle Peterson, a researcher with the National Association of Scholars who focuses on studying CIs, has explained that while many universities have dropped these centers, the change may have been cosmetic. Peterson told Fox News in March that some colleges that have closed the institutes have simply ended up “replacing them with other organizations that retain a lot of Confucius Institutes’ programs.”

One example is San Diego State University (SDSU). Its CI was officially closed in the summer of 2019, with the university citing a new federal regulation that “any institution receiving Department of Defense funds must remove their Confucius Institutes.”

However, in August of the same year, SDSU announced a new Chinese Culture Center, which is located in the same building as the closed CI. The former director of the CI “will help lead the new Chinese Cultural Center,” it said. Furthermore, the Chinese teaching materials previously donated by Hanban would remain at SDSU.

SDCI website’s “About page” uses Hanban’s new name, saying that it was “established in collaboration with the Center for Language Education and Cooperation. … Through an academic partnership with Xiamen University, SDCI aims to strengthen educational and cultural cooperation … in the greater San Diego region and Baja California as a whole.”

The page also says that “SDCI focuses especially on K-12 student education and teacher training,” referring to the dozen or so “Confucius Classrooms” situated in K-12 schools in the greater San Diego area established by the CI when it was part of SDSU.

There are other elements to the rebranding campaign. An August report titled China’s Global Supply Chain (pdf), published by the American Security Institute, said CIs are also rebranding themselves as “Asia Society Chinese Language Partner Network.” The change came sometime in September 2020, launched in partnership with the New York-based non-profit Asia Society, the report said.

Over the past two decades, hundreds of universities around the world have hosted CIs, established with funding from the Chinese regime.

Beijing’s success in signing on foreign universities is due to its generous financial packages, the French think tank said. For hosting CIs, the CCP has provided foreign universities with annual funding ranging from $100,000 to several million, Chinese language teachers, free teaching materials, and a curriculum designed by Hanban. In some cases, the CI even came with free construction of the language center.

These perks, however, came with strings attached.

Universities, for fear of offending its business partner in Beijing, began self-censoring, staying away from research and discussion on topics deemed taboo by the CCP, including Tibet, Taiwan, and Falun Gong, the report said. Guest speakers deemed controversial by the regime also found themselves given the freeze by universities.

The report listed a slew of incidents around the world where a foreign university with a CI carried out self-censorship in a bid to appease Beijing.

In 2008, Tel Aviv University in Israel shut down an art exhibition depicting the persecution of Falun Gong practitioners in China, after the Chinese consulate threatened to stop funding the university’s CI.

North Carolina State University in 2009 canceled a visit by the Dalai Lama because the Chinese director of the CI warned the university that hosting the Dalai Lama would “hurt” its relationship with Hanban.

In 2013, Sydney University canceled the Dalai Lama’s visit in an apparent bid to protect its relationship with Beijing and its CI funding.

At a 2014 conference hosted by the European Association for Chinese Studies in Portugal, the director-general of Hanban ordered staff to confiscate and tear out pages from the event’s program book because the programs had included material about another conference sponsor—a Taiwanese organization.

“In the Name of Confucius,” a film exploring the CCP’s use of the centers to expand its foreign influence, was scheduled for a screening at Victoria University in Melbourne, Australia, in September 2018. The screening, however, was abruptly canceled by the university after the Chinese director of the university’s CI emailed the dean of business about the Chinese consulate’s “interest” in the screening.

A 2017 report by the National Association of Scholars (NAS) titled, “Outsourced to China,” stated that the most common accusations against CIs relate to its lack of transparency about its relationship with the Chinese regime, as well as its infringement on teachers’ freedom of speech and religious belief.

The report said that Hanban’s eligibility criteria for teachers included the stipulation that teachers have “no record of participation in Falun Gong.” However, language barring Falun Gong members from participation in the program disappeared from the English version of Hanban’s website after a Chinese teacher based in Canada, who was also a Falun Gong practitioner, accused Hanban of discrimination in 2011. Falun Gong, or Falun Dafa, is a spiritual practice that has been severely persecuted by the CCP for more than two decades.

Other eligibility criteria included “good political and professional qualification,” according to the NAS report. A former Chinese diplomat who defected to Australia has previously explained that in the CCP’s language, good political qualification means “forever loyal to the CCP,” the French report said.

Having a CI poses other challenges to a university, including stifling free academic discussion and debate.

“Even the most well established experts in Chinese studies can find themselves isolated and at odds with their colleagues when they raise concerns,” wrote Professor Christopher Hughes, a China expert at the London School of Economics, in a 2014 paper. “The worst-case scenario is when academics no longer feel able to work in a university that does not respect their professional standards, suffering ostracization, exclusion from the university and denial of promotion.”

Malign influence campaigns can also spread beyond the campus. In April, the director of the CI in Bratislava, Slovakia, wrote a threatening letter to the executive director of Central European Institute of Asian Studies, a think tank, according to a Euractiv report. The letter said: “Are you sleeping well? You should be under a lot of stress when you’re walking down the street.”

The letter came in response to a survey conducted by the think tank about the Chinese presence in Slovak universities. It found that cooperation with Chinese entities lacked transparency in the country.

Educators at CIs must also align with the CCP’s worldview and version of history. The French report said that Hanban developed all the materials used by the centers, and formulated a curriculum that aligned with the CCP’s agenda. It noted that Chinese propaganda, although not very sophisticated, can be effective on youth who lack the ability to discern deception.

The report cited Hanban’s video animation about the Korean War, which involved the United States fighting with South Korea on the one side, and the Chinese regime assisting North Korea on the other. The video contained Beijing’s propaganda narrative regarding the war: that the United States manipulated the United Nations Security Council, and that the CCP entered the war to resist U.S. aggression. After this video was exposed, Hanban deleted it from its website; however, records were uploaded to YouTube.

The CCP’s goal was to establish 1,000 CIs worldwide by 2020. However, according to the French report, since 2018, the Hanban website has not updated the total number of CIs worldwide, which stays at 541.

In the United States alone, 67 CIs have closed since 2017, with 36 remaining in the country as of Sept. 9, according to a NAS tally.

The trend is mirrored overseas.

For instance, the Lyon Confucius Institute (LCI) in France closed down in September 2013, the result of a year-long disagreement between Lyon-based administrators and Hanban. LCI was established in 2009. For three years, the Lyon-based administrators refused to integrate LCI in the university, and did not include LCI in the university’s own teaching and research activities.

Hanban assigned a new Chinese director to LCI in September 2012, who strongly insisted on deeper integration of the LCI in the university. He wanted partnerships with research centers in sinology, and promised Ph.D. scholarships for university students willing to study in China. He also asked that the LCI participate in the teaching of the university’s degree programs.

The Lyon-based administrators did not agree to those demands. So the director-general of Hanban demanded the resignation of the chair of the LCI Board and suspended the LCI funding for that year without prior notice. Eventually, Lyon administrators decided to close LCI.

Another case is the closure of Australia’s CI in New South Wales, the country’s most populous state.

Hanban set up the New South Wales Confucius Institute (NSWCI) in the state’s Department of Education—the first of its kind in the world. NSWCI operated a dozen Confucius Classrooms in primary and secondary public schools. Hanban paid an annual grant of $10,000 to the state.

One Australian media report said that when the classrooms were opened, the Department of Education’s regional director, Dr. Phil Lambert, openly discouraged discussions in the classrooms about controversial subjects such as China’s human rights record, Tibet, or the Tiananmen massacre.

In some schools, attending the Confucius Classroom was mandatory, which made some parents upset, saying that the classes amounted to the “CCP’s infiltration to the public school system.”

In December 2019, the NSWCI was terminated.