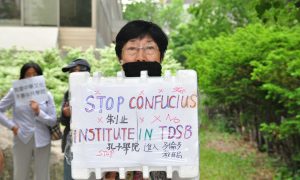 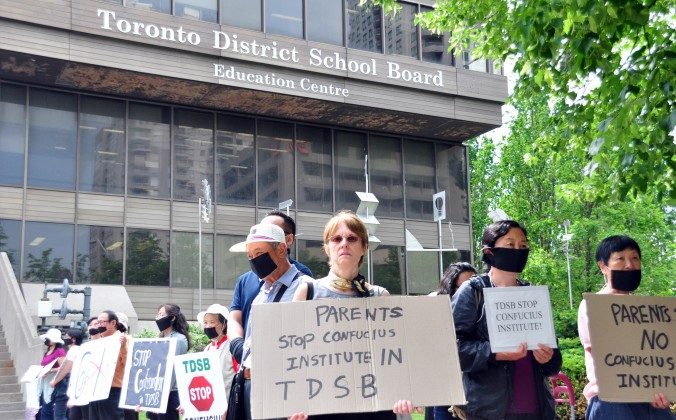 As Toronto District School Board (TDSB) trustees prepare to vote on permanently removing its Confucius Institute from Toronto schools, Beijing is trying to rally support to keep the controversial program.

Run by the Chinese regime and branded as promoting Chinese language and culture, Confucius Institutes have been incorporated in educational institutions in several countries around the world. The institutes, however, have been cited by intelligence agencies as organizations used by the Chinese regime to extend its soft power and even to conduct espionage.

The TDSB voted earlier this year to delay a decision on its partnership with the CI after an outcry from parents and members of the community. But on Oct. 1, a TDSB committee will vote on whether to permanently sever ties with its CI, before the issue will be voted on by the entire board at the end of the month.

With the TDSB reconsidering its partnership with the institute, trustees have received letters from Chinese officials warning that abandoning the program would damage the relationship between Canada and China.

Ahead of Wednesday’s vote, a number of organizations with close ties to the Chinese regime have also attempted to collect signatures in the Chinese community to support CIs.

During the event, the source says, attendees were given a program book in which the organization expressed its explicit support for CIs. Then the organizers gave each guest a sheet of paper asking them whether they support the institutes. Chinese guests were also asked to sign “yes” or “no” regarding a statement that read, “I believe that the Confucius Institute is very important for Chinese culture and children’s education.”

In addition, supporting organizations have been also trying to get members of the Chinese community to attend the Wednesday TDSB committee meeting to voice support for CIs. The Beijing Association of Canada is offering to pay a subsidy for transportation and parking for those who will attend. The situation resembles when former former Chinese leader Hu Jintao visited Ottawa in 2010, and Chinese community members were offered free meals and transportation to Ottawa to welcome Hu and to counter protests against his visit.

Among the organizations supporting the Confucius Institute are the Confederation of Toronto Chinese Canadian Organizations (CTCCO), the National Congress of Chinese Canadians (NCCC), and the Chinese Professionals Association of Canada (CPAC), to name a few.

Michele Juneau-Katsuya, former Asia Pacific head at Canada’s intelligence agency CSIS, says the intelligence community knows all of these organizations are linked to the Chinese Communist Party (CCP) because public evidence and articles exist that link them directly.

He says the use of such organizations by the CCP is a “very powerful strategy” for the Party to advance its own agenda.

“It’s a sort of a mutual relationship where [the organizations] are literally used as agents of influence in their respected countries to first of all report on the Chinese community, then use their political clout to make it able to pressure local politicians and federal politicians to being in favour of China all the time.”

Requests seeking interviews with the NCCC, CPAC, and the Beijing Association of Canada were not answered. The person who answered the phone at the CTCCO hung up when asked about an interview.

In a past interview with Epoch Times, the NCCC denied being controlled by “any party or political force.”

On a local Chinese-language chat room called 51.ca, many users were upset over an article posted on the website about a 4,000-signature petition supporting CIs that was submitted by the organizations to the TDSB.

Most of the comments were against the institutes.

Bootstrap wrote: “I took a look of the books given for free by one of the Confucius Institutes at the Moon Festival Celebration at North York. My God! It has too much CCP ideology. They’ve brought brainwashing to Canada.”

“Private Chinese language schools are allover Canada. What’s the loss for Canada getting rid of this CCP propaganda organization?” said a comment by Nomad.

Another user wrote: “What I saw on 51.CA is people overwhelmingly oppose CI. It seems like only these few support CI.”

Ward 7 trustee Irene Atkinson, who will table a motion before the committee on Wednesday to cut ties with the CI, says a foreign government has no business trying to exert influence on Canada’s education system.

“They have no roles in our democratic country,” says Atkinson.

TDSB chair Mari Rutka says she will hear from all sides, but won’t be intimated into making a decision in favour of one side or the other.

“I think the school board has to operate under the laws and regulations of our city, our province, and our country as a whole, and that’s the bottom line.”