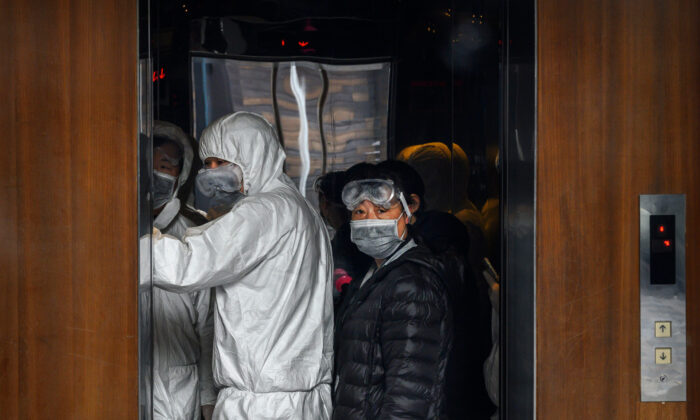 Chinese workers wearing protective suits stand in an elevator at a mall in Beijing, China, on Feb. 9, 2020. (Kevin Frayer/Getty Images)
INSIDE CHINA

Two Chinese districts in virus-stricken Hubei Province have issued “wartime management” orders barring people from leaving their apartment buildings, as the country battles with the deepening coronavirus crisis that has spread mounting fears across the globe.

Zhangwan district in Shiyan city of Hubei Province was first to implement the order and lock down residential buildings.

Starting from Feb. 13, all residential areas in the district will be placed under “wartime management,” according to a notice posted on Wednesday evening.

One measure calls for banning all vehicles from entering and leaving local districts with a few exceptions, such as medical vehicles, police cars, and firefighting vehicles.

Individuals in the district—except for medical workers, outbreak prevention officers, and those delivering basic living supplies—are no longer allowed to leave their apartment buildings, it said.

The district’s outbreak containment unit said the measure was an “extraordinary move” implemented as it was “left with no alternatives.”

It said they will roll out the measure for two weeks before deciding on whether or not to continue with the restrictions.

Earlier on Monday, residential neighborhoods in the entire Hubei Province had banned visitors whose body temperatures were over 99.1 degrees Fahrenheit.

Local cadres and property management officers will be on shift 24 hours to enforce the policy, the notice said.

People will be detained in accordance with the “wartime regulation,” for entering buildings and districts that have been sealed off.

The notice added that neighborhood committee officers will arrange to deliver food and other basic living supplies to people’s doors at specific times. The authorities will also set the prices and decide what types of goods to deliver.

“Daigou,” or surrogate shopping, is now enforced in all villages and districts in Dawu, meaning that residents must buy living necessities and drugs through third-party sellers. The daigou service is guaranteed at least once every three days for every household.

Some over 80 cities across China, including Beijing and Shanghai, have restricted movement to varying degrees.

Inner Mongolia on Feb. 13 also issued a notice shutting down all non-necessary public facilities. Weddings will be halted and all families should remain at home, with only one member going out to purchase groceries, it said.

The party branch within Beijing Center for Disease Prevention and Control on Tuesday also issued a statement, asking all Party members at the agency to “fully recognize the sense of urgency and importance’” at the “critical juncture,” and enter “a state of war.”

To prevent cross infections, the statement prohibited staff from visiting other departments unless it’s work-related. It said people should resort to phone calls or other telecommunication methods to reduce face-to-face interactions where possible.

In a recent appearance in Beijing, Chinese leader Xi Jinping said they are waging an “all-out war” against the outbreak, in which he said the communities are at the forefront.

Xiao Xu, the vice director of Zhangwan district, told state-owned radio network China National Radio that the new lockdown measure was an attempt to control the virus’ further spread as the district has seen an 80 percent jump in infections. He added that they chose the wording “wartime management” to emphasize the gravity of the situation.

Qin Peng, a political affairs commentator, said he suspects the Chinese authorities are doing a trial run in the district. If the results proved effective, they might replicate the measures in other regions, he said.

The “state of war” policy in Beijing appeared to be a way for the city to ease into such a measure and allow people to “adjust to it gradually,” he said during a live program on the Chinese-language Epoch Times.

Tong Zhaohui, the vice director at Beijing Chaoyang Hospital who was sent to Hubei to help fight the outbreak, said he had observed a higher rate of severe respiratory failures among the coronavirus patients.

“Compared to SARS (severe acute respiratory syndrome) in 2003, the respiratory failure this time comes even faster this time, and the lack of oxygen at times can be very apparent,” he said in a Thursday press conference in Hubei. The virus also attacks the patients’ hearts, creating challenges in treatment, he said.