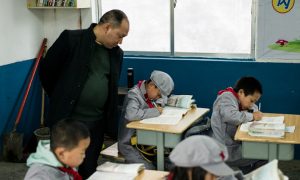 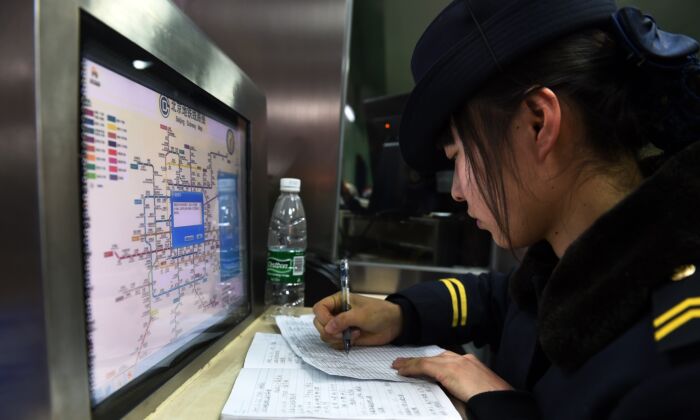 An attendant works in front of a subway map at a subway station in Beijing on Dec. 29, 2014. (GREG BAKER/AFP via Getty Images)
China Human Rights

China’s capital of Beijing plans to install facial recognition cameras at all metro stations for the purpose of monitoring and classifying passengers into “safety” categories. The plan drew widespread criticism for its Orwellian intentions, including from a professor at a prominent Chinese university.

China’s state-run media Xinhua reported on Oct. 30 that Beijing’s metro operator will install a facial recognition system in its metro stations that is integrated with the country’s social credit system, whereby citizens are assigned a “trustworthiness” score based on their public behavior.

Passengers will be sorted into different categories based on their score. Station staff will then conduct different security check procedures accordingly.

The metro company said that this system is designed to speed up the security checking process at metro stations.

Since 2008, most metro systems in major Chinese cities have strict security checks on all passengers and their bags.

And since 2014, metro companies have deployed a so-called “checks on humans and materials” system, whereby all passengers must go through airport-style body scanning machines and all luggage and bags need to pass through screening machines.

For pregnant women, children shorter than 1.2 meters (about 4 feet), and the disabled who cannot easily go through the machines, they need to be checked by security agents before entering the station.

The security checks usually cause long queues out of major metro stations in big cities. State-run media Beijing News reported that during peak travel time, passengers in Beijing typically have to wait for roughly 15 minutes to pass security check and enter a station.

During politically sensitive periods, such as when the Chinese Communist Party (CCP) convened its once-in-five-years National Congress in Oct. 2017, Beijing metro stations increased security measures, causing most passengers to spend up to 60 minutes waiting during peak times.

Lao Dongyan, a professor at Tsinghua University Law School, expressed her concerns about the new plan by posting a long commentary on her WeChat account. WeChat is China’s most popular social media platform.

“[The CCP government] has collected a lot of personal data already, including what websites you have browsed, what news and videos you have watched, what goods you have purchased, who you chatted with on WeChat, your likes and dislikes,” Lao wrote on Oct. 31.

Lao added that there were privacy concerns with who gets access to citizens’ personal data. “We don’t know how they will use our data and how they will control our lives. Furthermore, hackers may steal our data and the data may be leaked due to improper protection,” she wrote.

As a legal expert, Lao said that one’s facial pattern is considered important biometrics data. Thus, the government does not have the right to collect this data without first obtaining permission from the person.

“Who gives the transportation department [Beijing metro company] the right to classify passengers? According to what law are they allowed to do this? Which kind of standard will they use to sort passengers?” Lao questioned the legality of the planned system.

Lao also didn’t think the system could speed up security checks at metro stations. “My personal experiences of checking in at hotels and airplanes tell me that [a facial recognition system] can barely [speed up the checking process],” Lao wrote.

Lao said she was most concerned about authorities misusing the data. “If they misuse the data, I don’t know what my family and I will lose. It could be wealth, reputation, our jobs, freedoms, health, and even our lives,” Lao wrote.

Aside from facial recognition, Chinese authorities have also launched an emotion recognition system, which can judge a passerby’s emotion as they walk by security cameras.

The Financial Times (FT) reported on Nov. 1 that the technology was the focus of a recent surveillance tech expo held in Shenzhen City, the largest such event in China.

Li Xiaoyu, a policing expert and Communist Party cadre from the public security bureau in Altay City in the northwestern region of Xinjiang, told FT that authorities have begun using the technology at customs, which can detect signs of aggressiveness and nervousness, stress levels, and a person’s potential to attack others.

The region is home to Uyghurs and other Muslim minorities who are subject to constant surveillance, religious suppression, and face detention in concentration camps where they undergo political indoctrination.

Li claimed that the technology can help prevent illegal acts including terrorism and smuggling. The Chinese regime has used the “terrorism” claim to justify its suppression of Uyghurs and other minorities in Xinjiang.

Gong Shujia, an American Chinese Ph.D. of electronic communication engineering, told Radio Free Asia on Nov. 1 that emotion recognition is not a newly developed technology. However, it has the potential to be used for all-invasive monitoring on the populace, she warned.

“The technology can calculate the person’s thought patterns and detect emotions,” Gong said. “It can monitor every detail of society.”