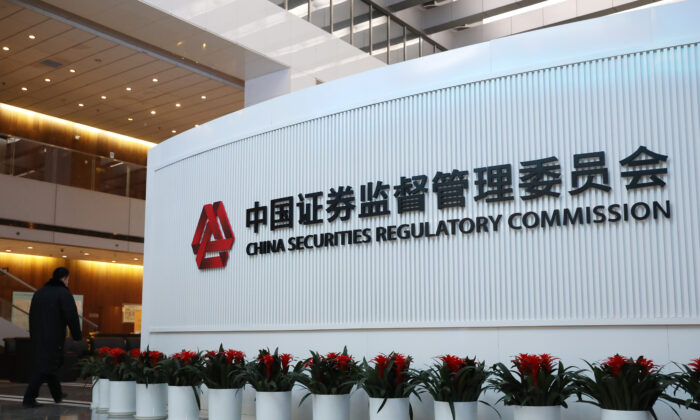 A sign of the China Securities Regulatory Commission (CSRC) is seen at its headquarters in Beijing, China, on Nov. 16, 2020. (VCG via Getty Images)
Thinking About China

Beijing May Not Comply With Audit Rules for US-Listed Firms

Five Chinese companies listed on U.S. stock exchanges said on Aug. 15 that they would voluntarily delist. The companies included Sinopec, China Life Insurance, Aluminium Corporation of China, PetroChina, as well as Sinopec entity Sinopec Shanghai Petrochemical Co. All of these companies were targeted by U.S. regulators for possible delisting as a result of their refusal to comply with U.S. audit requirements.

For decades, regulators have demanded that the 200 Chinese companies listed on U.S. exchanges comply with the same audit requirements as all other listed companies. The Chinese side has argued that the financial records of their companies are sensitive data and that due to security concerns, Chinese law prohibits firms from submitting their financial records to foreign auditors.

Since the Holding Foreign Companies Accountable Act became law in 2020, the Securities and Exchange Commission (SEC) has stepped up its enforcement of audit rules. As of the final week of August, 163 Chinese companies, including Alibaba, faced possible delisting.

Goldman Sachs estimates that Americans have about $200 billion invested in Chinese companies, and there was concern about what delisting would mean for these investors. If Chinese companies are forced to delist, the value of their shares could drop by 13 percent, according to Goldman analysts.

On Aug. 26, the China Securities Regulatory Commission and the U.S. Public Company Accounting Oversight Board (PCAOB) reached an agreement, which according to a statement by the PCAOB, would grant U.S. authorities unrestricted access to the necessary financial records. American investors welcomed the news as U.S.-listed Chinese stock prices rallied. However, legal experts have warned that optimism may be premature, as it is yet to be seen if the U.S. and the Chinese sides interpret the agreement in the same way and if the Chinese will comply.

The PCAOB similarly cautioned investors—it stated that it would have to wait and see if China continues to obstruct access or not. Continued obstruction would be a violation of the Holding Foreign Companies Act. The first audit inspections are expected to be carried out in September, with the PCAOB making a determination by December as to whether or not Beijing is aiding or hindering U.S. access to Chinese company financial data.

Immediately following the agreement, both Beijing and the PCAOB issued statements. Beijing’s reaction emphasized that the agreement must be one of “equal” cooperation and that the U.S. regulators would have to request the documents through the Chinese regulators. The latter would also be involved in interviews and the taking of testimonies.

This statement by Beijing directly conflicts with the statement issued by the PCAOB, which said that the PCAOB would be granted “sole discretion to select the firms, audit engagements and potential violations it inspects and investigates—without consultation with, nor input from, Chinese authorities.” The statement said that the “PCAOB has direct access to interview and take testimony from all personnel associated with the audits the PCAOB inspects or investigates.” Based on these statements, it appears that the two sides are already in disagreement.

Meanwhile, the China Securities Regulatory Commission (CSRC) said that the agreement would only come into effect if it met the requirements of regulators in both countries. It remains to be seen if Beijing will grant sufficient access to U.S. regulators in order to meet U.S. requirements. Meanwhile, current U.S. regulations state that companies out of compliance could be delisted by 2024.

Given the partial recovery of Chinese stock prices after the agreement was signed, Goldman Sachs estimates that investors feel it is only 50 percent likely that Chinese companies will be forced to delist. This is an improvement from the pre-agreement sentiment. In March, investors believed the likelihood of delisting was about 95 percent.

In addition to skepticism about Beijing’s compliance with the new rules, continued U.S. investment in Chinese firms may be restricted by the so-called “Reverse CFIUS.” Currently, the Committee on Foreign Investment in the United States (CFIUS) can monitor and evaluate Chinese investments in the United States and recommend their termination if national security is threatened.

Between existing legislation, proposed legislation, and Beijing’s history of non-compliance, the threat of delisting Chinese stocks seems far from over.