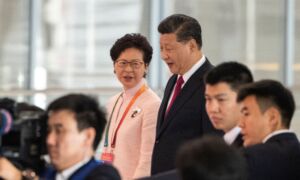 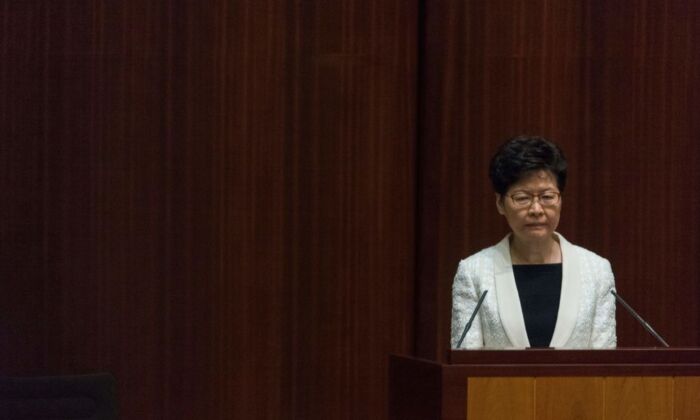 In a bid to lure Hongkongers into integrating with the mainland, Chinese authorities recently launched 16 new policies to encourage Hongkongers and Hong Kong businesses to invest or settle in the Greater Bay Area—an economic zone consisting of nine mainland Chinese cities and the cities of Hong Kong and Macau, former European colonies that reverted to Chinese sovereignty in 1997 and 1999 respectively.

Located in the Pearl River Delta in southern China, the Greater Bay Area is being developed and billed by the Chinese regime as an emerging tech hub akin to Silicon Valley.

Meanwhile, Chinese netizens were incensed at the news of such policies, which give Hong Kong citizens more privileges to immigrate to the region than mainland Chinese from outside the Greater Bay Area.

Lam met with Han as the city entered its fifth month of mass protests, stemming from Hongkongers’ dissatisfaction with Beijing’s creeping interference in local affairs and Lam’s pro-Beijing government.

Later, the Hong Kong government released the 16 policies on its official website.

Lam told reporters that previously, Hongkongers would have to live, study, or work for a period of time—in addition to paying income and social security taxes—before becoming eligible to buy a house in the Bay Area. The new policy would cancel these restrictions and designate Hongkongers the same rights as local residents.

Even migrants from outside the cities do not enjoy such privileges. The Chinese regime has a household registration system, called “hukou” in Chinese, that restricts people’s movements within the country. For example, a citizen can’t receive education, pensions, or other benefits in an area outside the city where he or she is registered. It is typically very difficult to change one’s hukou registration.

Shenzhen City, for example, a tech manufacturing hub just across the border from Hong Kong, attracts many young migrants from all over the country to work there.

According to the Shenzhen government’s rules, a person without a Shenzhen hukou must pay income and social security taxes for five consecutive years before he or she has the right to buy an apartment or house in the city.

In addition, Hongkongers would be able to apply for a two- to five-year visa or resident card if they wish to work, study, or live in the Bay Area. Hong Kong lawyers and construction workers would also be allowed to work in the mainland after taking and passing Chinese professional exams.

The news generated a lot of heated discussion on Weibo and other popular Chinese social media platforms. Many were angry that Hongkongers could enjoy the benefits of living in top-tier Chinese cities, but they couldn’t.

“Aren’t we being treated like the lowest of the low?” Chinese netizen Zao Qilai wrote.

“I want to ask everybody: ‘Do you still have the passion to be a patriot?’” Chinese netizen YooYue said on Weibo on Nov. 7, asking whether it was worth being patriotic to a country that doesn’t treat its citizens well.

“A car with other cities’ license plates cannot enter Shenzhen without obtaining a permit, but a car with a Hong Kong license plate can enter freely,” Shenzhen netizen Mimei said on Weibo on Nov. 7.

“As a Guangdong resident, I really dislike these policies,” Netizen Hetao said on Weibo. She said that real estate prices in the Bay Area have soared since Beijing promoted the area for domestic and foreign investment.

With the rollout of the latest policies, Guangdong residents expressed worries that housing prices would be pushed even higher.