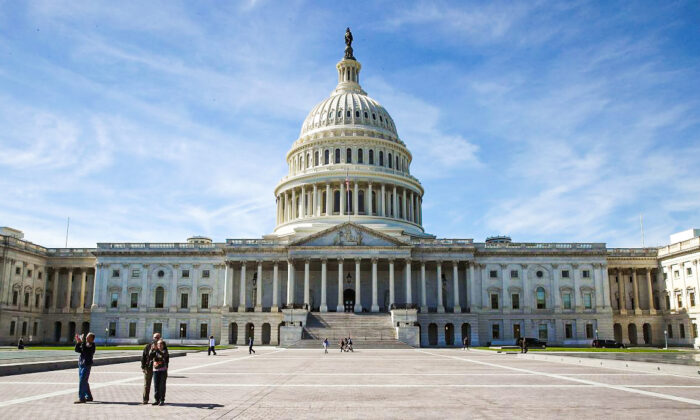 The US Congress in Washington, DC, on Oct. 11, 2016. (Mark Wilson/Getty Images)
Thinking About China

The FBI should investigate anyone who follows CCP instructions

Beijing is pressuring Americans to reject legislation aimed at making the United States more competitive against China. The FBI should investigate them, but the legislation itself is toothless.

Over the last few weeks, the Chinese embassy in the United States boldly sent letters to, and met directly with, U.S. executives, businesses, and trade associations, to ask them to lobby against bills in Congress that seek to improve American competitiveness.

According to a Nov. 13 report by Reuters, “Chinese officials warned companies they would risk losing market share or revenue in China if the legislation becomes law,” according to a letter from the economic and commercial office of the embassy.

If Chinese Communist Party (CCP) officials put that in writing, imagine what they say behind closed doors.

Reuters’ sources worry that complying with the Chinese letters would put them in violation of the Foreign Agents Registration Act (FARA). They should worry, and the FARA legislation should be more thoroughly enforced against individuals and businesses that lobby for soft-on-China policies, or donate to soft-on-China groups such as the National Committee on U.S.-China Relations (NCUSCR), the Asia Society, the Committee of 100, or the China General Chamber of Commerce (CGCC).

Such donations demonstrate to Beijing that a company is “friends with China,” and thus deserving of special privileges such as the granting of market share and other business opportunities in China.

The CCP controls business and foreign profits in China through stricter business laws, but also through CCP cells that businesses are required to maintain within their management structure. As Chinese investment in American and allied businesses increases, they seek board memberships in U.S.-headquartered corporations as well.

A Chinese embassy letter sent in November to at least four of Reuters’ business sources said, “We sincerely hope you … will play a positive role in urging members of Congress to abandon the zero-sum mindset and ideological prejudice, stop touting negative China-related bills, delete negative provisions, so as to create favorable conditions for bilateral economic and trade cooperation before it is too late.”

The letter continued: “The result of those China-related bills with negative impacts will not be that the interests of U.S. companies will be protected while those of Chinese companies will suffer. It is only going to hurt everyone. Promoting a China-free supply chain will inevitably result in a decline in China’s demand for U.S. products and American companies [sic] loss of market share and revenue in China.”

But Chinese officials may be worrying about the wrong thing, or not worried at all. The U.S. Innovation and Competition Act (USICA) and the Ensuring American Global Leadership and Engagement (EAGLE) Act, both of which the embassy letter mentioned, are seen as tough on China, but both are full of loopholes.

They include, for example, over $240 billion in subsidies to boost technology at U.S. corporations and agencies whose cybersecurity is often penetrated by CCP-linked hackers. The new technology developed with U.S. taxpayer money can later be stolen or sold to China by the unscrupulous who put their own profit before the existential threat that the CCP poses to America and democracy globally.

As Walter Lohman from the Heritage Foundation noted, “The USICA subsidies are the wrong way to make American businesses competitive with Chinese firms, but if they become law, we ought to at least make sure we’re not indirectly subsidizing American business operations in China itself.”

If time is on Beijing’s side—and arguably it is due to the country’s exponential economic and military growth, and increasing political influence in the United States and among our allies—we should defeat the CCP with the technology we already have, before funding more tech that Beijing can steal anyway.