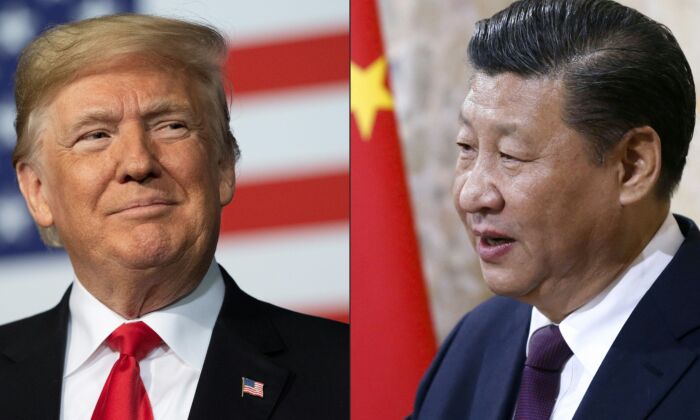 Beijing Holds Off on US Election Congratulations, as State Media Optimistic About Biden

China’s foreign ministry said it would wait for the U.S. presidential election results to be finalized before congratulating the winner, while Chinese leader Xi Jinping has yet to formally respond.

Meanwhile, state-run media have published several editorials expressing hopes that the U.S.–China relationship they envision would come true under a Biden administration.

The U.S. election results have yet to be finalized as several states are pending recounts while others have legal challenges.

Since then, some world leaders have sent congratulations to Biden and his vice presidential candidate Kamala Harris via their personal Twitter accounts, such as French President Emmanuel Macron and German Chancellor Angela Merkel.

On Nov. 9, spokesperson for Chinese foreign affairs ministry Wang Wenbin said at a daily press briefing in Beijing: “We have noticed that Mr. Biden has declared election victory. Our understanding is that the result of the U.S. presidential election will be determined following U.S. law and procedures.”

When asked by a reporter why Xi has not sent congratulations publicly, Wang replied, “We will follow international practices.”

Prior to Election Day, state media published editorials in favor of a Biden win.

The Chinese Communist Party agency that oversees its security apparatus, the Political and Legal Affairs Commission (PLAC), operates a newspaper called Legal Daily. In its weekend edition published on Nov. 8, the paper declared that Biden and Harris won.

“The world can be a little bit relieved because we won’t have the over two-month election dispute like Bush v. Gore in 2000,” Legal Daily claimed.

The report added that Biden finally fulfilled his lifelong wish, which is “an enormous achievement,” and Harris “created history by becoming the first female vice president.”

Global Times, which is operated by the Party’s elite Central Committee, wrote on Sunday: “Biden as the next U.S. president is a foregone conclusion.”

The article went on to analyze that bilateral relations would be tense surrounding human rights issues, such as Xinjiang and Hong Kong. But a Biden administration would likely cooperate with Beijing on combating the CCP virus pandemic, climate change, trade, and academic exchange, such as Chinese students and scholars would be able to study in the United States.

In the past four years, the Trump administration has sought a more hardlined policy toward Beijing, imposing punitive tariffs, sanctioning officials for human rights abuses, and limiting student visas and other measures to stem intellectual property theft.

The English-language paper China Daily, operated by the propaganda ministry, ran an editorial titled “Relations Can Be Reset for the Better” on Nov. 8, claiming that a Biden administration would rebuild the relationship with Beijing.

Commenting on the difference between officials and state media’s response, U.S.-based China affairs analyst Tang Jingyuan noted that though the Chinese regime hopes for a Biden win, “Xi Jinping doesn’t want to anger President Trump, who has the power to launch tougher trade policies and so on in the following weeks.”

Beijing also may not have confidence that Biden will emerge the victor after legal challenges are resolved, he said.

The editorials may also serve the purpose of misleading the Chinese populace. “It may report Biden as a victim if Biden loses the election,” Tang added.

On Nov. 8, CNN reported that it spoke to inside sources who claimed that the First Lady Melania Trump and senior adviser Jared Kushner advised the president to accept a Biden victory.

Senior adviser to Trump’s reelection campaign Jason Miller refuted the CNN story in a Twitter post on Sunday morning: “Given undetermined electoral outcomes in multiple states and serious voting irregularities and lack of transparency in others, Jared has advised @realDonaldTrump to pursue all available legal remedies to ensure accuracy.”

On Sunday afternoon, the First Lady also posted a tweet: “The American people deserve fair elections. Every legal – not illegal – vote should be counted. We must protect our democracy with complete transparency.”