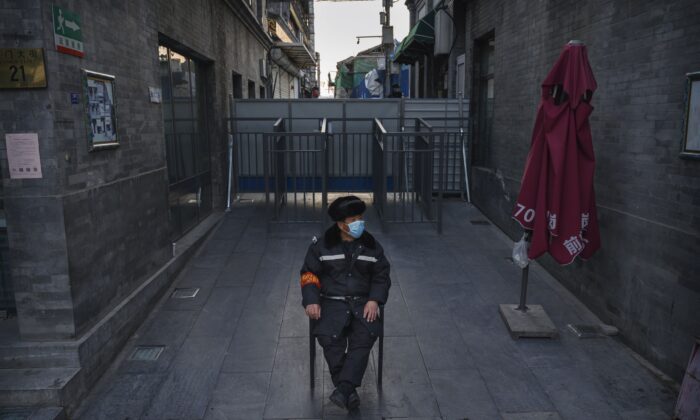 A Chinese guard wears a protective mask as he watches an area near a barricade blocking a residential community from a commercial area in Beijing, China, on March 11, 2020. (Kevin Frayer/Getty Images)
Analysis

The Chinese Communist regime recently publicized its engaging of citizen to carry out stability maintenance during the Winter Olympics.

On Dec. 2, Guo Shengkun, the Secretary of the Political and Legal Affairs Commission, touted the importance of grasping political security through adopting the “Maple Bridge experience,” and deepening “grid management.”

The Maple Bridge experience was a 1960 pilot movement that engaged the people in a regional struggle in Maple Bridge Town, Zhejiang, an eastern, coastal province in China.

Mao Zedong praised the effectiveness of the project and promoted the movement nationwide. This civil struggle model facilitated infiltration of the communist governance at the grassroots.

Grid management was a digital intervention of “mass control in the socialist society” in recent years. It was first tried in Dongcheng District of Beijing in 2004. Grid staff members of various levels were designated according to the sizes of the areas covered, and in charge of local patrols and neighbourhood information gathering.

It is a top-down governance mobilizing ordinary citizens, and the surveillance is in the guise of a social service; suppression gets to the individual level through mobile phones.

In China’s capital, the popular “Chaoyang masses” and “Xicheng aunts” are public informants and can be seen as the modern Red Guards mobilized in Beijing’s districts of Chaoyang and Xichang by local governments.

A 2019 Chinese media report indicated that they are a combination of the Maple Bridge experience and grid management.

According to a Dec. 8 media report, local grid management has been expanded to meet the demands of the Winter Olympics. Grid staff are dispatched to engage in community visits and security checks of “special targets” to ensure the safety of the Games.

Earlier, on Nov. 28, China’s Minister of Public Security, Zhao Kezhi, called for a foolproof measure to safeguard the Olympics.

According to official data from the the government of Zhangjiakou, in one of the three competition zones the public security bureau arranged for a budget of $75.54 million in the 2020 fiscal year, an increase of 5.1 percent over the previous year.

When Chinese premier Li Keqiang called for governments at all levels to live on a tight budget in 2019, and reiterated this on March 12, in the name of stability maintenance for the Winter Olympics, the suppression machinery continued to gear up no matter the cost.

The Zhangjiakou budget form explained the increase was to cover additional expenses required for big data construction, video surveillance installation, and enhancement of policing forces; that is, projects to ensure public security during the 2022 Winter Olympics.

In early December, high-definition surveillance cameras were already placed at intersections in the village, “directly connected to the terminals at the public security bureau,” a local resident of Beijing suburbs told the Chinese edition of The Epoch Times.

On Nov. 30, a Chaoyang police officer called a local resident and said, “The Winter Olympics is approaching, do not go out … there have been several arrested elsewhere,” reported Minghui, a U.S.-based website that tracks the persecution of Falun Gong in China.

The call was meant to warn Han Fei, a Falun Gong adherent living in Beijing, of the increased surveillance.

She has been subject to the local police routinely monitoring and warning her on so-called sensitive days, as designated by the regime, since Dec. 2019.

In the aforementioned Zhangjiakou public security budget form in 2020, under the category of National Security Special Work, Falun Gong was the first target mentioned.

Since Jiang Zemin, former leader of the regime, ordered the persecution of Falun Gong in 1999, the adherents have been subject to severe monitoring, harassment, surveillance, stalking, detention, imprisonment, and even torturing to death on sensitive days.

Since 2020, the arrests of Falun Gong adherents have increased, court trials expedited, and the persecution of the elderly heightened.

In 2021, at least 930 adherents were sent to jail between January and September.

Communism Fears the Power of Peace

Wu Zuolai, a survivor of the 1989 Tiananmen Massacre, told The Epoch Times that the suppression of Falun Gong during the 2008 Beijing Olympics was very severe. He was in Beijing in 2008, and a director of an academic journal owned by the Chinese National Academy of Arts.

Among them was Yu Zhou, a musician living in Beijing.

Wu Zuolai believes that the persecution of the peaceful Falun Gong adherents continues to this day because the CCP fears the power of peace.

He said, “It doesn’t care about radical force, which can be killed with a gun,” but the peaceful power, such as what Falun Gong has, rights defending lawyers, democratic activists could directly expose its persecution and cruelty to the international community, “which would negatively impact the CCP.”

Stain on the Olympic Spirit

On Dec. 3, Congressional-Executive Commission on China (CECC)  Co-Chairs Jim McGovern and Jeff Merkley released a video announcing the Olympic Prisoner Project that will highlight a political prisoner a day for 60 days before the Beijing Olympics, “the stain the regime put on the Olympic spirit.” (Video of their announcement)

On Sept. 9, 2020, over 160 human rights advocacy groups delivered a joint letter to the International Olympic Committee (IOC) President, Thomas Bach, urging the Committee to “reverse past mistakes” in awarding Beijing the 2022 Winter Olympics.

The joint letter reminded Bach that the prestige of hosting the Olympic Games “merely emboldened the Chinese government’s actions” and led to “a gross increase on the assault on communities living under its rule.”

Despite countries such as the United States, Australia, Canada, Lithuania, the United Kingdom, and Japan, responding to the human rights issue in China with diplomatic boycotting of the 2022 Winter Olympics, analyst Li Xi (pseudonym) believes that the regime will only become more blatant in its atrocities if the majority of the world’s countries choose to keep silent.

Wu Zuolai also commented on the fact that if international pressure was based on the number of rights abuses exposed, it would only force the regime to become more cunning.

“It blocks information, and kills the defending of rights at the budding,” he said, the regime is taking the approach of “information crimes.” It imposes horror on those who seek the truth through the internet.

He said, by hosting international events such as the Olympics, the Chinese Communist Party (CCP) extends its campaign of suppression, and deceives people into believing that it’s doing so in the name of stability maintenance.

A Beijing resident, asking to remain anonymous, told the Chinese edition of The Epoch Times, that “International events are important political tasks to the CCP. It is a show at all costs, because it creates a so-called prosperous age under the CCP rule.”

He said, “This is the inferior nature of all communist regimes since the Soviet Union.”