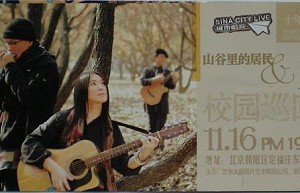 On April 3, 2008, Xiaojuan, the singer in the threesome folk song group “Xiaojuan & Co-Residents in the Valley” published a new song titled “City in the Sky” on her blog. This new song, an instrumental, is a sad song. Guitar is played by Xiaoqiang. The drums, harmonica and vocals of Yu Zhou are absent. Xiaoguang, a new player in the trio, contributes on flute. Meanwhile, on the blog a picture of the band showing Xiaojuan and Xiaoqiang with Yu was obviously gone. It is clear that “City in the Sky” is a song which expresses the band's grief over their recent loss of Yu.

“Xiao Juan & Co-Residents in the Valley” is a famous folk music team that has been touring China for many years. The band was extremely successful in 2007 when they recorded their first big hit. The popular band held many concerts receiving much attention in the press of the country.

On December 28, 2007, Beijing Youth Daily published a lengthy article on the band. The article noted that the band was started by Yu in 1998.

However, on January 26, 2008, Yu was driving home with his wife Xu Na after a concert. Their car was stopped by the police on Yangzhuang Road in the Tongzhou District, Beijing. They were stopped under the authority of the Olympic security check.

When police discovered that Yu and his wife were Falun Gong practitioners, the couple was immediately detained at the Beiyuan Police Station in Tongzhou.

By the time Yu's family arrived at the Emergency Center, police were positioned everywhere. Police followed family members closely and videotaped them while interrogating family members to create a horrible situation. Police surrounded Yu's body when family members were getting close. The body was covered with a white cloth including most of his face. Yu's eyes were still half open. The black pupils seemed to be looking at his family members, as if he was trying to tell them something.

When a family member touched Yu's leg, it was already ice-cold. Yu's family questioned the police upon seeing Yu's tragic death. The police immediately pushed them out of the room, threatening them that if they dare to make an issue of this, their entire family would be arrested. From the time Yu's family entered the room to the time they were pushed out, it was less than two minutes. That emergency room theatrics were staged only to fool Yu's family. In fact, Yu had been already dead before his family had arrived.

On May 6, Yu's sister, in the People's Procuratorate, was shown a death certificate that listed cause of death as “natural causes.” She responded, “Natural cause is what you claimed. We family members don't think so and we don't agree.”

Right now, Yu's body is being held in cold storage at the Qinghe Emergency Center. The People's Procuratorate claimed they didn't want to further handle this issue until Yu's wife, Xu Na, is released. Police have continued to harass Yu's family and Xu Na's family. After the couple was arrested, Xu's parents and her sister's home were raided by the police. After Yu's death, the police of the Xiangshan area in Beijing constantly harassed Xu Na's parents, threatening that they were not allowed to disclose any information to the outside. The old couple has been forced to stay at home.

The Chinese press has used vague wording when reporting the current situation of this famous folk band. All written articles have tried to avoid the fact that Yu died while in police custody. On March 13, Youth Weekend published an article titled, “Secret Voice From the City.” In the article, Youth Weekend said that “listening to Xiaojuan singing” is the hottest entertainment spread by word of mouth, with the picture showing Xiaojuan, Xiaoqiang and Xiaoguang. It did not mention Yu's name. The article said, “Not long ago, one band member left. This is something Xiaojuan didn't want to talk much about.”