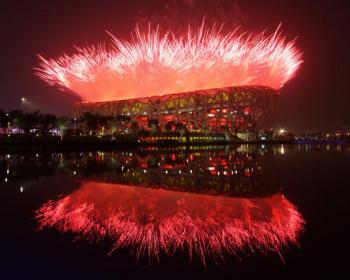 An Olympic Joke: ‘Produced by CCTV’

The flap over the faking of part of the fireworks show for the Beijing Olympics Opening Ceremony reminds one of an old joke.

Jiang pulls his chin, thinks, and says, “Well, I would like to see what each is like first.”

The gatekeepers agree, and the gatekeeper for hell shows him a video of hell. He sees people drinking and dancing and laughing.

The gatekeeper from hell says, “So, do you want to come in?”

Jiang says, “Wait, I want to see what heaven is like, too.”

The gatekeeper for heaven then shows Jiang a video of heaven. Everyone in heaven is seen to be working very hard, cleaning windows and mopping floors.

After the video ends, Jiang says, “I have decided. I will go to hell!”

The gatekeeper from hell bows his head in assent, and opens the gates of hell.

Jiang walks in, the doors close behind him, and he looks upon a scene of horror. Masses of people are wailing and screaming in agony as they are burned in a lake of fire.

Jiang turns back to the gatekeeper and says, “But what about the video I saw?”

The gatekeeper replies, “That was produced by CCTV.”

Note: CCTV, China Central Television, is the major TV network in China run by the Chinese regime. It is directed by the Propaganda Department of the Chinese Communist Party.