Is Beijing’s Propaganda a Sign of a Coming War With the U.S.?
0 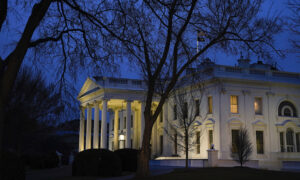 The Chinese regime has leveraged identity politics in the West to deflect attention from its role in causing the global COVID-19 pandemic, according to historian Victor Davis Hanson.

Over the past few months, Beijing has deployed an aggressive information campaign aimed at shaping the narratives surrounding the pandemic in its favor. That involves trumpeting itself as a global leader in fighting the disease, suggesting that the virus originated from outside of China, and criticizing other countries’ handling of the outbreak, while obscuring its coverup of the initial outbreak.

One element in this strategy is playing the victim card, Hanson said.

“They understand the mind of the left, that they can somehow pose as a victim—even though they were the victimizer in this crisis.”

The regime in Beijing does this, Hanson says, by branding themselves as part of the American “other”—that is, not part of the white majority.

In March, the regime lashed out at President Donald Trump and other U.S. officials for using the phrases “Chinese virus” or “Wuhan virus” to describe the disease, calling them racist and xenophobic. During the early stages of the outbreak, Chinese state media had itself used the name “Wuhan pneumonia” in its reporting.

“China is a victim not only of the disease itself, but also of disinformation,” Cong Peiwu, China’s ambassador to Canada, claimed in a recent interview with local media outlet Global News.

The result of this strategy, Hanson said, is that Westerners are “much more careful to say anything negative about China, because they’re going to come completely back, and then tap into the identity-politics movement.”

Hanson pointed to the regime’s hypocrisy, “They’re a monoracial culture for the most part, and they’ve been very racist in their policies toward other countries.”

He added: “They have a million people in reeducation camps. They practice a systematic discrimination against Africans who they ostensibly champion. They’ve destroyed the culture of Tibet, and yet, they pose as shocked and disillusioned with American xenophobia and racism and illiberality.”

While the Chinese regime has lashed out at instances of anti-Chinese racism overseas amid the pandemic, it’s failed to stop racist treatment of Africans at home. As a result of virus-related discrimination, African migrants in the southern Chinese province of Guangzhou have been barred from shops, restaurants, and hotels, and evicted from their homes.

Hanson called out Western media outlets that have repeated the Chinese regime’s propaganda in order to criticize Trump.

“We had this Orwellian situation where the media was not just anti-Trump, but was actually picking up talking points from China,” he said.

“By that, I mean, they would say, well, China did much better than Donald Trump and handling the virus, they have fewer cases and few fewer fatalities—even though we know that none of the information from China could be trusted.”

Calls from the United States and Western countries for the regime to provide information concerning the origins of the virus are likely to go unheeded by the regime, Hanson says.

“I don’t think we’re going to find that because to get that information would be synonymous with an admission of culpability,” he said, noting that the information, at best, would reveal Beijing’s failure to disclose what it knew about the outbreak in a timely manner, and at worst, could show the virus was leaked from a lab.

Such an act would, in effect, amount to the regime saying, “We, the Chinese Communist Party, are responsible for killing a quarter-million people so far … and destroying the economy as we know it,” Hanson said.

“We’re never going to hear that from them. I can’t think of a communist government in the history of civilizations that’s ever been veracious or transparent.”