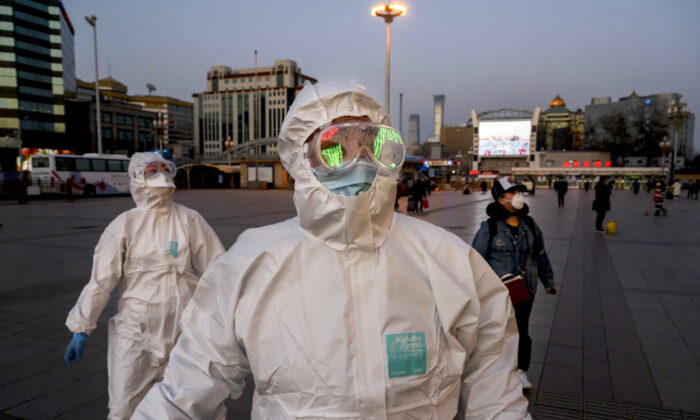 A sprawling and aggressive disinformation campaign unleashed globally by the Chinese Communist Party (CCP), sparked by a motley mix of internal failures, aims to upend the narrative over the pandemic—and it’s happening in real time.

The propaganda push, which has escalated in recent weeks, aims primarily to deflect blame over the Chinese regime’s botched handling of the CCP virus (widely known as the novel coronavirus), sow discord internationally, and portray the image that the regime has contained the outbreak.

Former U.S. government officials, China experts, and national security consultants told The Epoch Times that the disinformation campaign points to a bigger issue—Beijing’s global aspirations. The campaign has helped stir anger from Chinese citizens away from the regime and toward the United States, which has increasingly been a target of its propaganda. And some in the United States are buying it.

“Deception, disinformation, manipulation, distortion of the facts, obscuring their true intentions, and the patient steady erosion of the will to resist on the part of others is something that very much feeds into the global ambitions of the Chinese Communist Party to dominate the world,” Frank Gaffney, former assistant secretary of defense for international security policy during the Reagan administration, told The Epoch Times.

“It’s just one manifestation of it, but it’s a particularly insidious one, and it’s one that we ought to be alive to now,” said Gaffney, who is the executive chairman of the Center for Security Policy.

“Because, in some ways, it’s the leading edge of the larger, longer-term, and even more dangerous effort they [China] are mounting.”

Internal government documents obtained by The Epoch Times have highlighted how the regime purposefully underreported cases of the CCP virus and censored discussions of the outbreak, helping to fuel the spread of the disease, which is now confirmed to have infected more than 240,000 people internationally.

Chinese officials and state-run media have amplified conspiracy theories on social media platforms such as Twitter, most recently pushing claims that the origin of the virus isn’t clear, or came from the U.S. military, or that the CCP’s containment efforts bought time for the rest of the world to prepare.

State-run Chinese outlets, many of which have an English-language website, have pushed these theories almost daily, with some articles even threatening the United States directly, as seen in a March 17 editorial in Xinhua, which stated, “The U.S. side should immediately correct its wrongful behaviors … before it is too late.”

Although Chinese citizens are blocked from using Twitter, bots have been swarming the platform to defend the communist regime, attack the United States, and parrot propaganda narratives. A Twitter spokesperson didn’t respond to a request for comment about whether the company is aware of the bots and if it has any plans to remove them.

Another narrative gaining traction in U.S. media holds that calling the pathogen “the Wuhan virus” is racist, despite the fact that Chinese state-run media have used the term themselves, as seen in Xinhua, the Global Times, and elsewhere. Previous diseases such as Ebola, Zika, the West Nile virus, Lyme disease, and the Spanish flu are all named after the location where the virus emerged.

Joseph Bosco, a former China country desk officer in the Office of the Secretary of Defense (2005–2006), told The Epoch Times the aim of the regime’s sprawling disinformation campaign is to “shift blame and escape responsibility for its gross negligence and lack of cooperation with international health organizations.”

Bosco, a national security consultant and a fellow at the Institute for Corean-American Studies, said there’s an underlying reason why the United States was specifically targeted.

“Communist China sees the U.S. as the main obstacle to its aggressive global ambitions,” he said. “It seeks to enhance the CCP’s credibility and legitimacy, and to delegitimize the U.S. and the West.”

The United States can combat the disinformation push “by fighting CCP lies with the truth,” Bosco said. He said the administration should “demand and impose reciprocity on all aspects of U.S.–China relations,” as President Donald Trump has mentioned before.

The disinformation campaign hasn’t gone unnoticed. In recent days, Trump administration officials and U.S. politicians have spoken out against China’s recent propaganda push. At a March 17 briefing, Trump said: “China was putting out information which was false, that our military gave this [virus] to them. That was false, and rather than having an argument, I have to call it where it came from. It did come from China.”

Bonnie Glaser, a former consultant for the departments of Defense and State, said Beijing seeks to protect the portrayal of its country internationally, as well as internally. She noted that there already several legal cases that Americans are filing against China, including The Berman Law Group, which recently filed a federal class-action lawsuit against the Chinese regime for causing the pandemic.

“It will harm China’s global image if Beijing is blamed for mismanaging the epidemic early on and allowing it to affect the rest of the world,” Glaser told The Epoch Times via email. Glaser is a senior adviser for Asia and director of the China Power Project at the Center for Strategic and International Studies.

“China seeks to be seen as a responsible global player that can contribute effectively to addressing global problems,” she said. “By demonstrating the effectiveness of China’s domestic governance system, Beijing can advance its goal of leading global governance reform and promote the Chinese model as an option for developing countries to copy.”

If the regime successfully portrays itself handing the crisis effectively, “the CCP can further undermine the appeal of democracy and capitalism around the world.”

Internally, China is actively pushing its propaganda about the virus on its own citizens. U.S. national security adviser Robert O’Brien, during a speech at Washington-based think tank Heritage Foundation on March 11, said the regime had initially attempted to censor doctors who tried to speak about the outbreak, “so that word of this virus could not get out.”

In recent weeks, China has also pushed the narrative of a declining number of infections, and encouraged people to return to China. Li Lanjuan, a senior expert at China’s National Health Commission, told Chinese state media that if all goes well, China might be cleared of all new infections by March 20.

Gaffney said: “We should be ensuring that the people of China are … exposed to the truth. There’s a lot of talk now about reciprocity, especially with respect to journalists.”

The CCP is set to expel U.S. journalists based in China who work for The New York Times, The Wall Street Journal, and The Washington Post in retaliation for the Trump administration’s recent actions targeting Chinese state-run media outlets in the United States.

There are additional perceived benefits for the regime in focusing on America.

By targeting the United States, the CCP garners widespread attention and enables them to renege on some of their recent agreements with Washington on trade investment and intellectual property, according to Peter Huessy, president and founder of GeoStrategic Analysis, a defense and national security company in Potomac, Maryland.

Huessy told The Epoch Times that China’s disinformation has dire effects and makes it more difficult to protect the health and welfare of people not only the United States, but globally.

“The entire Chinese strategy is one of mass disinformation and misdirection,” he said. “While China pretends to be a responsible member of the international community, in reality, they are doing much to undermine the rule of law and human rights.”