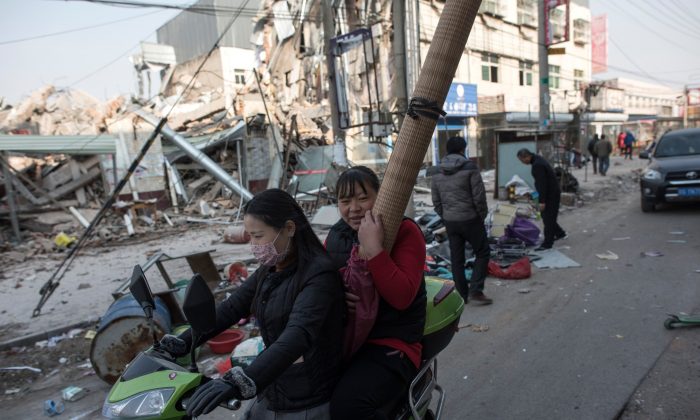 People leaving their homes on the outskirts of Beijing, after receiving eviction notices, in a photo taken on November 27, 2017. (Fred Dufour/AFP/Getty Images)
Social Issues

Beijing Eviction of ‘Low-Class’ Population Spreads to Other Chinese Cities

As Beijing authorities have begun evicting laborers, migrant workers, and other low-income residents out of the city’s suburbs in the past few weeks, the trend of clearing out what the Chinese regime calls the “low-class population” has spread to other cities. One expert believes the regime fears this population could be a threat to authorities during hard economic times.

Following a deadly fire that broke out in Daxing District, an area in Beijing where many factory workers live in low-rent apartments, the local authorities took advantage of the disaster—which happened in a building without proper fire safety measures—as an excuse to kick out residents.

On Nov. 29, the Hong Kong Economic Times reported that such eviction efforts have extended to Ningbo, a city on China’s eastern coast; as well as Guangzhou and Shenzhen, on China’s southern coast. Local authorities have begun demolishing buildings with for-rent apartments that they say violate building codes. The publication also obtained photos of eviction notices in Shenzhen’s Longhua District.

Meanwhile, the Beijing eviction has unexpectedly affected delivery companies. Many delivery workers have lost their homes in the eviction and are scrambling to find somewhere to live—and have not showed up for work as a result.

One deliveryman told The Epoch Times, “There aren’t enough workers right now. We need more delivery guys.” The deliveryman added that some delivery hubs have been demolished in the eviction sweep, with the authorities citing violation of construction codes.

Jiemian News, a Chinese publication, also reported that several major delivery service companies like SF Express, ZTO Express, and China Post (a state-owned firm) have had their warehouses and distribution centers inspected and shut down in recent days.

An owner of a Chinese online business, who wished to remain anonymous, told The Epoch Times that many of his customers have complained that they could not receive their packages. Many of his deliverymen are currently busy scouting for a home, so he has temporarily stopped taking orders from customers in the Beijing and surrounding Hebei Province area.

In recent days, there have been numerous posts from Guangzhou netizens on the Baidu search engine’s online forum, who said their packages are still missing. Online shopping is very popular among Chinese consumers; the annual Singles’ Day shopping festival on Nov. 11 generates billions of yuan in sales for China’s online retailers.

Delivery companies and retailers have inadvertently suffered as a result of mass evictions.

An economic scholar, Qin Weiping, told Voice of America his theory about why the Beijing authorities have carried out this eviction despite widespread public outcry—concern that has expressed itself in protests and rallies held by Chinese in Hong Kong and the United States.

Qin noted that many of the “low-class” population have low wages and don’t have social welfare, owing to China’s household registration, or “hukou” system, which limits the government benefits non-city-residents can enjoy. In China’s current unstable economy, these workers risk losing their livelihoods. Thus, the Chinese regime considers this group of people “unstable elements.”

“[The regime] is afraid they will start a riot, so it is clearing them out to put an end to things,” Qin told Voice of America.

“If a large group of them suddenly lose their jobs, and they cannot make a living, they will become a threat to the Chinese authorities,” he added.

Xiao Lusheng and Xu Jian contributed to this report.