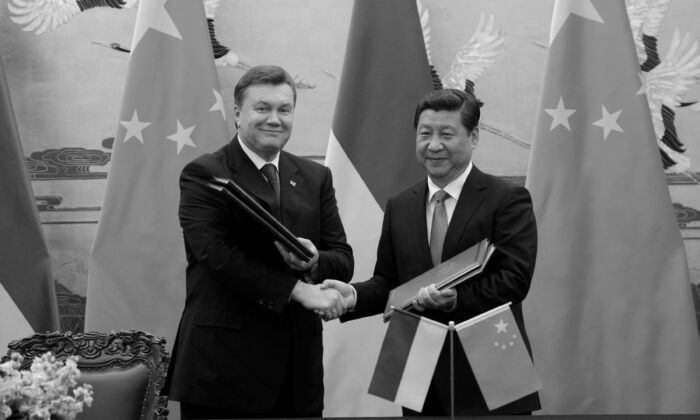 Five renowned historians from five top Chinese universities jointly issued a statement opposing Russia’s invasion of Ukraine on Feb. 26. However, 1.5 hours later, the statement was deleted and all posts from the social media account that made the post also disappeared.

In the past few days, more Chinese scholars have been reposting commitments made by the Chinese regime to Ukraine over the past few years, in which Beijing pledged to protect Kyiv because Ukraine has supported Beijing’s Belt and Road Initiative and other projects that the regime launched in the global community.

Some other scholars urged the regime to clarify its position on the Russia-Ukraine war, after Chinese students in Ukraine questioned whether Beijing supports Moscow’s invasion.

However, most of these and other related posts have also been taken offline, perhaps due to active censorship by the regime. The regime’s leadership also hasn’t addressed these question publicly.

On Feb. 25 during a daily press conference in Beijing, the spokesperson for China’s foreign ministry Wang Wenbin was asked repeatedly about Beijing’s attitude on Russia’s invasion of Ukraine.

Wang answered all questions with a similar answer, which was that “the sovereignty and territorial integrity of all countries should be respected and upheld.” He refused to recognize that the current conflict was sparked by Russia’s invasion, nor offer any words of support for Ukraine. He did not criticize Russia’s actions or say that China is considering possible sanctions.

On Feb. 26, the Chinese embassy in Ukraine warned all Chinese in the country to stay at home. The embassy described the fighting between Russians and Ukrainians on streets as “extreme behaviors,” and said that people were slandering and shooting each other due to extreme emotion.

In contrast to comments from the central government in Beijing, the embassy said they were in the process of organizing emergency flights to evacuate Chinese in Kyiv because the conditions had “deteriorated sharply.”

Two days earlier, the embassy had suggested to Chinese in Ukraine that they “hold the Chinese flag when driving their cars,” claiming that soldiers wouldn’t attack them if they saw the flags.

Chinese still in Ukraine then replied to the suggestions on Twitter that they actually didn’t dare to let others know they are Chinese, preferring to claim that they are Japanese or Korean when asked. A Twitter account for Peishiun Wu shared a video in which a Chinese student explained that a large number of mainland Chinese had posted on Chinese social media that they wanted Ukrainian men to be killed so they could marry Ukrainian women. These posts were reported by Ukrainian media, angering the Ukrainian people, leading to tensions for some Chinese in Ukraine.

“A permanent member of the United Nations, which is a big country and owns nuclear weapons, fired against its weak and fraternal state!” the historians said in the statement, referred to Russia’s invasion of Ukraine. “We feel deeply sad when we see Ukraine’s wounds.”

They criticized Russia for violating international rules and invading a sovereign state. They expressed support for the Ukrainian people as they defend their country, and worried that Russia’s invasion would cause humanitarian disaster across a large area, which won’t be limited to Ukraine or Europe.

“We strongly urge the Russian regime and President Vladimir Putin to stop the war, and solve the disputes by negotiation,” the historians stated.

However, Sun’s posts all disappeared at 7:30 p.m. Sun and the other professors haven’t commented on the disappearance of the posts since.

On Chinese social media platform Weibo, almost all posts relating to the Russia-Ukraine war on Feb. 26 were expressing support for Russia, with only a few posts of Russians protesting in their streets opposing the invasion.

The Epoch Times hasn’t been able to verify whether the Chinese regime is censoring anti-Russian posts.

On Feb. 26, Reuters quoted a Western diplomat in Beijing who said the Chinese regime’s “first reaction of denying there was an invasion was surprising to us … It is a total contradiction with their long-standing positions on sovereignty, territorial integrity, non-interference.”

The diplomat declined to be identified due to the sensitivity of the matter, according to Reuters.