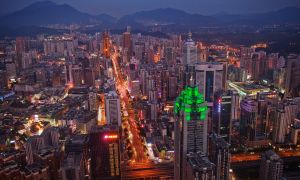 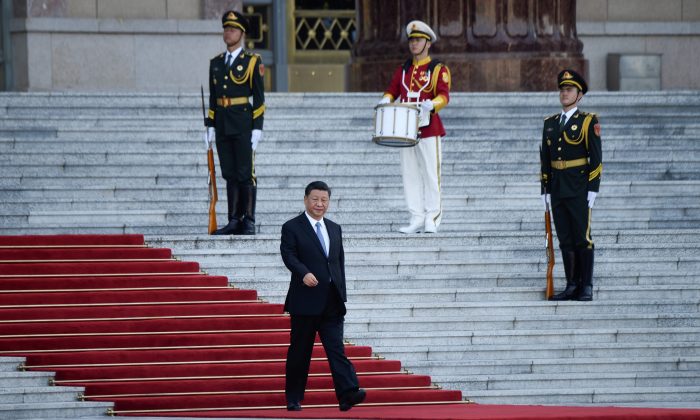 Chinese leader Xi Jinping is outside the Great Hall of the People in Beijing on July 31, 2019. (Wang Zhao/AFP/Getty Images)
Chinese Regime

Chinese leader Xi Jinping made a speech to the Chinese Communist Party’s (CCP) cadres on Sept. 3, in which he warned that the Party is experiencing “concentrated risks” in different facets, including the economy, politics, issues of sovereignty, and diplomacy.

On the same day at a press conference, the spokesperson of the Hong Kong and Macau Affairs Office (HKMAO), the highest office in Beijing for managing the two former European colonies, again criticized Hong Kong protesters, claiming that they were “separatists” who challenged China’s sovereignty.

Xi delivered the speech at the CCP’s Central Party School in Beijing, an academy for training young cadres.

State-run media Xinhua and the central government’s official website published Xi’s speech, in which he said all cadres must be able to fight and win against those who challenge the CCP’s “bottom lines.”

Xi’s words hinted at the Party’s admission that it’s experiencing crises on all fronts: “We are facing more and more complicated risks, even unimaginable stormy challenges … that would last a long period of time.”

He listed the different issues that present challenges to China’s “sovereignty” and “core interests,” including “the economy; politics; culture; society; the environment; defense and military; Hong Kong, Macau, Taiwan issues; diplomacy; and Party-building,” the latter referring to the Party’s methods for solidifying its presence in society.

He told cadres that they must “resolutely struggle” against the challenges and risks, which would increase over time.

Though Xi didn’t directly mention the ongoing Hong Kong protests against Beijing’s encroachment over the city’s affairs, the HKMAO made allusions to themes in Xi’s speech at a press conference held later that day, in which it spoke directly about the Hong Kong protests.

Yang Guang, spokesperson for the HKMAO, distinguished between peaceful protesters and what he called “uncompromising mobs,” defining “the violent protesters” as those being used by “foreign forces and Hong Kong separatists” who want to control Hong Kong.

Beijing has consistently pushed the narrative that foreign governments are fomenting unrest in Hong Kong, while accusing protesters of wanting to seek formal independence from mainland China. Thus far, local activists who advocate for independence have had limited presence in the protests.

He then accused Hongkongers of wanting to destroy the “one country, two systems” model, in which Hong Kong would be a part of China, even as the Chinese regime promised Hong Kong a high degree of autonomy after the territory was handed over from Britain in 1997.

When reporters asked Xu Luying, another HKMAO spokesperson, whether Beijing would support the Hong Kong government if it invokes a law that would grant the city’s top official broad powers during a state of emergency, he didn’t answer directly, but said, “At present, the most important and urgent task is to stop the violence and restore order.”

Xu added that whatever method the Hong Kong government chooses in suppressing the protests, the central government would support it.

When asked whether Beijing would consider sending troops into Hong Kong to quell protests, he again evaded answering directly, but said that China’s troops are key to protecting “one country, two systems.”

U.S.-based China affairs commentator Tang Jingyuan said that Xi’s speech suggests that there was instability within the Party, challenging his rule.

“Xi said in his speech that the first challenge is to the CCP’s ruling. The CCP’s ruling is Xi’s ruling,” Tang said in an interview with The Epoch Times on Sept. 3.

Party officials in charge of Hong Kong have long been associated with a faction that is loyal to former Party leader Jiang Zemin and opposes Xi’s rule, Tang said.

“In my eyes, it’s obvious that the HKMAO wants to use Xi’s ‘struggle’ speech to threaten Hongkongers,” Tang said, noting that the spokesperson’s comments at the press conference emphasized the peaceful versus “violent” protesters who deserved punishment, similar to the Party’s past political campaigns of pitting groups against each other.