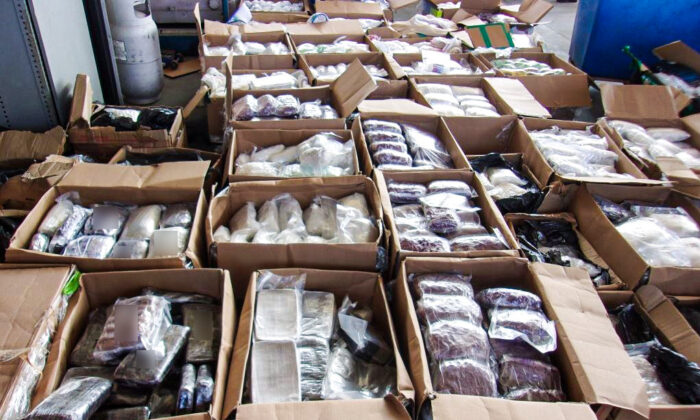 U.S. Customs and Border Protection officers at the Otay Mesa commercial facility seized more than 3,100 pounds of methamphetamine, fentanyl powder, fentanyl pills and heroin as part of the second largest methamphetamine bust along the southwest border in the history of the agency, based on information developed by DEA, working jointly with HSI on Oct. 9, 2020. (DEA)
Chinese Regime

Beijing has made only modest and half-hearted efforts toward curbing the flow of synthetic opioids such as fentanyl from manufacturers in China to foreign markets, where the drugs are causing record numbers of overdose deaths, particularly in the United States.

The communist regime is also continuing to place its geopolitical interests ahead of any effective reforms regarding the issue, according to a recent Brookings Institution report authored by Vanda Felbab-Brown, a senior fellow at the think tank. She has called opioids “the cause of the deadliest U.S. drug epidemic ever,” noting that drug overdose deaths soared to new levels between October 2020 and September 2021, with 104,288 Americans losing their lives. Of that number, opioids accounted for 78,388 deaths.

In Felbab-Brown’s analysis, an already grave opioid crisis took a turn toward even more severe lethality 10 years ago when synthetic opioids such as fentanyl displaced plant-based opioids and came to be used increasingly as ingredients of drug cocktails that also contain cocaine and methamphetamine.

For years, many of the more than 5,000 firms in China’s pharmaceutical industry have supplied fentanyl directly to the United States. The report described China’s chemical export sector as a poorly regulated shadow industry with between 160,000 and 400,000 manufacturers and distributors, many of them operating without licenses or hiding their activities behind shell companies.

Still, others hide the fentanyl they produce amid other products made in enormous volumes. Right up until 2019, brokers in China exported fentanyl to the United States, disregarding U.S. laws against the importation of their product.

The United States raised the issue with Beijing in the hope of bringing about much stricter oversight over the production and export of these drugs within China, and this effort did result in the regulation of fentanyl analogs and two fentanyl precursors in 2018 and 2019, according to the report.

But drug suppliers simply changed tack, routing shipments to cartels in Mexico, which then supply the drug to U.S. markets. The manufacturers and distributors didn’t abandon the supply of drugs to U.S. streets so much as find proxies to bring the narcotics there.

The report details how, even now, some Chinese dealers tailor their approach specifically for Mexican cartels. Felbab-Brown cited investigative research by Washington-based nonprofit C4ADS revealing how Chinese sellers bundle fentanyl and meth precursors, along with cocaine fillers, in Spanish-language ads and tout the ability of the bundled drugs to slip through customs in Mexico.

In the face of U.S. pressure, Beijing has insisted that it can do only so much to curb nonscheduled sales of meth and fentanyl precursors to drug cartels and has rejected blame for the U.S. opioid epidemic.

The fact that Chinese criminal groups are less likely to murder their real or perceived foes than some Latin American cartels gives Beijing a further excuse for leniency, except in those relatively rare cases where Chinese criminal syndicates act directly counter to the interests of Beijing’s ruling elite, according to the report.

Beijing’s stance is that U.S. social problems are to blame for the crisis, and it shouldn’t be laid at the door of China, a nation that it says has shown “benevolence” and cooperation in anti-drug efforts.

Yet heightened tensions between Washington and Beijing in recent years have meant the regime has withheld the kind of assistance that is really needed to stop the supply of fentanyl to U.S. cities. In recent years, things have gotten worse, not better, even as increased attention has focused on the crisis and the role of overseas suppliers.

Up until 2018, Chinese police acted on U.S. tips and arrested Chinese fentanyl dealers. But Chinese authorities haven’t acted on intelligence or indictments from U.S. officials since that time. Cooperation between the law enforcement agencies of China and Mexico over fentanyl trafficking and the trade of precursor agents is next to nonexistent.

“China’s counternarcotics cooperation with the U.S. has been subordinated to the overall deteriorated geostrategic relationship between the two countries,” the report reads. “Indeed, without significant warming of the overall U.S.–China relationship, China is unlikely to intensify its anti-drug cooperation with the United States. U.S. punitive measures, such as sanctions and drug indictments, are unlikely to change that.”

Political frictions have similarly hampered cooperation between Chinese and Australian agencies, according to the report.

It describes China as “the principal supplier” of precursor chemicals used in methamphetamine production in both East Asia and Mexico. Between the 1990s and the mid-2010s, meth produced in southern China went both to domestic markets and to East Asia and Australia, the report states. Here, too, increased calls for action at the diplomatic level have had only a partial effect on the global drug trade.

“At first Beijing was defensive and dismissive about any claims that China was the supply source of Australia’s meth epidemic. But as time passed, it grew willing to cooperate with Canberra,” the report reads.

The formation of Task Force Blaze, a Sino-Australian organization based in China’s Guangdong Province, in November 2015 led to the seizure of shipments of meth from China to Australia and to 130 arrests in its first year of operation alone. But this didn’t end the flow of meth precursors and pre-precursors from China to drug producers in Burma (Myanmar) and other nations.

While the supply chain looks different on the surface, the prevalence of Chinese manufacturers and suppliers is as marked as before.

The Brookings report suggests that the United States can take a number of steps to counter China’s role in the narcotics trade.

Emphasizing China’s interest in nipping domestic opioid consumption in the bud and encouraging Beijing to ramp up its anti-money laundering efforts can have no ill effects. But the report suggests that the long-term effects of such approaches will be slight.

What may make more of a difference is the implementation of self-regulatory mechanisms for chemical and pharmaceutical industries on a global level. Such an approach may have an effect on the availability of precursor agents for drug traffickers. More cooperation among the anti-trafficking agencies of different nations is also needed, according to the report.

As the United States grapples with its opioid crisis and looks urgently for ways to stem the number of deaths caused by the crisis, one of the worst mistakes it could make would be to offer Beijing an enormous prize in exchange for cracking down on China-based drug trafficking, according to Jonathan P. Caulkins, a professor at Carnegie Mellon University’s Heinz College and expert on the global drug trade.

In Caulkins’s analysis, nothing about the fentanyl trade is really unique to China, given the relative ease with which precursor agents for synthetic drugs can be produced anywhere. For a smaller and impoverished country such as Bolivia or Afghanistan, the drug trade might be vital to its livelihood, but even now, the money that China’s pharmaceutical companies derive from the illegal drug trade is relatively insignificant in the scheme of things.

“The total dollar value of Chinese exports of fentanyl, or precursors, is almost certainly less than $25 million per year and possibly more like $10 million,” Caulkins said. “They’re getting a very tiny share of the value. Most of the value is created further down the supply chain, not in China.

“Given that China is the second-biggest economy in the world, and the Chinese pharmaceutical industry is gigantic, this is more of a round-off figure for them, a tiny activity in terms of dollars and the number of people involved.”

Caulkins said it may be the case that Beijing could clamp down on the illicit trade more effectively if it chose to do so, but it’s well aware of the severity of the opioid crisis in the United States and the potential use of the crisis to gain leverage and extract concessions in return for taking action.

“China understands that this is a problem for America, and they want to trick or dupe the United States into trading something,” he said. “Many people here think about this issue in a way that’s not informed by economics and markets. My biggest worry is that the United States will make the catastrophic error of trading something diplomatically important in exchange for China’s cooperation.”

For Washington to adopt a policy on Taiwan more in line with Beijing’s preferences would be a huge mistake, he said, because the United States would have given up something important.

Even if Beijing does honor a promise to take tougher action on opioids, another player would likely step in and continue the supply of fentanyl to the U.S. streets, Caulkins said. Hence the United States needs to find solutions that don’t play into Beijing’s hands and end up simply turning the trade over to new traffickers.