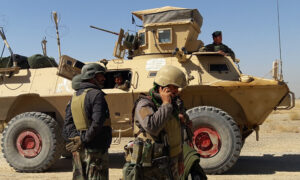 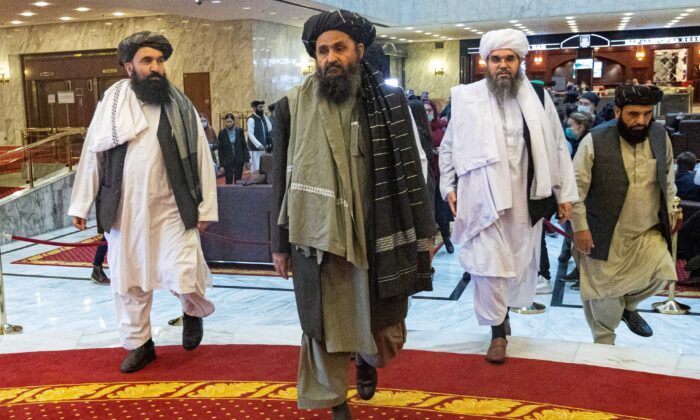 Taliban co-founder Mullah Abdul Ghani Baradar (C) and other members of the Taliban delegation arrive to attend an international conference on Afghanistan over the peaceful solution to the conflict in Moscow on March 18, 2021. (Alexander Zemlianichenko/Pool/AFP via Getty Images)
Chinese Regime

Beijing and the Taliban Are Friends, Brags Global Times Editor

As the United States withdraws its remaining troops from Afghanistan, the Chinese communist regime is starting to make moves to expand its influence in the war-torn country.

On July 6, U.S. Central Command announced that the U.S. troop withdrawal from Afghanistan was more than 90 percent complete. The Taliban then began to attack and capture territory. At the same time, the Taliban said publicly that it sees China “as a friend” for the reconstruction of Afghanistan.

Observers believe that Beijing is ready to expand its influence into the country through the regime’s Belt and Road Initiative to fill the void left by the departure of the United States and NATO troops.

On July 9, Hu Xijin, the editor-in-chief of the ruling Chinese Communist Party (CCP) mouthpiece media “Global Times,” published three consecutive posts on Chinese social media claiming that the United States could not handle the Taliban and that the U.S. troop withdrawal showed it was “being forced to flee in a hurry.”

Hu highlighted the Taliban’s statement and boasted, “Taliban even considers China a friend. Now you know how steady and powerful China is in diplomacy!”

Except for some pro-communist internet users and the regime’s paid internet commentators, known as the “Fifty Cent Gang,” most Chinese netizens were outraged by Hu’s posts and condemned them on China’s social media site Weibo.

One said of Hu and the CCP’s mouthpiece, “People seek out their kind. Take a look at China’s friends from North Korea, Iran, Belarus, to the Taliban.”

Another post reads, “Don’t you know that the Taliban is a fundamentalist terrorist group that has blown up UNESCO World Heritage Site the Buddha of Bamiyan, kidnapped and killed hostages, and committed suicide bombings? The Chinese regime not only has maintained stable relationships with more than one terrorist organization, but now has even elevated the relationship with the Taliban to ‘friends.’ Even Gaddafi couldn’t achieve this.”

Others reflected, “Why has China become the enemy of most Western developed countries? How should we self-reflect on this?”

This is not the first time that the Taliban and the Chinese communist regime have shown their “friendship.”

On June 20, 2019, China’s Ministry of Foreign Affairs confirmed that Ghani Baradar, the director of the Afghan Taliban political office in Doha, and several of his assistants visited China for a few days. The Taliban delegation and Chinese officials exchanged views on issues such as “progress towards peace and anti-terrorism,” according to the press release.

The news back then also caused controversy. Chinese netizens mocked the CCP for finally disclosing its unspoken relationship with the Taliban and exposing itself as the “axis of evil.” Another netizen said, “The Taliban visits Beijing, finally connected with the mothership.”