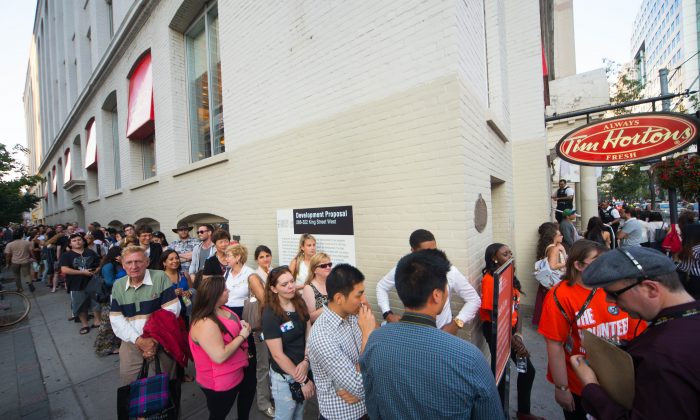 People line up around the block to see a film at Princess of Wales Theatre on Tuesday. Media can skip lines like this and take in special screenings of TIFF films. (Matthew Little/Epoch Times)
Canada

Behind the Red Carpet at TIFF

TORONTO—Brad Pitt is in this story.

It’s important to mention, because if there is one thing journalists learn at the Toronto International Film Festival, it is that celebrity matters. Great films are a big deal here, but so is what Nicole Kidman wore on the red carpet.

Having media credentials for TIFF opens a door to the world of the beautiful people, where the famous wander about and movie moguls peruse films to screen in their country.

It’s a fascinating experience that begins when one of the “orange army”—festival volunteers in pumpkin-coloured t-shirts—takes out a laser scanner to verify your pass to the inner chambers of North America’s largest film festival.

Even picking up that pass at TIFF media and industry headquarters at the luxurious Hyatt Regency Hotel in downtown Toronto is an adventure.

It’s clear from the start that the press has a special role at TIFF. We get preferential access to all films, additional support services, and a private room where we can watch films we missed on giant iMacs.

We also get a special line to pick up our accreditation—the pass that opens all doors. The queue formed by industry folk like publicists and purchasers runs most of the significantly sized ball room. Media have a much, much shorter line.

The people in line in front of me discuss stars they hope to sit down with for their U.S. television show. A woman waiting off to the side is an assistant to a producer for the largest entertainment show in North America, probably the world—you know the one. She informs me that if they don’t get first interview position on the red carpet, they leave.

That point didn’t quite make sense at the time, but did later when I made my own red carpet debut. We’ll get into the red carpet pecking order shortly.

Some publicists beside me talk about their work promoting “Dallas Buyers Club” starring Matthew McConaughey and Jennifer Garner.

Once you get the pass, you can wander around the two large ballrooms on the Hyatt’s second floor where industry people from around the world wrangle deals for their films

At the dozens, maybe hundreds, of tables scattered about, filmmakers try to work out distribution deals, discussing finer issues like translation and promotion.

You overhear lines that sound oddly glamorous in real life, like “I read the script.” “It’s in post-production now.” “We’re holding out for a better distribution deal.”

Many countries have government-sponsored supports for their film industry. There are sections here for films from France, Sweden, Japan, and elsewhere, with banners lining the walls touting those works. It’s a point of national pride to have a movie make it to TIFF.

For film fiends, TIFF is a dangerously tempting international smorgasbord. If you have media accreditation, you can walk past block-long lines and gorge yourself on exquisite cinema free of charge.

Each film has two sets of screenings: one for the public, and one for the press and industry folks who buy, distribute, and show films.

But like any feast, there are consequences to over indulgence. TIFF expects accredited journalists to write about what they watch, and those laser scanners mean they know every film you see and every restricted area you access.

There are films of every budget and type, from auteur flicks with claustrophobic settings and anemic plots to brilliantly acted and cerebral character stories. There are star-studded action flicks destined to be Hollywood blockbusters and foreign films that hide the names of their cast and crew to avoid jail and possibly execution.

It’s impossible to see more than a fraction, with as many as 19 great films screening at a time. There are hundreds of films, not to mention press conferences, parties, and panel discussions with some of the biggest names in the business.

Just deciding what to do the next day can take hours. It’s easy to follow the crowd to the big Hollywood premieres, but perusing TIFF’s massive catalogue and finding those lesser known gems takes time and effort.

Those who follow the crowd and hit up the Hollywood premieres often attend the red carpet gala held the next day. Hollywood’s brightest stars and most esteemed directors make a splash there and present an irresistible lure for the press.

Unfortunately, there is rarely enough room to fit all the journalists clamouring to interview Brad Pitt or Nicole Kidman.

The list says who gets in, who doesn’t, and where they rank on the red carpet.

It’s one of those times in life where you know exactly where you stand, because that line of press stretched down the red carpet is numbered. The lower the number, the closer you are to the front of the line.

Print journalists don’t count for much here. At the red carpet for “12 Years a Slave,” crammed between a gate and an elevator at the very end, were print reporters from the Globe and Mail, Sun, and Toronto Life, and outlets from abroad crawling over each other trying to get a microphone in someone’s face, or a close-up photo of someone people will recognize.

It matters where you are because there is never enough time for the stars to talk to everyone. The public premiere starts maybe an hour or more after stars begin arriving on the red carpet and they are expected to be inside.

The further down the line you are, the more likely publicists will tell you to ask only one question, and the big stars will often be hustled past without stopping to say anything. When Hugh Jackman finally finished with the TV cameras at “Prisoners” premiere, his handlers rushed him past the print reporters like they were assassins.

“Walk, just walk,” one urged, pushing him along.

Brad Pitt is a notable exception. At the “12 Years a Slave” red carpet, he took several questions, giving reporters the precious words they needed to build a story. It’s not much, but on the gritty end of the red carpet, it counts for a lot.

For the fans outside who stand for hours hoping just to get a glimpse of celebrities and maybe an autograph, it also counts for a lot.

Word on the street outside red carpets is that Pitt is “the nicest guy.” Fans said he spoke with people one by one, even those three for four rows back, signing autographs and taking pictures for a “really long time.”