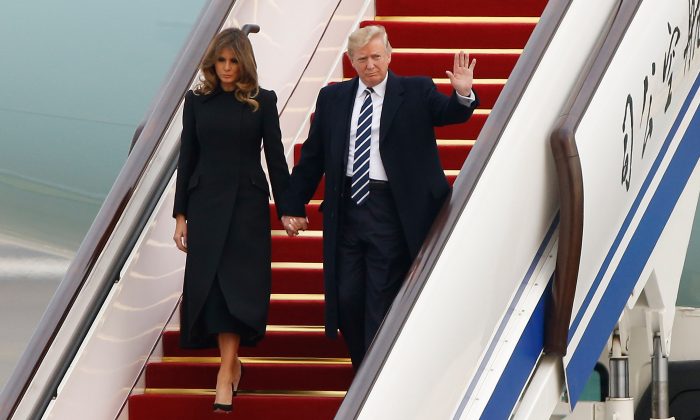 Beyond the deal-signings and handshakes of President Donald Trump’s trip to China are simmering conflicts that have few win-win options.

Accompanying Trump to Beijing are 29 U.S. business leaders who will bask in the friendly atmosphere as Trump and Chinese leader Xi Jinping wrap their flags around the bounty of pre-negotiated business deals.

The real benefit of the trip, however, is the face-to-face meetings between Trump and Xi. Those meetings will help each leader to assess the other’s resolve and avoid miscalculations over divisive issues.

The visit to China comes halfway through Trump’s two-week East Asia trip, which began with stops in Japan and South Korea and will continue with trips to Vietnam and the Philippines.

According to a U.S. senior administration official addressing reporters in Japan on Nov. 5, the trip has three overriding objectives: to strengthen international resolve to denuclearize North Korea, to promote a free and open Indo-Pacific region, and to advance American prosperity.

China’s cooperation is key for moving forward on all three objectives, but on each of these, the United States and China have very different perspectives.

Trump has made more progress than any previous president at getting China to support and enforce sanctions on North Korea.

But the two nations have fundamentally different views of the conflict and how to resolve it.

The Chinese regime is focused on staving off war on the Korean Peninsula and wants the United States to back off from any threat of force, which would essentially leave North Korea free to pursue its nuclear weapons program.

Beijing also wants to keep further batteries of U.S. anti-ballistic missiles and radars from being deployed in South Korea, and prevent a trilateral military alliance between Japan, South Korea, and the United States.

Beijing scored a victory on those two fronts last week, when Xi resolved a year-long standoff with South Korea by getting President Moon Jae-in to agree to his “three no’s”: no additional THAAD deployments, no trilateral military alliance, and no participation in an integrated missile defense.

The Chinese regime wants to keep North Korea as a buffer between its territory and U.S.-allied South Korea. The United States wants the North to be absorbed by the democratic and prosperous South.

In spite of these differences, though, there may be real common ground on North Korea.

For decades, the Chinese regime has promoted North Korea’s military, including the smaller nation’s missile and nuclear programs. According to the senior administration official, the United States believes China now views North Korea as a severe strategic liability.

Trump will be asking Xi for China to go beyond U.N.-approved sanctions in denying the North Korean regime the economic resources it needs to sustain itself.

There are also opposing views on the South China Sea, where the Chinese regime asserts historic rights to a huge swath of ocean that extends into large parts of the exclusive economic zones of Brunei, Indonesia, Malaysia, the Philippines, Taiwan, and Vietnam.

That policy is deeply important to the trading nations that share the sea and others that trade through it, including the United States.

“The United States is an Indo-Pacific power. We’ve been one since the dawn of our republic,” the senior administration official said.

“Our security and our prosperity depend on the United States maintaining access for free flow of commerce to this region,” said the official.

Where the United States wants to maintain open waters, China hopes to become the deciding power in the Asia-Pacific.

However, that goal, and the entire Chinese economy, requires a steady stream of U.S. dollars.

This is where the United States still has significant leverage, which experts say is critical to the third objective of Trump’s trip: advancing America’s prosperity. This goal, they say, is where the two nations come into a more difficult contest.

On the surface, Trump and Xi will celebrate trade deals that will give the appearance of cooperation between the two economic giants.

In truth, however, the United States must recognize that a communist China cannot be an ally, according to Derek Scissors, a resident scholar at the American Enterprise Institute.

“We are in fundamental conflict with the Chinese, and it needs to be acknowledged,” said Scissors.

The response of the United States to date? Pathetic, said Scissors.

Conventional wisdom holds that the United States will bend on trade issues to gain the Chinese regime’s help with North Korea, but that is not how the Trump administration was talking before the summit in Beijing.

“I don’t anticipate trade-offs,” the U.S. senior administration official said. “The United States isn’t going to barter away our interests on the trade front in order to make gains doing what the entire world has, more or less, obligated itself to do, and that is to contain and confront the threat from North Korea.”

The United States has some major advantages in any negotiations with China, according to Gordon Chang, the author of “The Coming Collapse of China.” These include leveraging access to the U.S. economy and to the U.S. financial system.

The day before Trump left on his Asia trip, the United States banned the Chinese Bank of Dandong from access to the U.S. financial system because it was laundering money for the North Koreans.

This was read by many as a shot across the bow of the Chinese, warning them of the need to cooperate on North Korea and of the vulnerability of the Chinese financial system.

Severing Chinese banks from the U.S. financial system could kill them, said Chang.

“If you put the Chinese banks out of business, you rock the Chinese financial system,” he said.

Scissors said that without access to U.S. dollars, China could not make international transactions to buy oil and other critical resources.

In negotiations with Xi, Trump will need to convey that he has the political will to take actions that will make China pay if it doesn’t change its one-sided trade practices.

Trump’s pledge to rebalance trade between the United States and China comes with a potent risk to the Chinese regime, said Scissors.

Scissors said sanctions would need to encompass entire sectors of the Chinese economy, such as all telecom companies, to be effective. Sanctions might even need to take on multiple sectors.

“If we sanction multiple sectors, then we are really talking about something painful,” Scissors said.

The more devastating option would be to rapidly rebalance trade through import certificates, a mechanism proposed by investor Warren Buffett in 2003.

For every dollar of product a company exports, they get a certificate that allows them to import an equal dollar amount of goods. They can also sell the certificate to someone else who needs to import goods.

The policy could rapidly rebalance the U.S. deficit with China—which accounted for nearly half of the $737 billion total U.S. trade deficit in goods in 2016—and dissolve China’s U.S. dollar reserves.

“The Chinese simply can’t afford that right now,” said Scissors. “There is simply no Chinese equivalent.”

“The Chinese can hurt several large American companies and probably the American stock market, but they cannot threaten to destabilize the U.S. financial system the same way the U.S. can do to China,” he said.

Chang said, “If you push the Chinese economy over the edge, the Chinese political system won’t be very far behind. So President Trump can put Xi Jinping out of business.”