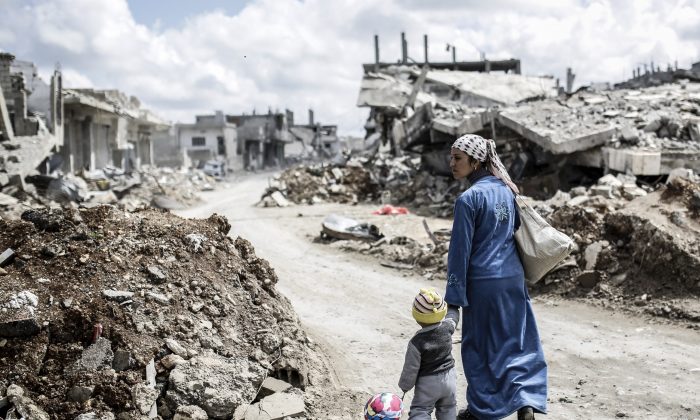 A Kurdish Syrian woman walks with her child past the ruins of the town of Kobane after Kurdish and allied forces drove out ISIS extremists on March 25, 2015, in Syria. (YASIN AKGUL/AFP/Getty Images)
Opinion

What started as a civil war in Syria nearly five years ago has now evolved into an international crisis unmatched by any other since World War II. The global community now has a solemn obligation to end this humanitarian disaster, but it cannot do so unless all the powers affected by the conflict set aside their differences in order to end the suffering of millions of Syrians. The UNGA annual meeting, which is now in progress, offers the United States, Russia, and Iran a momentous opportunity to come up with a solution, which is absolutely within reach if they only will it.

The search for a solution to Syria’s civil war and the unfolding tragedy of the Syrian refugees can be found only by defeating ISIS while simultaneously formulating a political solution to prevent the complete disintegration of the country.

To achieve this goal, it is necessary to engage all the parties vested in Syria, especially the United States, Russia, Iran, and the Assad government, in this process, whose full cooperation is central to a durable solution.

No solution, however, can be found without first establishing the historical perspective and the root causes that gave rise to this catastrophe. Sadly, the countries which must now cooperate—mainly the United States, Russia, and Iran—are largely the culprits behind this crisis, albeit for different strategic reasons.

The 2003 Iraq War, and the U.S. policy that fueled it, shattered the relative stability of the Middle East. The war instigated the Sunni-Shiite conflict, destroyed the U.S. decade-long mutual containment strategy to prevent either Iran or Iraq from gaining the upper hand, allowed Iran to play a dominant role in Iraq, made Iraq the battleground between Sunnis and Shiites, and gave rise to ISIS as early as 2005.

Assad’s brutal crushing of the 2011 peaceful demonstration in Daraa which led to the civil war, and the violence in Iraq and Syria, enabled the convergence of scores of extremist groups into Syria. This includes al-Qaeda, Jabhat al-Nusra, and the formal rise of ISIS, further intensifying the civil war and creating a refugee crisis of historic proportions.

Subsequent to President Bush’s disastrous misadventure in Iraq, President Obama swung the pendulum of U.S. policy in the opposite direction. He replaced President Bush’s bellicose and misguided policy with a policy infused with vacillation and aloofness laden with intellectual treatises, far removed from the reality of the region, while forgetting the indispensable global role of the United States in conflict resolution.

Conversely, Russia’s President Putin demonstrated all along a clear and decisive policy in support of his ally President Assad. Putin was and remains determined to safeguard Russia’s interests in Syria by preserving the Assad regime, which remains central to his strategy. As he has done in the past, Putin will continue to block any solution to the Syrian crisis unless it is done on his terms.

He disagrees with the United States that Russia’s deeper involvement in Syria could escalate the conflict. Sensing a lack of American resolve and a sound policy to address the Syrian crisis, Putin proceeded by sending more arms, trainers, and building a new major air base, further augmenting Russia’s presence in Syria.

Putin’s message to the United States is that Russia will be assertive in the Middle East and will do whatever it takes to prop up Assad’s weakened hold on power while strengthening Moscow’s hands in any future negotiations with the United States to resolve the conflict.

For Iran, maintaining its influence in Syria remains the central requisite to protect its larger goal of being the dominant power in the Gulf, as Syria provides the lynchpin to Tehran’s crescent extending from the Gulf to the Mediterranean. Iran continues to supply Assad with massive military support replete with advisers, intelligence, and ground troops.

Iran is also in a position to prevent any solution to Syria’s civil war unless its strategic interest is guarded. Regardless of the extent of the destruction that has been inflicted in Syria, Tehran will continue to support Assad to the last Syrian soldier.

Although Assad’s staying power depends largely on the continuing support of Iran and Russia, he remains, contrary to the views still held in Washington, an important part of any solution.

Assad also knows that although Iran and Russia can take many unilateral actions in Syria, they cannot defy the United States with complete impunity, especially because the United States is leading a coalition made out of many states that are battling ISIS, which serves Russia’s, Iran’s, and Assad’s own interests.

As such, Assad’s importance and role will diminish once ISIS is defeated, and since he irreversibly lost much of his international legitimacy, he will become dispensable in the eyes of Russia and Iran once the two countries secure their interests in Syria post-Assad.

Any keen observer of the turmoil in Syria suggests that following the defeat of ISIS there is only a political solution to end the civil war in Syria, and the United States has no choice but to work with Russia and Iran.

Thus, to preserve America’s leading role, President Obama must include Russia and Iran in the search for a solution and develop a new strategy that the U.S. regional allies can also embrace:

First, developing a comprehensive strategy to defeat ISIS will have to include the introduction of ground troops. Every military strategist contends that ISIS cannot be destroyed from the air alone, and Iraqi troops cannot defeat ISIS without significant additional ground troops from other countries.

Certainly this is easier said than done, but the ultimate goal of defeating ISIS serves all parties’ interests, which overrides their differences. (Incidentally, it has been reported that Iranian and Russian troops are already fighting against the rebels and ISIS.)

Second, as the fight against ISIS continues, the effort of ending the civil war must simultaneously and vigorously be pursued by all the powers involved. The United States can certainly exert pressure on the rebels, while Russia and Iran can force Assad to end his hostilities.

Third, all the powers involved must work together to help form a transitional (five to seven years) representative government. Since neither Russia nor Iran would abandon Assad unless they secure their continuing interests and influence in Syria, Assad will have to initially be included. That said, the makeup of the government must reflect the demographic composition of the country, including the Alawites.

Fourth, the United States can reach an agreement with Russia and Iran that would require Assad to retire ‘voluntarily’ after one or a maximum of two years and be provided safe passage to any country that will accept him along with his top political, military, and internal security officials who have blood on their hands.

Fifth, to avoid the mistakes the United States made in Iraq, the current Syrian bureaucracy, internal security, and military must remain in place to prevent new chaotic developments that could potentially erupt. Indeed, many extremist groups who have their own agenda will not accept any new political order and will do whatever it takes to torpedo it.

Sixth, a comprehensive plan should be developed to effectively deal with the massive refugee problem. The solution cannot be found based on how many refugees the European community and the United States can absorb. Whether they admit three or four hundred thousand refugees, it pales in comparison to the nearly five million refugees that would seek to resettle back in their own country.

To that end, the idea of a no-fly zone must now be revived and seriously considered so that the continuing influx of refugees can find temporary homes, lifting some of the burden off Jordan, Turkey, and Lebanon, who have collectively absorbed more than four million refugees.

It is time for the international community to live up to its moral obligation to resettle the Syrian refugees and raise the amount of money necessary, which is a tiny fraction of what is being spent on militaries (the Iraq war alone cost in the vicinity of $2 trillion).

While all countries’ first obligation is to safeguard their national interests, Russia, Iran, the United States, EU, and the Arab states must realize that the continuing destruction of Syria, the growing number of deaths which has exceeded 300,000, the displacement of more than 12 million Syrians, and the unavoidable spillover to neighboring countries will eventually come back to haunt them if it has not already.

This is not a perfect formula and many would think it is based on unrealistic assumptions far beyond the realm of possibilities. I agree, it is not perfect and there is no formula that will fully satisfy all the players involved. I must ask though, what is the alternative? Is there a viable solution that will preclude Russia and Iran?

Russia and Iran are deeply embedded in Syria; they cannot be dislodged and will always remain a player in shaping Syria’s future. The United States has little choice but to accept this simple reality.

President Obama should use his speech at the UNGA to articulate a new policy to bring an end to Syria’s civil war and a new initiative to ending the plight of the Syrian refugees. He will not be able to do so, however, without inviting the full support and cooperation of Russia and Iran, whose leaders are likely to focus on the Syrian crisis during their speeches to the General Assembly.

That said, a resolution to the civil war in Syria offers great dividends as it will thwart many of the intractable conflicts in the Middle East and open the door for further collaboration between Russia and the United States to settle their differences concerning the Ukraine, and the United States and Iran in relation to various conflicts in the region.

This will also begin a process of mitigating the hostilities between traditional enemies in the region from which the United States and its allies can greatly benefit, while ending the gravest tragedy of the last seven decades.