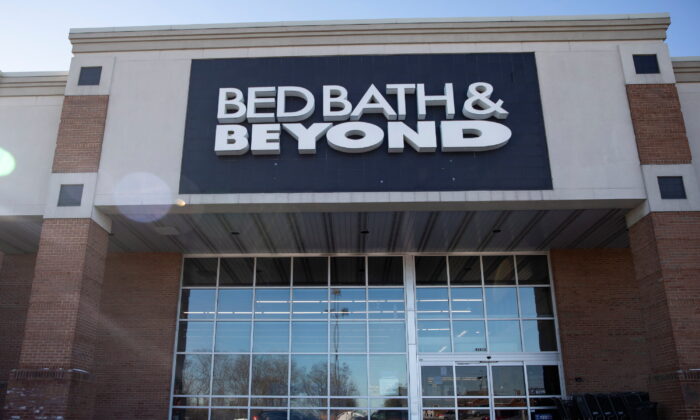 Bed Bath & Beyond to Close 150 Stores, While Laying Off 20 Percent of Its Employees

The home supply retail giant Bed Bath & Beyond is on the verge of bankruptcy and collapse, as it announces the closure of more of its stores, massive layoffs, and more stock offerings.

The retailer announced on Aug. 31, as part of a “strategic update,” that it will lay off approximately 20 percent of its corporate workforce, close around 150 of its “lower producing” store locations, and remove some of its in-house brands.

BBNY also said it secured a critical loan of more than $500 million to shore up its ailing finances and to expand its $1.13 billion asset-backed revolving credit facility and a new $375 million “first-in-last-out” facility.

After the last few years of annual declines, due to slumping sales and supply chain issues, the home goods company is trying to remain solvent and avoid bankruptcy by downsizing.

The retailer fired its CEO, Mark Tritton, back in June, after only three years at the company, when he was brought on board from its retail rival, Target, to redefine and improve the brand.

Tritton was responsible for launching and expanding Target’s own in-store brands, which helped revive that company, but his strategy failed to work with the customer base at BBNY.

Board member Sue Gove took over as interim CEO from Tritton, and the company is still searching for a permanent CEO.

Chief Operating Officer John Hartmann will be leaving the company and will not be replaced.

The company admitted losing hundreds of millions of dollars in sales in the fourth quarter of 2021, due to lack of items in stock.

Shares of the company fell by nearly a quarter after the restructuring announcement, which has been labeled as a volatile “meme stock” in recent years.

The store chain also admitted that sales at its many of its stores plunged 26 percent for the three-month period ended on Aug. 27.

GameStop CEO Ryan Cohen, one of BBNY’s key investors, dumped almost his entire stake in the company two weeks ago, after a report that some important suppliers halted shipments due to unpaid bills, causing the value of the company to crash.

Cohen told the Securities and Exchange Commission (SEC), on Aug. 17, that he would sell up to 7.78 million shares of BBNY stock, as well as more than 16,000 call options that gave his private investment firm the right to buy additional shares.

Executives on a call with analysts before the announcement said to CNN that they would change their sales approach by not returning to its “stock-it-high” merchandising strategy.

They also told CNN that national major brands will take more prominence over its own store brands and that three of their brands will eliminated, including Studio 3B, Haven, and Wild Sage.

Mara Sirhal, BBNY’s executive vice president and head of its brand division, said on the call that customers surveyed said that “national brands are an important part of their shopping experience with us,”  and that they will be working closely on it with their suppliers.

In order to boost profit margins, BBNY will further promote its new Welcome Rewards program, which has seen strong growth, with its five million members.

Recent membership in the program has risen by 20 percent, according to the company.

The company said it has new strategies on how to accelerate the growth of its Buy Buy Baby stores, with a focus on its digital and registry platforms, an expansion of its age range, and improvements on its products and services.

BBNY, in a regulatory SEC filing, said that it would offer up to 12 million shares of common stock, which it plans to use to pay down its debt, among other purposes.

The retailer in recent years has lost more of its base to rival chains such as Target, while online companies like Amazon.com have cut into its home market with cheaper prices.

Also, an attempt by BBNY to appear “woke” last year backfired, causing many conservative customers to boycott the brand.

BBNY hopes that the new structural changes will cut sales and administrative expenses by approximately $250 million for the fiscal year.

The company’s revised forecast now anticipates $250 million in planned capital expenditures for fiscal 2022, compared to the previous estimate of $400 million.

BBNY is expected to report its final results next month.

The Epoch Times wrote to Bed Bath & Beyond for further comment.