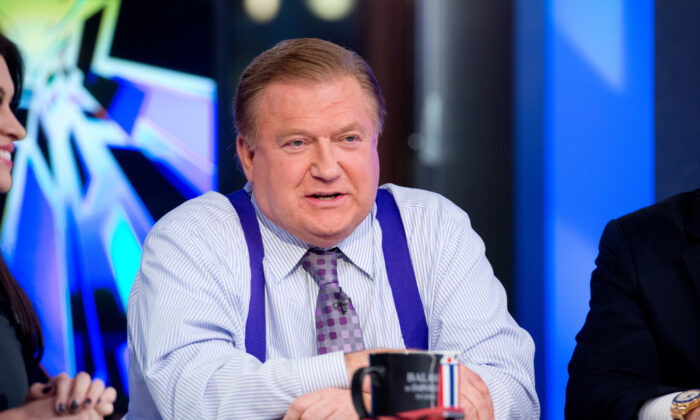 Co-host Bob Beckel attends Fox News’ “The Five” at Fox Studios on Feb. 26, 2014, in New York City. Beckel, who ran Walter Mondale’s 1984 presidential campaign and co-hosted more than 700 episodes of “The Five,” has died. He was 73. (Noam Galai/Getty Images)
Viewpoints

Beckel and Me: An Odd Couple

As often happens among the political class in Washington, we met on television debating each other. I liked him immediately, despite our political and even religious differences.

Bob Beckel and I became friends and eventually more than friends. Twenty years ago, after debating a long-forgotten subject on Fox News Channel, we came back to the green room where I noticed a streak of sadness in his face. “Are you OK, Bob?” I asked. In what he would later describe as a rare moment of transparency, he said, “No, I’m not,” and began to cry. I had never seen him like this. He told me his personal life had fallen apart and he was receiving death threats after being accused of trying to flip electors to Al Gore following the 2000 presidential contest. He had denied the accusation.

I told him, “You need Jesus, who will change your life.” He said he had tried everything else and it hadn’t worked, so he was open.

After giving him a Bible and a book titled “Evidence that Demands a Verdict,” Bob started coming to church with me and came to believe what Scripture says about our need for redemption and a Redeemer.

What followed was a unique bond that lasted until the day he died last week.

In the early 2000s, we decided to write a column together called “Common Ground” in which we presented our positions on certain issues and then tried to reach agreement at some level. USA Today immediately bought the idea and we were featured on its op-ed page for 10 years. We also wrote a book together with the same title.

It was on the lecture circuit where I think we had our biggest influence. Bob spoke openly about his history with alcoholism and his genuineness endeared him to even conservative audiences.

We traveled together, ate together, and got to know each other and our respective “stories” in ways that rarely happen in Washington these days. At the end of our presentation, I would say that I rejected the notion that Bob was on “the other side.” Both of our fathers were in World War II. They weren’t fighting for or against Franklin Roosevelt, but to preserve an ideal. America has always been an idea in search of the ideal. If we want to put someone on the other side, make them external enemies like the Ayatollah in Iran, or the leadership in China and Russia. Let’s not destroy each other. We are fellow Americans.

Bob would then get up and say how I had saved his life and introduced him to God and other nice things. We embraced, prompting wild cheers from the audience. People would say, “Why can’t we see more of this in Washington?” It helped that neither of us were interested in running for office, which would mean having to raise money and say things to satisfy various interest groups.

At his memorial service next week there will be Republicans and Democrats, liberals and conservatives. It will be a moment of common ground. Bob was my closest and dearest friend. His hope and mine is that our friendship will serve as an example to others of what can be and must be if we are to survive as a nation.

Argue, yes, but don’t demean the humanity or patriotism of someone with whom you disagree. Bob always urged people to sit down and listen to someone who belongs to a different political party, a different religion, a different ethnic or cultural group. You might not end up agreeing with each other, he said, but you will better understand the other person.

It remains good advice. We could honor him and make it his legacy if more of us followed that advice. Rest in peace, Bob. You have finished the race and kept the faith. We will meet again.