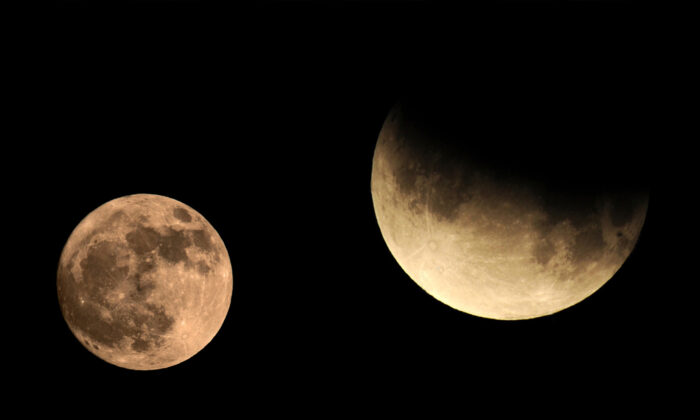 Composite images of the moon. (Dr Kar/worldswildlifewonders/Both from Shutterstock)
Science

Beaver Moon Lunar Eclipse 2021: When and How To Watch in North America This Week

The next lunar eclipse—also known as a “Beaver Moon”—will be visible across North America in the early hours of Friday and is set to be the longest of the century—and the longest in nearly 600 years.

According to NASA, this year’s Beaver Moon will be at its fullest at 4:02 a.m. on the morning of Nov. 19 and will peak at a 97 percent near-total lunar eclipse. This means that nearly all of the moon will be in full shadow and only a small sliver of the left side of the moon will shine in the partial shadow of the Earth.

The arc of the Earth’s shadow then will spread across the moon until the peak of the eclipse at 4:02 a.m., the federal agency said. At this time, 97 percent of the Moon will be in full shadow, turning a reddish-brown color.

The Beaver Moon takes place annually in November when the moon is at its fullest. It was given its name by colonists and Algonquin tribes to mark the time of year when traps would be set for beavers for their fur, according to Thee Old Farmer’s Almanac.

Alternative names for November’s full moon include the Digging Moon (from the Tlingit), the Whitefish Moon, and the Frost Moon.

The moon will appear full for about three days, from Wednesday night through Saturday morning, according to NASA. The agency notes that at three hours 28 minutes and 23 seconds, this year’s lunar eclipse will be the longest between 2001 and 2100.

According to Butler University’s Holcomb Observatory, it is the longest lunar eclipse in nearly 600 years.

Lunar eclipses, unlike solar eclipses, are safe to observe with the naked eye. According to Space.com, those located in the far west will have the best view of the Beaver Moon. It will also be visible in South America, Australia, and parts of Europe and Asia.

AccuWeather meteorologists forecast excellent viewing conditions across much of the Southeast, parts of the southern Plains, and into the lower Midwest.