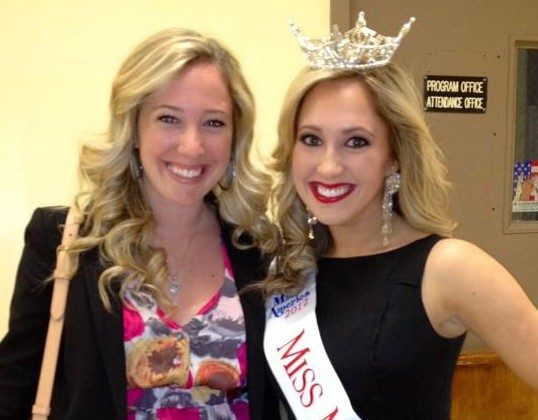 “A lot of people think that it’s a beauty pageant, and that’s the major misconception,” said Katie Berry, newly crowned Miss Manhattan. “It’s not—it’s a scholarship pageant, and the Miss America organization is the largest provider of scholarships for young women in the nation.”

More than $45 million in cash and scholarships were made available in 2011 by the Miss America Organization, according to its website. The Miss New York crown winner competes for Miss America.

More than a dozen local competitions take place across the state, with 20-plus women earning local titles, and the chance to compete in June for the Miss New York crown.

“I’ve been dancing as long as I could walk so I first got into pageants as a way to perform a solo or something I had been working on,” said Katie Berry, Miss Manhattan 2012, and former Miss New Jersey Outstanding Teen. For the pageant’s talent portion she danced to Dion and the Belmont’s 1960’s classic Runaround Sue. “I was really brainstorming going into this pageant—how can I change it up, how can I get away from the classical creation, or the Nutcracker, something that people in the audience hit the snooze button. How can I grab their attention and pull them in.”

Berry works in marketing and events planning. She sat down with The Epoch Times near her workplace, Vacheron Constantin, a luxury watch company. Her job has helped prepare her for the competition’s interview portion, in which five or six judges take ten minutes to ask questions.

“Anything is fair game with these interviews,” Berry said. “You have to be prepared.” She noted that Miss New York works has to have an understanding of national and global issues.

The swimsuit part of the competition requires taking pride in your physical fitness and well-being, Berry said. It’s not about who’s the skinniest, but who exhibits a healthy lifestyle, both body and mind.

“As Miss Manhattan I’m going to go into situations that might be uncomfortable,” she said. “If I have the confidence to be in a swimsuit in front of a whole audience full of people, I don’t think anything else can really compare.”

“One of the most important things for me about the Miss America organization is it is so content-based—it is so based on a girl’s intelligence, her talent, her personality,” said Kaitlin Monte, Miss New York 2011. It doesn’t require “expensive clothes or fancy makeup.”

Monte has earned $45,000 in scholarships, which helped pay off student loans and has enabled her to go back to school. She graduated from the University of Tampa with a bachelor’s degree in performing arts at age 19.

Title winners at all levels can advocate for their chosen issues, or platforms.

Berry, Miss Manhattan, chose as her platform “Unmasking the Stigma of HIV/AIDS.” While attending Fordham University, which she graduated from in May, she created a program called Masquerades, a masquerade ball where all the students wear masks to “unmask the stigma surrounding the HIV virus.”

“It’s a way to associate something positive with something that has a negative connotation, and bring light to the fact that aids is universal,” said Berry. “AIDS affects everyone regardless of our race, our gender, sexual orientation. This is not a disease that we can just sweep under the rug and not talk about.”

Berry works with institutions and programs, such as Momentum, a program that provides meals to people who are HIV-positive. She would like high schools and universities to take up her Masquerades program.

Monte, Miss New York 2011, has been advocating anti-bullying, both physical bullying and cyberbullying.

“It was something I dealt with when I was younger, but more importantly and most of all was the experiences of my two siblings who grew up with severe disabilities,” she said. Her younger brother has a disability similar to autism, while her older sister is severely dyslexic.

Monte’s efforts have included working with legislators to gather information from thousands of students statewide through an anonymous cyberbullying census, and a bill, “crafted by the audience it addresses,” is currently in Albany.

“I was stalked through text message for one and a half years by an ex-boyfriend, and when I reached out to law enforcement they just told me there’s nothing they could do unless he threatened to harm me physically,” said Monte. “Miss New York was just a chance to give people a reason to listen so I could share what I had to say.”